Egypt in Tayside, Central and Fife

Set up by the Montrose Natural History and Antiquarian Society in 1836, the collections in Montrose represent the international connections of the town and its biological diversity. One of the first donations to the museum was given to the museum by a relative of poet Robert Burns, the Mumbai-based physician Dr James Burnes.

The statue that he gifted to the collection was re-identified in 2018 as a Ptolemaic (c332-30 BC) temple musician called Meramuniotes. The collection also includes a small number of New Kingdom shabtis, a stone stela of a man called Teku and several other objects from the Mediterranean and Meopotamia. 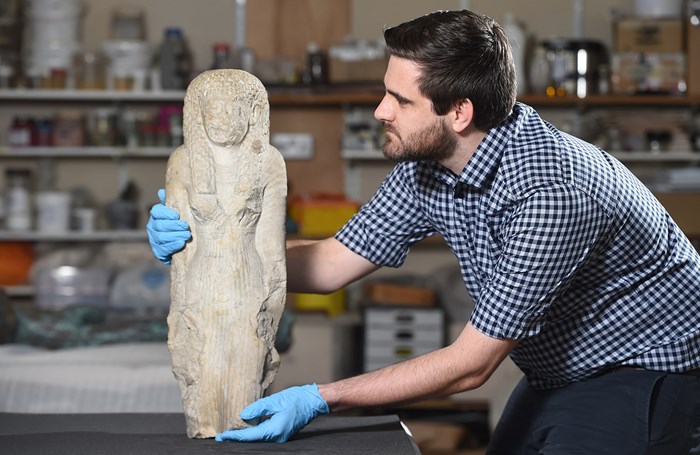 Above: Dr Daniel Potter with Meramuniotes, a statue of Ptolemaic temple musician donated to Montrose Museum in 1837. © Neil Hanna.

The ancient Egyptian collection in Dundee is intimately linked to the work of Rev Colin Campbell (1848–1931) who lived in the city. He was instrumental in gaining support from the local community for the work of the Egypt Exploration Fund and became a local secretary for them.

Another key figure in the development of the collections was the jute magnate and friend of W M Flinders Petrie (1853–1942), James Key Caird (1837–1916). His relationship with Petrie is certain to have enabled several objects to join the collections in Dundee. Caird was also a collector and donated several objects, some of which were potentially obtained during his 1907 visit to Egypt.

Of particular note is the rare and highly important limestone raised relief depiction of Princess Neferure from the Temple of Hatshepsut at Deir el-Bahari, donated to the museum by Caird. It is thought to be the only surviving raised relief depiction of Neferure, daughter of the female pharaoh Hatshepsut. Caird also donated a false door of Sneferu-Ishetef from Mastaba no.2 at Dahshur and a Ptolemaic sarcophagus lid, amongst the close to one hundred objects donated by him and his descendants. The collection covers most of Egyptian history and has a large variety of objects represented. Collections research is actively ongoing.

The collections of ONFife Museums & Galleries are a combination of three previous museums. The group now cares for collections across twelve museums and heritage venues in Fife. The collection includes a number of small objects, with the largest object group represented being Ptolemaic coins. It also includes a New Kingdom shabtis, said to be from the excavations of W M Flinders Petrie (1853–1942) at Gurob.

Please note: No public display of the Egyptian material currently

Perth Museum and Art Gallery was first instituted by the Literary and Antiquarian Society of Perth in 1824, making it one of the oldest purpose-built museums in the UK. The collection of Egyptian material reflects this origin, with several donors associated with the society.

Most of the collection was built up through the donations of private individuals based in Perthshire and Scotland. As such, there are a number of smaller objects such as shabtis, amulets and fragmentary pieces represented alongside objects manufactured for the tourist market.

Of note is a faience scarab of Tuthmose III donated by a Miss Bruce, which is accompanied by a handwritten letter explaining the provenance of the piece by Mansoor, an employee of Shepheard’s Hotel in Cairo. An impressively decorated, but ultimately empty mummy-bundle purporting to be a mummified ibis is also of note.

The collection continued to be expanded by the acquisition of fifteen ceramic vessels from the excavations of John Garstang (1876–1956), which were initially sent to the Sandeman Library. Perth also houses a collection of inscribed linen fragments (presumably purchased) from the Dr James Grant Bey (1840–1896) collection. Dr James Pringle Riach (1825– )of the East India Company and his brother, Major William Alexander Riach (fl.1815), of the 79th Regiment of Foot (Cameron Highlanders) both donated objects to the museum.

Please note: No public display of the Egyptian material currently

Tayside, Central And Fife
Back to top