You are here Home > National and international work > Sharing collections > National projects > First World War centenary
The First World War affected millions of Scots, both at home and in service, and touched the lives of people of Scottish descent all over the world. Our Centenary programme of exhibitions and events shares the Scottish memory of these world-changing events with national and international visitors. 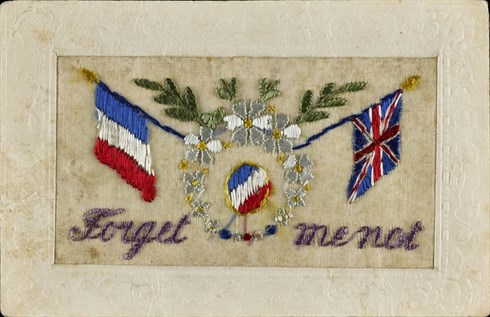 Above: Silk embroidered postcard sent by Private William Dick to his wife in November 1915.

1914 brought war to Scotland on what would prove to be an unprecedented scale. The impact of the conflict would be felt in every part of the country through a range of experiences. Among these was the profound personal experience of separation and loss, an ordeal which Scottish families and communities went through in common with their counterparts among all the combatant nations.

Next of Kin is a touring exhibition that showcases First World War material preserved in collections across Scotland, revealing how families coped with the absence and loss of their loved ones and kept objects as a way of remembering. Through a selection of these family treasures, the exhibition presents a portrait of Scotland at war, where the private lives of Scottish families will introduce some of the major themes and events of the conflict across the fighting fronts.

The exhibition was first displayed at the National War Museum and is now touring nine venues around Scotland, with each partner contributing new, local stories. A suite of digital and learning resources is travelling with the display, and venues are offering a range of events associated with the themes of the exhibition. You can see more information on the tour here.

This project is supported by the Culture Division, Scottish Government and the Heritage Lottery Fund, and is part of WW100 Scotland and the IWM Centenary Partnership.

Common Cause: Commonwealth Scots and the Great War 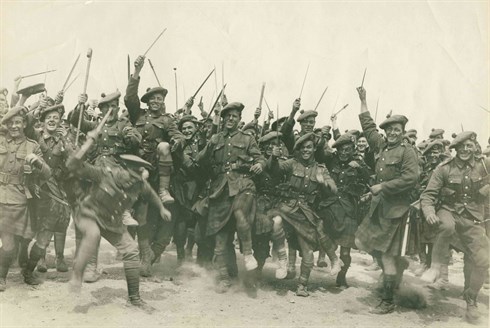 This exhibition explored the stories of the Scottish diaspora and the war experiences of the nations of the Commonwealth during the First World War.

In 1914, as the world prepared for war, thousands of men enlisted in Scotland. But thousands more Scots and those of Scottish descent joined up across the world, and the exhibition shows how they emphasised, adapted or in some cases downplayed their Scottish identities within the context of the armed forces of their home countries.

The exhibition was built around key objects borrowed from the UK and international partners in Canada, South Africa, Australia and New Zealand, some of the main destination countries of the Scottish diaspora. Through contemporaneous newsreel and photography and the words of participants, the exhibition explored how the war was experienced and commemorated in different parts of the British Empire, and how military service was related to other expressions of Scottish identity and culture such as Caledonian societies, Presbyterianism and piping.

Artefacts from the collections of National Museums Scotland associated with individual war experiences reinforced the main themes of migration, dual identity and loss, and extended the geographical scope of the exhibition.

You can find out more about the exhibition here.

This exhibition was supported by the International Division, Scottish Government and is part of the Year of Homecoming 2014.

As the Centenary of the outbreak of the Great War approaches, the stories and knowledge of this conflict are no longer in living memory, contributing to the history being perceived as distant and disconnected from many individuals today. However, the links are still there through personal stories, objects and museum collections. We sought to develop these local stories as a way of understanding the scale and impact of the Great War at the time, its on-going legacy today and its effect on current conflict throughout the world.

This project is now complete and you can find out more about it here.

This project was developed in partnership with the National Portrait Gallery, London, and funded by the Paul Hamlyn Foundation.

National Museums Scotland is providing a schools programme for both primary and secondary schools focussing on First World War heritage and commemorations.

Explore the museum’s powerful exhibits, share in an Act of Remembrance, and develop a knowledge and understanding of the world by writing poems of war and peace with the Scottish Poetry Library. You can download an information sheet here [PDF 265KB].

Get to grips with First World War trench warfare by examining evidence in our object handling collection and first-hand accounts of wartime experiences, including letters and photographs.

Through photographs and clothing discover what it was like for the pilots who flew in the war. Find out why the Germanic Ocean changed its name and how the east coast of Scotland became the front line.

Discover more about how a farmer’s field in East Lothian became an important First World War Airfield. Visit the new Military and Civil Hangars, where each aircraft is accompanied by a touchscreen with original film, photographs and interviews with people who designed, built and flew them. During this session, explore the use of aircraft during the First World War through photographs and our specially-assembled object handling collection.

First World War: Stories From Around the Commonwealth
National Museum of Scotland

In these activities storytellers brought to life the war experiences of Scottish soldiers from Commonwealth nations during the First World War. Participants heard about the Springbok who was a lucky mascot and the bagpipes hidden in a Scottish school for decades.

Discover how the First World War put the East of Scotland on the front line.

Common Cause: Commonwealth Scots and the Great War
Stuart Allan and David Forsyth

A richly-illustrated book to accompany the exhibition, offering an object-led exploration of the Scottish diaspora in the First World War and the impact of the war in shaping national identities among the nations of the Commonwealth.

This book is the outcome of a Royal Society of Edinburgh-funded collaboration between National Museums Scotland and the University of Edinburgh’s Scottish Centre for Diaspora Studies. It is based on the presentations and papers delivered for the Research Workshop “Wha Bears a Blade for Scotland?”: The construction of Scottish diasporic military identities, c1880- present day, an international research seminar held in March 2012, and a wider public engagement one-day research conference held at the National Museum of Scotland in September 2012. This book, published by Edinburgh University Press in April 2016, includes a First World War element and is complementary to Common Cause. Find out more here.

This book of essays from established and emerging scholars examines the impact since 1600 of out migration from Scotland on the homeland, the migrants and the destinations in which they settled, and their descendants and ‘affinity’ Scots. Chapter eight by Stuart Allan and David Forsyth deals with the subject of Common Cause, the Scottish diaspora in the First World War. 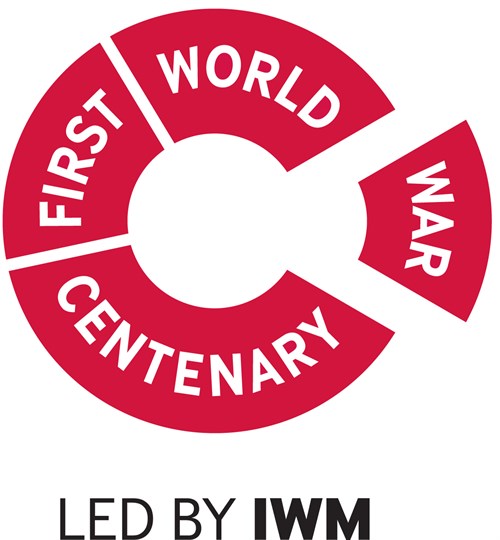 Next of Kin touring project
Schools programme
Back to top