You are here Home > National Museum of Scotland > Things to see and do > Past exhibitions > Primordial
This exhibition has now closed.

Acclaimed contemporary Australian artist Danie Mellor devised this intriguing exhibition, which navigated between his own highly evocative works on paper developed from selected objects in the World Cultures Collection of National Museums Scotland, and his own indigenous and European heritage.

The historical and colonial obsessions of Mellor's work respond to an array of wonders from the worlds of science, technology and nature, suggesting ways of appreciating the complex intertwined narratives of Scotland and Australia.

In the film below, Mellor discusses the exhibition and how it relates to his work with Assistant Curator Ross Irving. 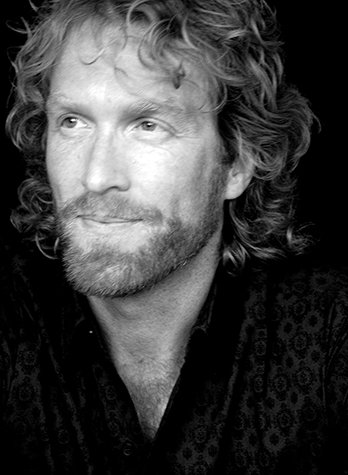 Danie Mellor is an artist whose work explores  historical intersections and relationships between Indigenous and Western cultures. His work has been shown in significant exhibitions in regional, state and national galleries, and is represented in most permanent national, state and also private collections in Australia and overseas.

In 2008 he was awarded the National Works on Paper John Tallis Acquisitive Award, and in 2009 received the Indigenous Ceramic Art Award and also the 26th Telstra National Aboriginal and Torres Strait Islander Art Award. In 2010 he won the Adelaide Perry Prize for Drawing, and his work was again included in unDisclosed the 2nd National Indigenous Art Triennial in May 2012 at the National Gallery of Australia.

Recent exhibitions have included Sakahàn, the inaugural international survey of Indigenous art at the National Gallery of Canada in 2013, Australia at the Royal Academy in London, Kogei Triennial at the 21st Century Museum of Contemporary Art in Kanazawa, Japan and a major survey exhibition at the University of Queensland Art Museum in 2014.

Find out more at www.daniemellor.com.

Primordial: SuperNaturalBayiMinyjirral is presented by National Museums Scotland and the Edinburgh International Festival. With the support of Michael Reid, Sydney, Australia.

Part of the Edinburgh Art Festival.