You are here Home > National Museum of Scotland > Things to see and do > Past exhibitions > The Tomb
This exhibition has now closed.

This exhibition presented the story of one extraordinary tomb, built around 1290BC and reused for over 1000 years.

The Tomb was constructed in the great city of Thebes shortly after the reign of Tutankhamun for the Chief of Police and his wife. It was looted and reused several times, leaving behind a collection of beautiful objects from various eras. These are displayed alongside objects found in nearby tombs, giving a sense of how burial in ancient Egypt changed over time.

The Tomb’s final use occurred shortly after the Roman conquest of Egypt, when it was sealed intact with the remarkable burials of an entire family. The exhibition came ahead of the new Ancient Egypt gallery, which opened at the National Museum of Scotland in 2019. 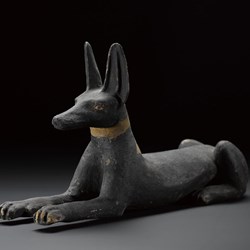 The Tomb presents the story of one extraordinary tomb, built around 1290BC and reused for over 1000 years. Today we are still learning about ancient Egyptian burial practices through objects found in the Tomb.
Watch

Story
360 ° Highlights from The Tomb

Our stunning ancient Egypt exhibition The Tomb presented the story of one extraordinary tomb, built around 1290BC and reused for over 1000 years.
More 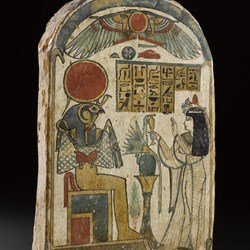 Search our collections
The Tomb

Explore the fascinating Egyptian objects on display in The Tomb exhibition.
Search 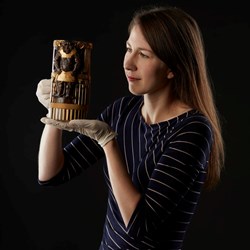 Rare missing fragments have been reunited with a box that has been in the National Museums Scotland's collections for 160 years. Dr Margaret Maitland explains the significance of the spectacular box and the story of the missing portions.
Read

A unique, full-length mummy shroud, which is over 2,000 years old yet is still in remarkable condition, has been discovered in National Museums Scotland’s collections.
More

This box inscribed with the name of Pharaoh Amenhotep II is one of the finest examples of decorative woodwork to survive from ancient Egypt.
More