You are here Home > Press office > The Typewriter Revolution
A new exhibition at the National Museum of Scotland will examine the social and technological impact of typewriters over more than 100 years, from early prototypes to stylish mid-century models, which are still in use today.

A new exhibition at the National Museum of Scotland will examine the social and technological impact of typewriters over more than 100 years, from early prototypes to stylish mid-century models, which are still in use today.

The Typewriter Revolution charts the development of these iconic machines and explores their role in society, the arts and popular culture through the personal stories of those who designed, made and used them.

The Typewriter Revolution draws on National Museums Scotland’s significant typewriter collection, with highlights including an 1876 Sholes & Glidden typewriter which was the first to have a QWERTY keyboard, a 1950s electric machine used by Whisky Galore author Sir Compton Mackenzie, and the 1970s design icon, the Olivetti Valentine.

“The typewriter is a true icon. It revolutionised the workplace, transformed communications and inspired artists and writers. From the clatter of its keys to its unique aesthetic, the enduring romance surrounding the typewriter has earned it many devoted fans. This charming exhibition takes visitors on a journey from its inception as a curious piece of cutting-edge technology through its role as a crucial mainstay of the workplace right up to the present day, where it enjoys cult appeal.” 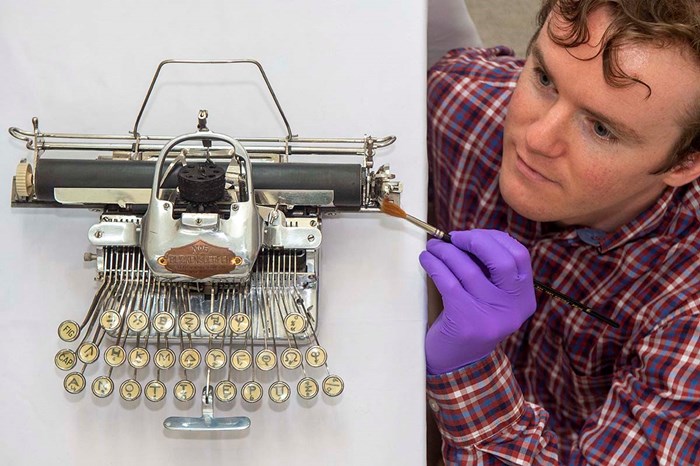 Typewriters were first shipped across the Atlantic by American firm E. Remington & Sons in the 1870s. They were luxury devices which cost the equivalent of half the average annual salary.

Sewing machine salesman John J. Deas was an early enthusiast. Adverts for his business in Dundee and Aberdeen claimed the typewriter would “do for the ink-bottle and the pen, what the sewing machine has done for the needle”.

The final decade of the 19th century saw a huge boom in the demand for typewriters as
organisations began to realise their value, and by 1900 they had revolutionised the world of
communications, transforming office work and opening up new employment opportunities,
especially for women.

They inspired novelists and artists, with Mark Twain among the first to use what he called a “new-fangled writing machine”. Henry James liked the loud clacking of a Remington typewriter and found that his inspiration dried up when he upgraded to a quieter model. Jack Kerouac typed out On The Road on a 36 metre-long manuscript because he wanted to write continuously.

In the late 1940s the Italian firm Olivetti opened a factory in the east end of Glasgow, later producing stylish models such as the Lexikon 80, and the portable Lettera 22 which were seen as the cutting-edge of design. Typewriter technology advanced to include electric models from the 1920s before the rise in computers saw them gradually phased out of offices. However, the unique experience of writing on a typewriter and the enduring beauty of their design mean there is still a demand for the machines.

National Museums Scotland has been awarded the UK-wide, industry standard “We’re Good To Go” accreditation. This means the museums have followed Government and public health guidelines, have carried out Covid-19 risk assessments and have the appropriate processes in place.

Further information on exhibition and images from: Alice Wyllie, Press Office on 0131 247
4288 or email a.wyllie@nms.ac.uk

Galloway Hoard yields another exciting discovery, the name of a Bishop Hyguald inscribed on rare rock crystal jar
A rare rock crystal jar found wrapped in textiles as part of the Galloway Hoard has been conserved, revealing a Latin inscription written in gold. The inscription says the jar was made for a bishop named Hyguald.
Find out more
National Museums Scotland gifted rare collection of 17th century Scottish silver
National Museums Scotland have acquired a trio of exceptionally rare silver objects created in Scotland in the 1600s. The quaich, trumpet bell and mazer are important examples of 17th century Scottish craftsmanship and have been donated to the National Collections by Ron and Rosemary Haggarty.
Find out more
New book gives fresh perspective on Scotland’s Viking-age foundations
Crucible of Nations reveals Medieval Scotland as a melting pot of ideas.
Find out more
National Museums Scotland Acquires Armorial Panels Associated With Marie de Guise, Mother of Mary Queen of Scots
A series of oak armorial panels from a house inhabited by Mary Queen of Scots’s mother Marie de Guise, Regent of Scotland and wife of James V, have been acquired and conserved by National Museums Scotland. The announcement coincides with the birth date of Mary, Queen of Scots (8 December 1542).
Find out more
Anatomy: A Matter of Death and Life
A major new exhibition at the National Museum of Scotland will look at the history of anatomical study, from artistic explorations by Leonardo da Vinci to the Burke and Hare murders.
Find out more
Back to top