Opening in spring 2019, the Art of Ceramics will celebrate the creativity found in ceramic pieces from around the world and across a broad time period. Its creation has been made possible thanks to generous funding from The Sir James Miller Edinburgh Trust. It will be known as the Sir James Miller Gallery, in memory of Sir James Miller, a Scottish businessman and politician, who served as Lord Provost of Edinburgh and Lord Mayor of London.

Art of Ceramics will open alongside two new galleries devoted to ancient Egypt and East Asia, as part of the final phase of the ambitious £80 million transformation of the National Museum of Scotland.

Ceramics are one of the earliest man-made materials, dating back around 30,000 years. They have been a global artistic medium for millennia, employing an immense variety of technologies, forms, styles and designs. The properties of ceramics mean that they have wide application across industry, science and technologies, and they have been a key component in global trade for thousands of years; as vessels for products, and as objects of desire.

Objects on display will include both artworks and ceramics with scientific and technological applications. Highlight objects will include an 18th century Meissen dish made for the Stadholder of Holland, Willem V Prince of Orange; highly decorative ancient Greek pottery; an earthenware figure by contemporary Dundee artist Stephen Bird; a Persian 13th century bowl in a turquoise blue glaze and the nose cone from a British Aerospace Skyflash air-to-air missile.

"Our new ceramics gallery will explore the artistic and practical applications of this material, and alongside two other new galleries, marks the completion of our Masterplan to transform the Museum and showcase the breadth of our world-class collections. We are grateful to the Sir James Miller Edinburgh Trust for their generous donation which has made the creation of this fascinating gallery possible."

"We have watched the redevelopment of the National Museum of Scotland take shape over the last 15 years and seen it achieve national and international recognition. We were therefore delighted to have the opportunity to be involved in this visionary project by supporting the creation of this remarkable gallery." 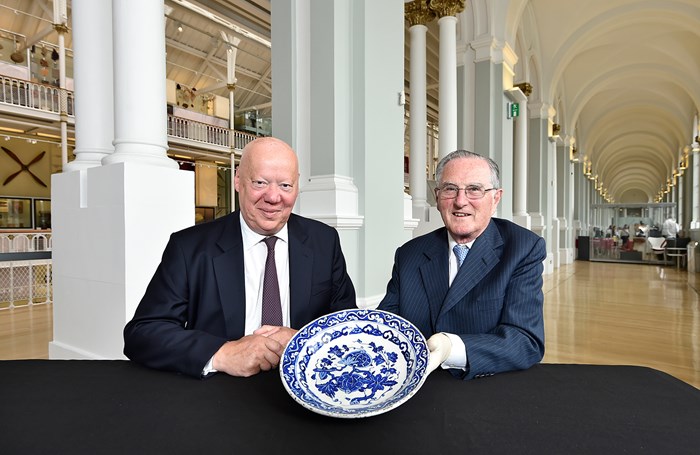 Further information on exhibition and images from:
Alice Wyllie, Press Office on 0131 247 4288 or email a.wyllie@nms.ac.uk