A Stirling engine is powered by hot air rather than steam. Now 200 years old, its revolutionary technology has become even more relevant today.

Made by the inventor soon after his original patent of 1816

Stirling engine systems installed in submarines can extend the period spent underwater from a few days to weeks as well as making them much quieter – two great advantages when secrecy is of the utmost importance.

200 years of the Stirling engine 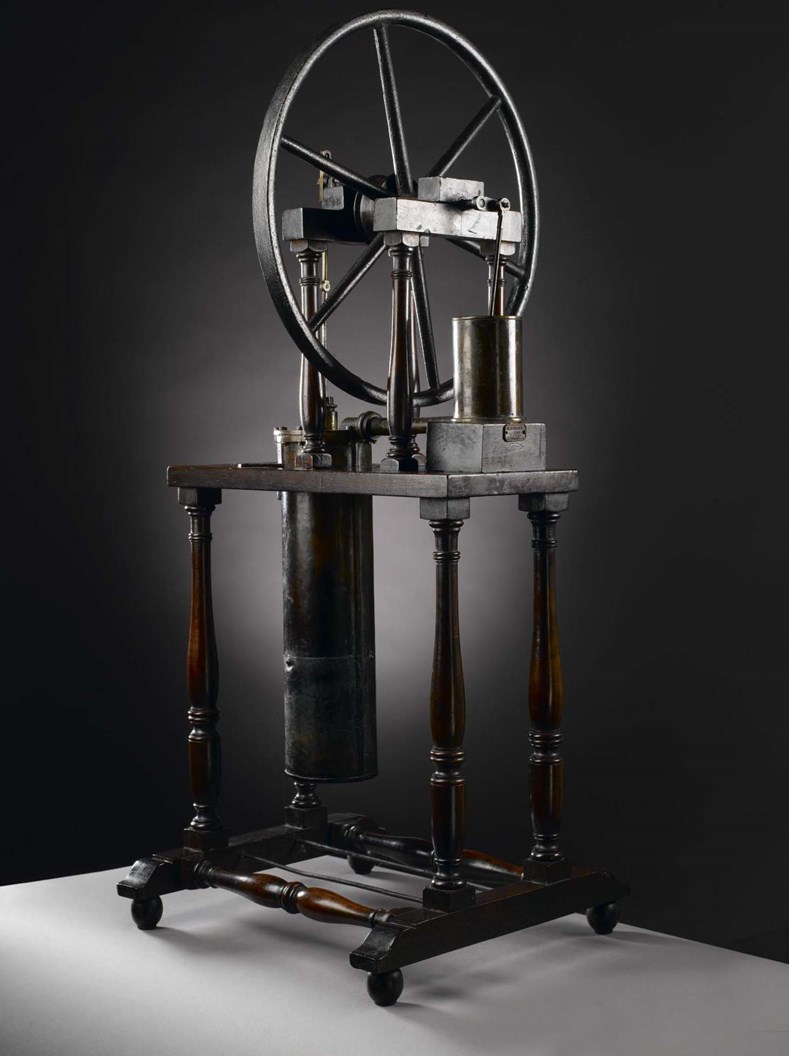 Above: Model of Stirling engine at the National Museum of Scotland.

In July 2016 we opened our exciting new gallery Energise as part of a suite of six new galleries showcasing the remarkable Science and Technology collections at the museum.

With thousands of items to choose from, selecting objects for a new gallery can be an exciting but also daunting task. The size, historical significance, conservation and display requirements and the potential to tell engaging stories all come into play. But exploring the sources, generation, distribution and use of energy over the last 200 years, the Energise gallery was the perfect opportunity to showcase the often overlooked Stirling engine.

The Energise gallery on Level 5, Science and Technology galleries. Experiment with electric circuits, plan a wind farm or make your own waves in out test tank and challenge yourself on the giant Energy Wheel.

What is a Stirling engine?

A Stirling engine is a hot air engine, powered by hot air rather than steam. Generally simple, easily constructed engines, they convert heat energy into mechanical energy. The air is alternatively heated and cooled, so that the expansion caused by the heating drives a piston. Stirling engines are noted for their efficiency, quiet operation, and ease with which they can use almost any heat source.

Above: Robert Stirling's engine patent of 1816.

Some work had been done around the idea of hot air engines prior to Robert Stirling, but his key innovation was what he called an ‘economiser’ which he patented with an engine incorporating it in September 1816. Now known as a regenerator, this technology was designed to reuse wasted heat from the engine. This improved efficiency as heat could be stored and reused, reducing the amount of fuel required for operation.

Model of Robert Stirling's hot air engine made by the inventor at the time of his original patent in 1816.

Who was Robert Stirling?

Reverend Robert Stirling was a Church of Scotland Minister with a strong interest in engineering. He was born in Perthshire in 1790 and at the age of 15 began his studies at the University of Edinburgh which included physics. He left Edinburgh in 1809 to study Divinity at the University of Glasgow and returned to Edinburgh to continue as a student of Divinity in 1814. 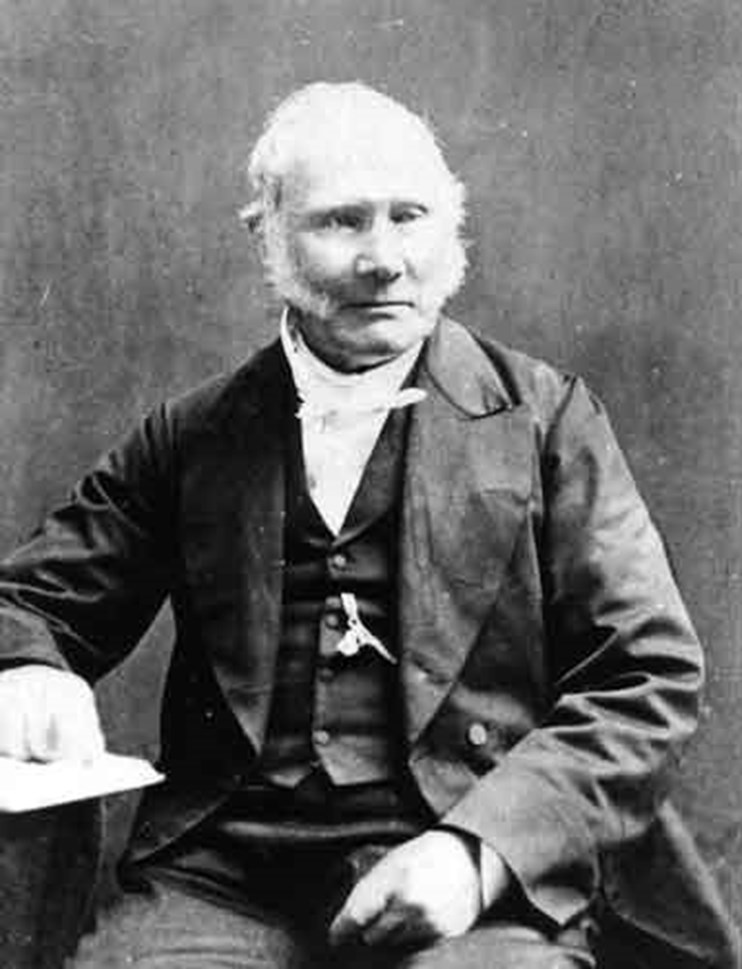 By 1816 Stirling was appointed to a position at the Laigh Kirk, Kilmarnock. Shortly after this, he submitted his first patent in Scotland. It would seem that an interest in engineering ran in the family. His grandfather invented a threshing machine, and his brother James was a civil engineer. Robert worked closely with his brother to develop and refine the hot air engine technology which would not be coined the ‘Stirling’ engine until around 100 years after its development. 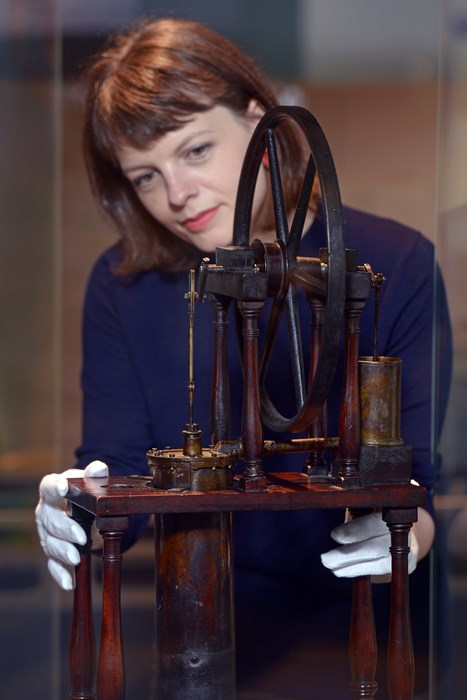 Above: Stirling model during installation in Energise gallery at National Museum of Scotland ©Neil Hanna.

The University of Edinburgh engine is recorded as having been used by John Leslie, Chair of Natural Philosophy, as a classroom demonstration. It was initially loaned to the museum in the 1960s before being gifted in 1975 for preservation. Prior to going on display in the Energise gallery it was the most requested object from the Technology collection in storage. The model remains in remarkable condition for its age, this may be in part because it was not demonstrated and repaired to the same extent as the Glasgow example. 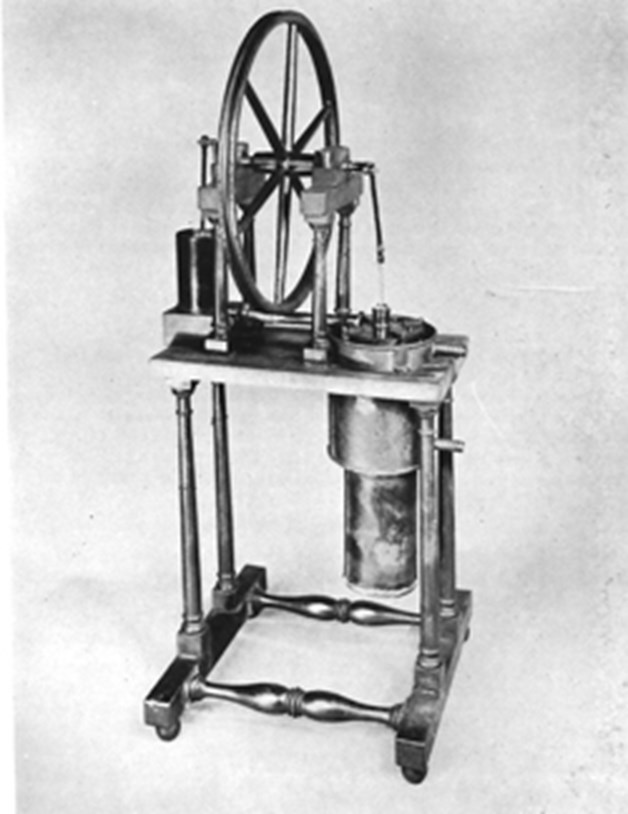 The model donated to the University of Glasgow was left in storage for 20 years before it was re-discovered in 1847 by William Thomson, later Lord Kelvin. It was used by him in his pioneering investigations into the fundamentals of thermodynamics. University records show that it was still working and in use regularly for lecture demonstrations in the 1870s, 30 years after Thomson had first found and repaired it. This example is now on display in the Hunterian Museum at the University of Glasgow.

A full-sized Stirling engine was built and used from 1818 to pump water from a quarry, after which some success followed, but manufacturing problems coupled with the difficulty of getting investors meant that steam technology continued to dominate.

During the second half of the 19th century many small hot air engines were built to pump water, blow church organs and generate electricity. There was some interest for domestic use but by the early 1900s it was widely replaced by affordable electric motors. By the 1930s, the Stirling engine was largely forgotten.

But that is not the end of the story as Stirling engine technology has undergone somewhat of a renaissance in the last 50 years. It has been trialled for use in hybrid electric cars, has been successfully used to power submarines, and can be driven in reverse to operate portable refrigeration systems. It’s potential as a clean, efficient and reliable source of power has increased interest in recent years due to its compatibility with renewable energy sources. Used in combined heat and power systems it can reuse waste heat, improving efficiency. Placed at the focus of a parabolic mirror, a Stirling engine can convert solar energy to electrical energy and huge Stirling dish plants have been created in hot areas such as Phoenix, Arizona. Stirling technology is even trialled by NASA for use in space. 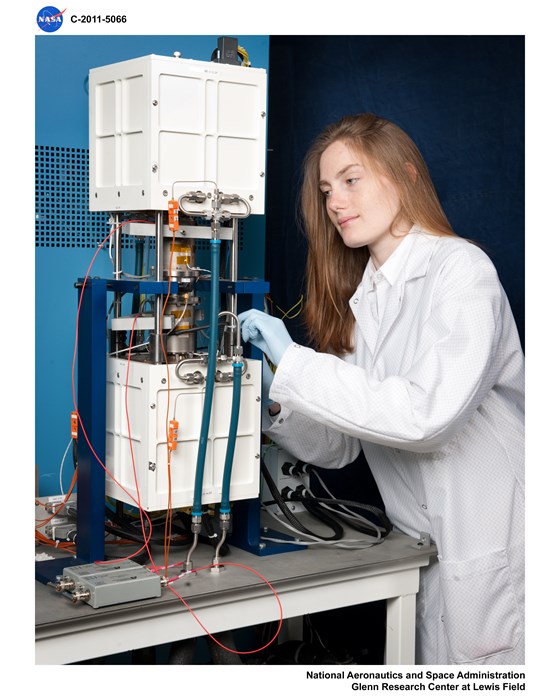 Stirling’s creation is often overlooked, but this was a revolutionary engine. It tells a story not only of creativity and innovation, but of a humanitarian effort to improve industrial working lives in the 19th century. It is also a story of the longevity of a technical concept and as conventional fuels become scarcer, the ideas of Rev. Robert Stirling 200 years ago are of more relevance today than ever before.

27 September 2016 marks the 200th anniversary of Robert Stirling’s first patent for his ‘heat economiser’ and engine in Scotland. Here’s to the little engine with great future potential!