The Fabric of Life: Early Polynesian barkcloth in context

You are here Home > Collections & Research > Collections departments > Global Arts, Cultures and Design department > Projects > The Fabric of Life: Early Polynesian barkcloth in context
This collaborative project combined research on one of the founding collections of the National Museums Scotland and fieldwork with contemporary makers in Polynesia to investigate the history, changing nature and present-day significance of barkcloths, many of which date back to the first European exploratory voyages in the Pacific region.

National Museums Scotland’s World Cultures collections comprise an assemblage of over 140 barkcloths which, in 1854, were donated by the Natural History Museum of the University of Edinburgh to the newly founded Industrial Museum of Scotland, a predecessor of the National Museum of Scotland. The barkcloths display a fascinating array of different textures, colours and intricate designs typical of various island groups in Polynesia, with some of the patterns looking surprisingly modern and even reminiscent of 20th century European designs. 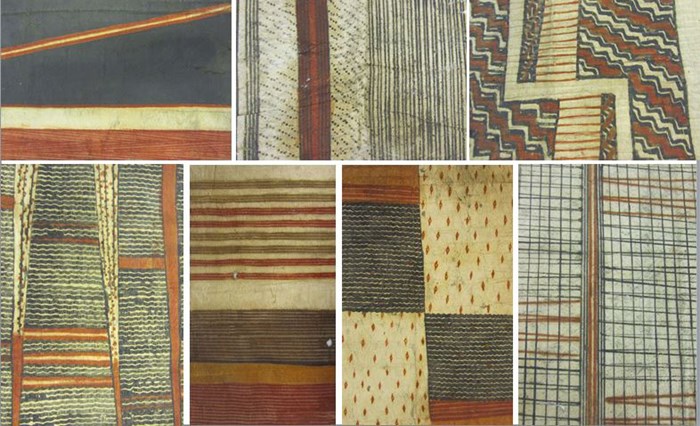 Details of Hawaiian barkcloths from the University Collection.

The Fabric of Life: Early Polynesian barkcloth in context

In size the cloths range from small, cut-out pieces to large spreads of fabric. We know that some of them were collected during the voyages of Captain James Cook, and thus belong to the earliest examples of Pacific material culture to have reached Europe. But because much of the original documentation has not survived, little is known about the majority of the pieces that constitute this exceptional, yet under-researched and largely unknown collection. 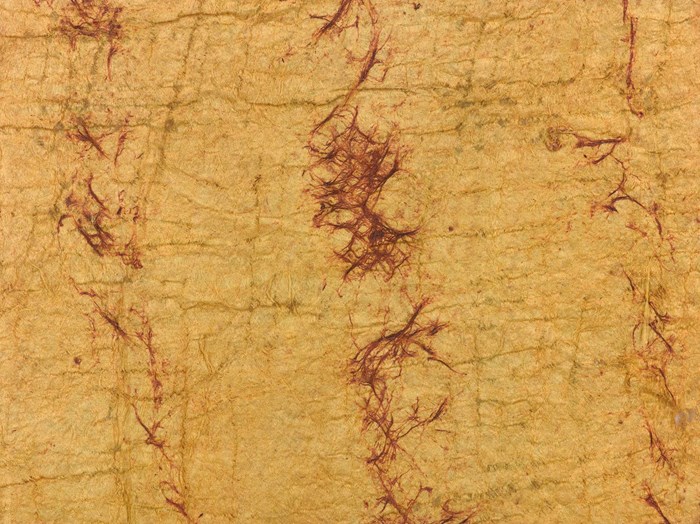 Detail of A.UC.802, a barkcloth made from paper mulberry (Broussonetia papyrifera), dyed yellow and with decorative dark red fibres (possibly Pipturus albidus) beaten in into the light fabric.

In spring 2017 the Swiss foundation Kunst und Handwerk awarded £39,000 to National Museums Scotland to support research into the history of these barkcloths, to shed light on relationships to other collections in the United Kingdom, Europe, America and the Pacific region, and to explore the significance of this historical material in the eyes of contemporary artists living and working in Oceania today. 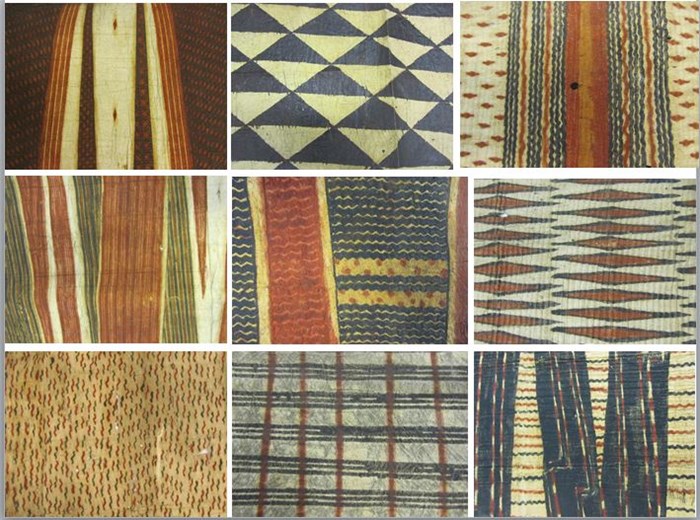 Samples of barkcloths from the University Collection at National Museums Scotland.

The 20-month project ran until the end of 2018. Initially the focus was on archival research, a close examination of the material and professional photography, which allowed us to review the collection and reassess as well as improve existing records and documentation. Because barkcloth, particularly in the late 18th century and the first half of the 19th century, was often cut up to be traded and exchanged between collectors and institutions, relations to other collections can be traced through distributed materials.

These fascinating relationships, which highlight how closely Scotland was connected with other parts of the world, were investigated through visits to, and collaboration with, colleagues in institutions such as the Hunterian Museum, Glasgow, the Pitt Rivers Museum, Oxford, the British Museum, London, the Museum Fünf Kontinente, Munich, the Historisches Museum, Berne, the Bishop Museum, Honolulu, the Museum of New Zealand Te Papa Tongarewa, and others. 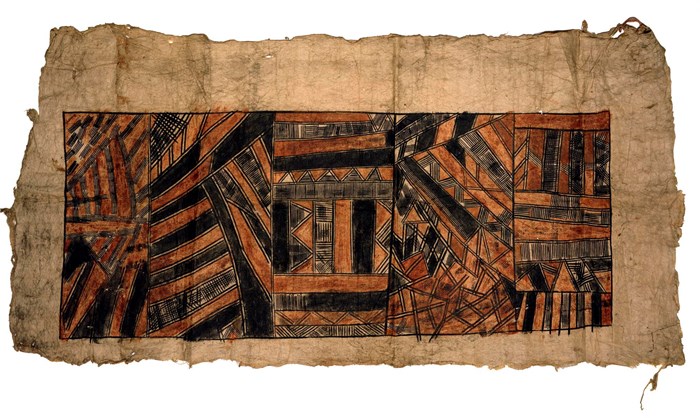 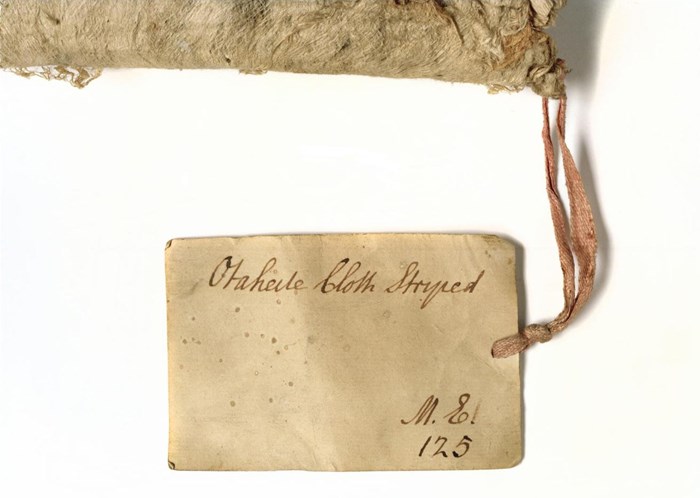 Old label attached to A.UC.442 written by Professor John Walker, Keeper of the University Museum from 1779 to 1803, showing the original number in the University Collection; through this label the barkcloth can be linked to the voyages of Captain Cook.

In a second strand, the project examined the contemporary practices and the present-day significance of the historical material through research in the Hawaiian Islands and New Zealand with artists and makers who are keeping the tradition alive and developing it into the future. We also worked in collaboration with the researchers of the AHRC funded project Tapa: Situating Pacific Barkcloth in Time and Place, based at the Centre for Textile Conservation and Technical Art History of the University of Glasgow to investigate materials and questions of analysis and conservation. 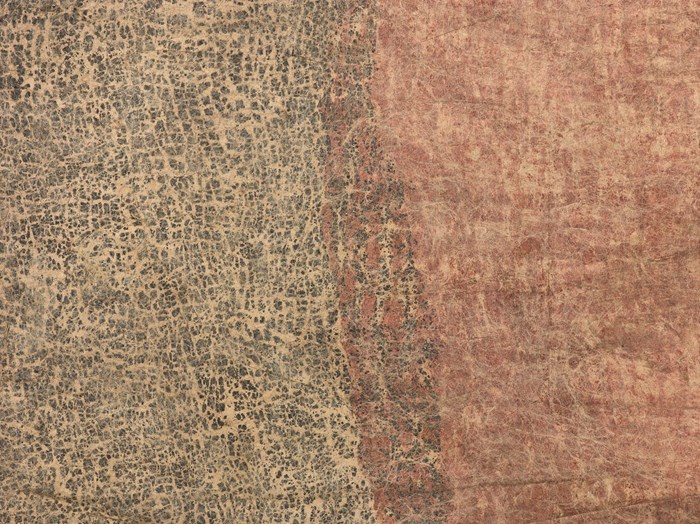 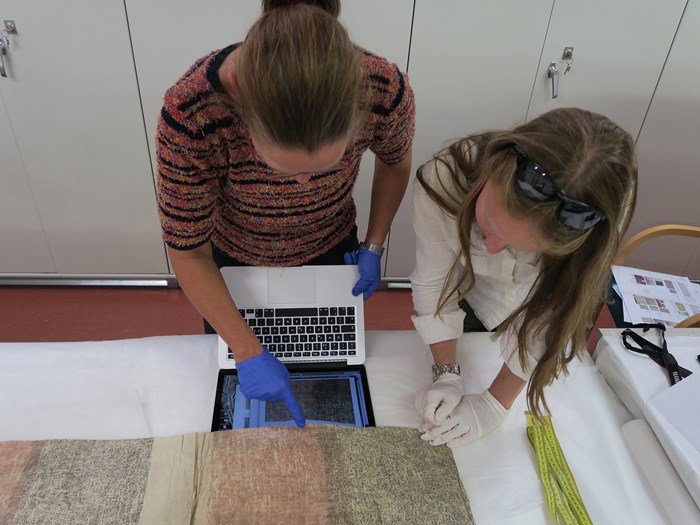 Antje Denner and Fiona Reilly in the storage area of the National Museum of Ireland in Dublin comparing barkcloth 1881.2651 with a digital image of barkcloth A.UC.441 held in Edinburgh.

The results of the research into the history and contemporary significance of the early barkcloths of the University Collection at National Museums Scotland and the findings concerning materials, functions, use and designs in past and present have been made accessible through our online database and in a number of forthcoming research articles.

The slideshow below shows a selection of 110 samples that are part of a compilation bound in half-calf, the majority of these samples were cut from larger pieces of barkcloth that still remain in the Museum’s University Collection.