A 228 million year old fossilised turtle is helping scientists fill a key gap in their understanding of the evolution of the group.

A fossilised turtle found in southwestern China is helping scientists fill a key gap in their understanding of the evolution of the group. At 228 million years old, the fossil shows the early stages in their complex evolutionary history. The discovery is detailed in a new paper published in the journal Nature.

The 2.3m-long skeleton is nearly complete and was discovered in Guizhou Province, southern China. Named Eorhynchochelys sinensis (meaning dawn beaked turtle from China), it lacks the carapace and plastron (shell) that is so characteristic of a turtle, but the ‘scaffolding’ for the building of the shell is clearly in place. The extremely broad ribs are spread out to the sides forming a wide, oval-shaped body just like a modern-day turtle. There is also good evidence to indicate that the snout of the new turtle was developed into a beak covered with a thin horny sheath just like so many living members of the group. 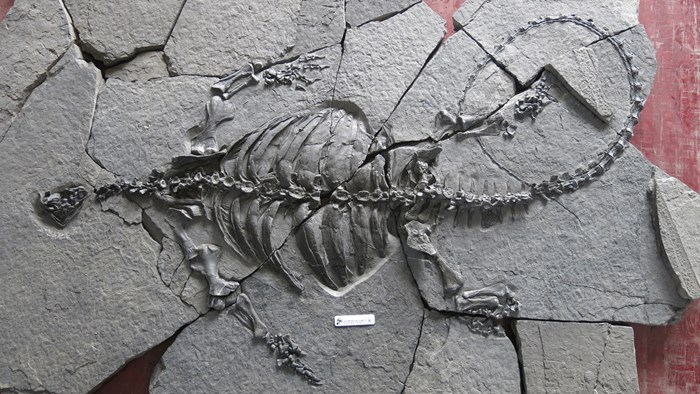 “This impressively large fossil is a very exciting discovery that gives us another piece in the puzzle of turtle evolution. It shows that early turtle evolution was not a straightforward, step-by-step accumulation of unique characteristics but was a much more complex series of events that we are only just beginning to unravel.”

When Fraser first saw the fossil it was still encased completely in rock, and only the vague outline of the body could be seen:

“Even then it was clear that this was a bit of a monster and unlike anything else I had seen in these very rich deposits. A turtle was just one of many things that went through my mind, but I was truly stunned when I saw the whole fossil fully prepared.”

Above: Artist's impression of the turtle. Copyright: Yu Chen, IVPP.

Dr Fraser co-authored the study with colleagues at the Chinese Academy of Sciences, the Field Museum of Natural History and the Canadian Museum of Nature. This international team believes the new form was probably an inhabitant of coastal waters foraging on land as well as in the water, searching the mud along the shore using its powerful limbs in a similar way to many living pond turtles.