You are here Home > Collections & Research > Collections departments > Natural Sciences department > News > Fossil embryo
An exquisitely preserved fossil of an embryo of extinct marine reptile has been described from China from rocks that are about 245 million years old.

An exquisitely preserved fossil of an embryo of extinct marine reptile has been described from China from rocks that are about 245 million years old. The curled-up embryo is about 3.5 cm in diameter and even the minute and very slender gastralia (“abdominal ribs”) are beautifully displayed. If we were able to unroll the embryo we would see that it represents a very long-necked animal that is closely related to Dinocephalosaurus - a remarkable animal growing up to 5 metres long and with a neck longer than the tail and rest of the body combined.

Although it is almost certainly a completely new species, the international research team from National Museums Scotland, the Field Museum (Chicago), and Institute of Vertebrate Palaeontology and Palaeoanthropology (Beijing) postulate that the embryo was not contained by an egg shell but that it was enclosed by a soft membrane and the parent gave birth to live young at sea. The researchers refrained from erecting a new name for the reptile: as a neonate it almost certainly has not developed many of the features that would diagnose the adult form and typically palaeontologists only erect new species based on more mature individuals. So the hunt is now on for the parent of such a youngster! 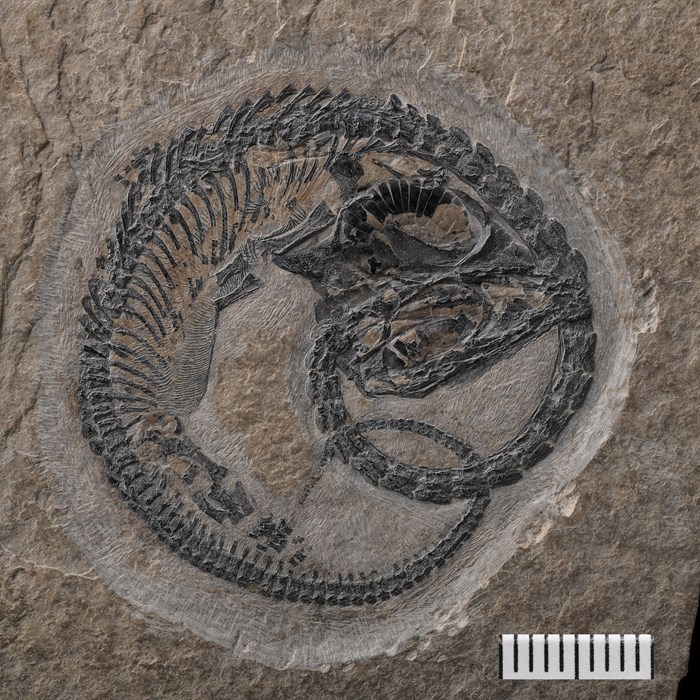