The Triassic sandstone rocks quarried in the Elgin Area yield fossils of some of the oldest relatives of iconic groups such as dinosaurs, pterosaurs and crocodilians. Unfortunately, many of these tantalizing fossils are difficult to study and poorly understood because they are oddly preserved as crumbled bones or voids in sandstone.

The study of these specimens has been revitalised by the advent of cutting-edge technology, such as µCT scanning techniques, which circumvent the major difficulties in manually preparing fossils in the rock.

The first results of this project were recently published in the Earth and Environmental Science Transactions of the Royal Society of Edinburgh. In this study, National Museums Scotland researchers in collaboration with researchers from the Natural History Museum (London), the University of Birmingham, Virginia Tech and the University of Edinburgh, revised the anatomy and taxonomy of Erpetosuchus granti.

Erpetosuchus granti was a cat-size (about 60 cm long including tail), land-dwelling pseudosuchian (the reptile group from which modern crocodiles derive), which was known from a handful of incomplete specimens. The re-evaluation of the fossils from the Elgin area, revealed hidden details of the skeleton of Erpetosuchus and closely related species and helped elucidate their position of in the reptile family tree.

Overall, this study highlights the hidden potential of the Elgin deposits. Future work will focus on other important species of the Elgin Reptile fauna. 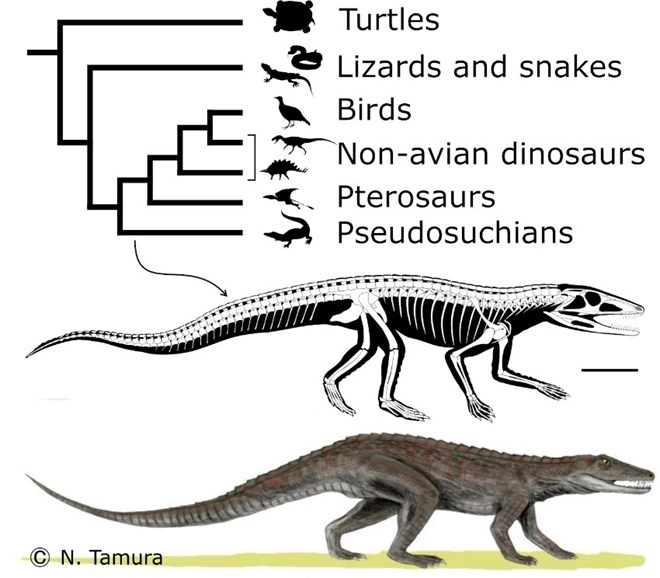