The genetics of Asian lions in zoos

The Asian lion, Panthera leo leo, once had a wide distribution from the Middle East through Iraq and Iran to India, but today it is found in only one location, the Gir Forest National Park and surrounding areas in Gujarat in northwest India. From a low point of perhaps only 20 individuals in the early 20th century, numbers have gradually increased and there were 523 in a census in 2015. Although this is good news, the population is very vulnerable to disease and attempts to establish populations elsewhere in India have not yet been advanced.

In the mid-1990s, a captive breeding population was established in European zoos in order to provide a back-up to populations in zoos and in the wild in India. Nine founders, four males and five females, were imported by London, Helsinki and Zurich Zoos and these have bred successfully so that there were 153 lions at the end of 2016.  However, with such a limited number of founders, there have been problems with inbreeding and as a result cub mortality is quite high.

Since the establishment of the European Endangered Species Programme (EEP) for the Asian lion, National Museums Scotland has been collecting any animals that have died in European zoos, so that we now have probably the largest collection of Asian lions in any museum in the world. At the last count there were 28 specimens, including seven of the nine original founders of the EEP. 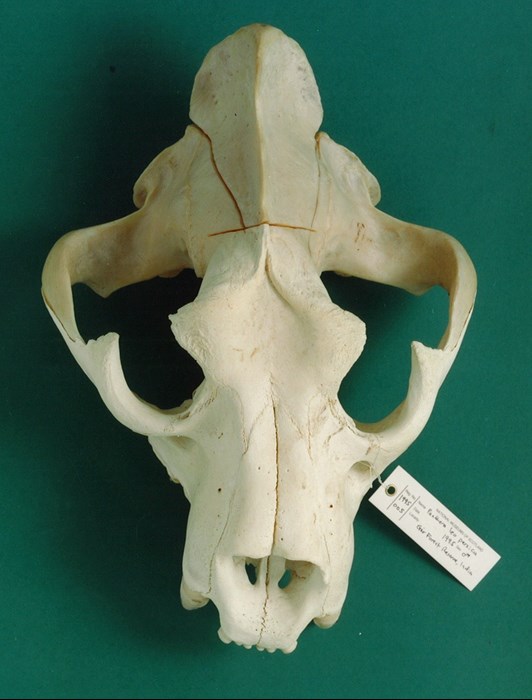 The skull of one of the founders, Arfur, from London Zoo. His skull is slightly warped, probably caused by poor nutrition when he was a cub in India.

Of the 12 microsatellites studied in the European population, only three showed slight variation, with only two different variants or alleles at each one. In contrast, microsatellites in the Indian zoo population showed between four and 11 alleles per microsatellite marker and they all varied. Our results have conclusively shown that the EEP population was established using individuals that represent only a small proportion of the potential genetic variation in the Indian zoo population. Zoos are aware of this and already five new founders have been imported from Indian zoos to bolster the EEP population.