When is a dinosaur an ostrich?

Films and books like Jurassic Park have inspired people and scientists to believe that it may be possible to recover dinosaurs and other extinct animals from extinction. For dinosaurs, this is based on the perception that DNA or proteins like collagen may survive in dinosaur fossils that are several tens of millions of years old. In 2007, Mary Schweitzer and colleagues claimed to have extracted collagen from a specimen of Tyrannosaurus rex that was 68 million years old. In 2009 the same team also claimed to have found collagen in a duckbill dinosaur, Brachylophosaurus canadensis, fossil and in 2017 they reported an expanded sequence of peptides that make up collagen proteins from this dinosaur.

Mike Buckley from the University of Manchester and colleagues elsewhere, including National Museums Scotland, have carefully compared the peptide sequences from the two dinosaurs and found that they match those from the modern-day ostrich. Sadly, this suggests that the results reported previously by Mary Schweitzer and her colleagues are most likely caused by cross-contamination from ostrich collagen which was present in the lab and not likely to have been from either dinosaur. We may just have to wait a bit longer for that Jurassic Park experience. 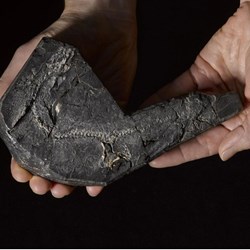