Straddling the Virginia–North Carolina state-line, the Virginia Solite Quarry ranks as one of the most important Triassic (250 - 200 million years ago) sites anywhere in the world. This is the time of the first dinosaurs, but also the first mammals, crocodiles and turtles. The significance of the Solite Quarry was first recognised by Paul Olsen (then of Yale but now Columbia University) in the mid-1970s when he discovered a range of vertebrate fossils together with a remarkable diversity of insects.

Since then, led by Nick Fraser of National Museums Scotland, work at the quarry was continued by a team of international scientists including Paul Olsen and David Grimaldi (American Museum of Natural History). Much of the work to date has been funded by National Geographic and the US National Science Foundation. 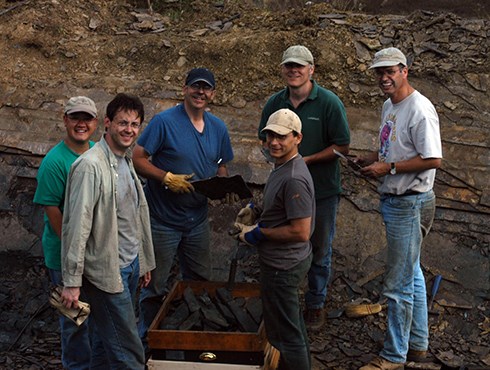 Blagoderov, V., Grimaldi, D.A., and Fraser, N.C. 2007. How Time flies for flies: diverse Diptera from the Triassic of Virginia and the early radiation of the order Diptera. American Museum Novitates 3572: 1-39.

At first sight, the Virginia Solite Quarry is a remarkably inauspicious looking quarry situated in the Piedmont region of the eastern USA. Yet on account of its fossils it is arguably the most significant Triassic locality anywhere in the world. In addition to some archaic-looking reptiles and fishes, the sediments are rich in plant and insect remains. It is the only Triassic locality preserving abundant intact insects, but it is the modern aspect of many of them that is particularly intriguing. Indeed, many almost look as though they have been recently squashed! Tiny thrips (Thysanoptera) just over 1.0mm long preserve details of the wings, and antennae complete with the minute hair-like microtrichiae. Today thrips are a major pest of fruit blossoms and roses. Back in the Triassic there were no flowering plants so they must have fed on other vegetation.

Vladimir Blagoderov originally joined the project as a Postdoctoral Fellow while at the AMNH, but has since joined National Museums Scotland as the Principal Curator of Invertebrates. Together with Dave Grimaldi, he led on the seminal work, "How Time Flies for Flies", which describes the remarkable assemblage of flies in great detail. Of eight families of true flies represented as fossils, four are living today! The quarry is even home to the oldest record of a blood-sucking fly – a species that is very distantly related to mosquitoes.

Another common fossil at the quarry is a belostomatid water bug. Today these large predators can take prey as large as a small fish, and their Triassic predecessors also had very impressive grasping appendages. Another modern flavour to a very ancient fauna. 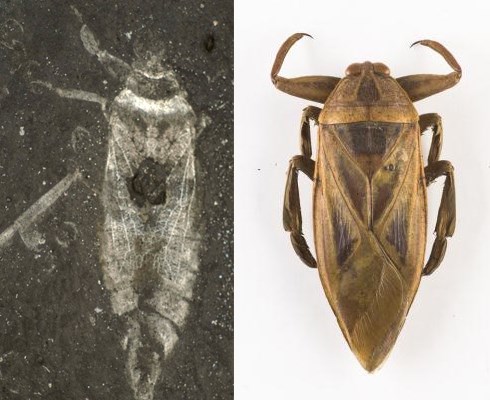 Fossil belostomatid water bug (left) and modern giant water bug, Lethoceras sp (right), which can be seen in the Feeding in Water case in our Animal Senses gallery.

Other insect groups, such as the Blattodea, have a fossil record going back to the Carboniferous. Examples of Blattodea are also known at Solite. National Museums Scotland Principal Curator of Palaeobiology, Andy Ross, later joined the team, contributing to some of the later excavations at the site and providing his expertise on the ancestors of ancient cockroaches.

The vertebrate remains include a number of fishes, but also some rather bizarre reptiles. The first is a little long-necked aquatic reptile called Tanytrachelos and hundreds of individual specimens have been recovered from our excavation. It belongs to a group called the Tanystropheidae which became extinct at the end of the Triassic. A second enigmatic reptile was later discovered which bore extremely elongated ribs, although only a handful of specimens of this form have been discovered. Called Mecistotrachelos, we believe the elongated ribs supported a membrane that could be spread out to form a "wing" allowing the animal to glide away from danger.

The detail preserved on many of the fossils is exceptional. Some of the reptiles have skin and muscle preserved and the insects are almost comparable with insects in amber – but not quite!

The Solite Quarry has given us a vivid picture of life along the shores of an ancient lake around which some of the earliest dinosaurs roamed.

Work is ongoing on the vast range of new fossils that have been collected from the quarry since Paul Olsen’s initial excavations almost 50 years ago. New species of insects are being described and new insights into the life style of the tanystropheids continue to be made.