Gold object of the week No. 1

We start our weekly series where we feature individual gold artefacts of pre-Iron Age date found in Scotland, Wales and north-west and south-west England with this beautiful piece of jewellery, found by Professor Mike Parker Pearson and his team at a remarkable Bronze Age settlement at Cladh Hallan on the Hebridean island of South Uist. The ring dates to the Late Bronze Age, around 1100–1000 BC. 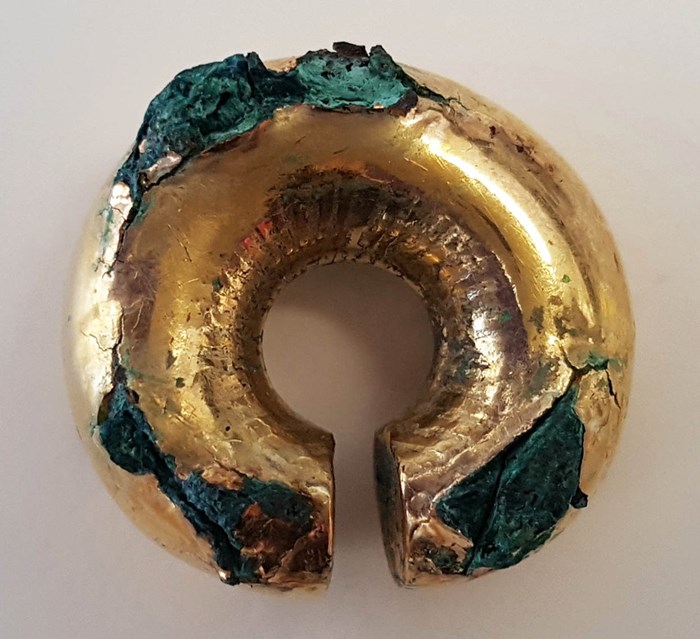 The ring is small – just under 20 millimetres in diameter – and it consists of a penannular (gapped-circle), round-sectioned bar of bronze, covered by a thin layer of gold foil. As the bronze has corroded over the millennia, it has burst through the surface, but it is easy to appreciate just how beautiful this object had been when new. Note the decorative ‘tiger stripes’ on the inner part of the hoop. Under the microscope, the fineness and regularity of these narrow stripes are clear, and we can tell that the object had been used, as some of the stripes on the innermost edge of the hoop have been rubbed away. 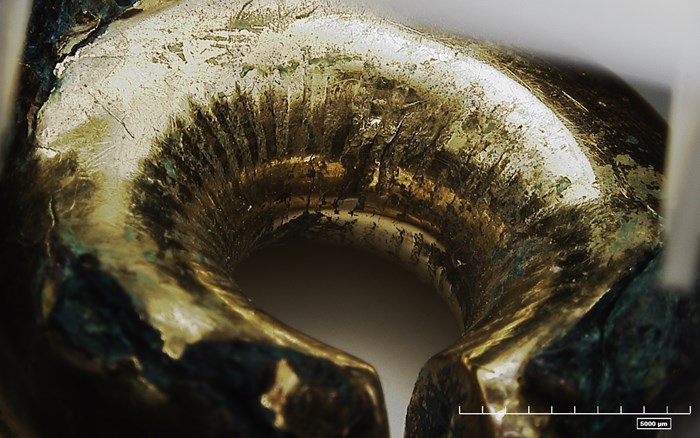 A close up of the gold ring, scale bar 5mm.

We can also see how neatly and crisply the gold covers the ends of the hoop: 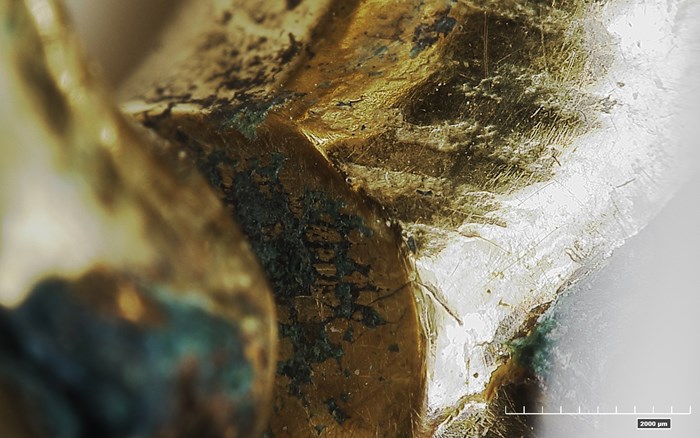 One of the ends of the hoop, scale bar 2mm.

The composition of the object has been analysed by National Museums Scotland's Analytical Scientist Dr Lore Troalen using X-ray fluorescence spectroscopy. This has shown that the core is indeed of bronze, containing a little lead, and the gold foil contains silver, along with some copper and tin. There is around 17% by weight of silver in the foil, and 6% by weight of copper: while the silver content corresponds to what would be expected for British and Irish alluvial (river) gold sources, the amount of copper present suggests that it had been deliberately added, perhaps to give the gold a particular colour. Lore will be determining the composition of the stripes using a Scanning Electron Microscope. They are expected to be made from silver-rich electrum, with a silver content of around 50% by weight. When new, these whitish stripes would have stood out in contrast to the darker colour of the rest of the gold.

Clearly, the metalworker who made this was very skilled indeed. How was it made? It will have started as a bar of bronze, and the gold foil was probably added before it was bent into the hoop shape. It has been so well made that there are no creases in the gold – and you can’t see any joins where the ends of the foil met, either. Making the stripes will have required advanced metalworking skills. A sophisticated technique known as ‘diffusion bonding’ may well have been used, where narrow strips of the silver-rich gold were heated and pressed onto the surface of the pre-heated hoop.

How was this precious and beautiful piece of jewellery used? There are various theories. A nose ring? That’s possible, but its broad hoop would have blocked the nose, and besides, two examples found elsewhere in Scotland, at Sculptor’s Cave, Covesea and at St Andrews, have deliberately-blocked gaps. An earring? Again, a possibility, but the Covesea and St Andrews examples could not have been used in that way. Some kind of money? Money as we know it didn’t exist in the Bronze Age, and these objects are so rare that they are unlikely to have been used as currency, although they would certainly have been valued. The most plausible explanation is that they were worn in the hair, as decorative hair rings, as a way of showing off the wealth and status of their high-ranking owner. The wear seen on the inside of the hoop is consistent with this.

Only 26 of these hair rings have been found in Scotland (including two from St Andrews that might never have been coated in gold, and four that have probably lost their gold cover). Of these 26 only one other – a solid gold example from Ballaggan, Dumfries and Galloway – has the tiger stripes. Around 60 are known from England and Wales, while over 120 have been found in Ireland. Around 40 have been found on the near Continent, in northern France and the Low Countries, many coming from graves. This, then, was an international fashion accessory. The earliest examples date to between 1350 and 1100 BC, and the latest to around 900‒800 BC.

The ten hair rings found in Sculptor’s Cave, Covesea seem to be related to some of the human remains found there, especially those of children. The example from Cladh Hallan was found outside the entrance of a house. Cladh Hallan is famous not only for being the earliest example of ‘terraced housing’ in Britain, but also for the ‘mummies’ found under the floor of one of the houses. To find out more about this intriguing site, visit the Cladh Hallan research page at the University of Sheffield website. We are grateful to Professor Parker Pearson for allowing us to feature this wonderful object as we launch our AHRC Gold Research Network. 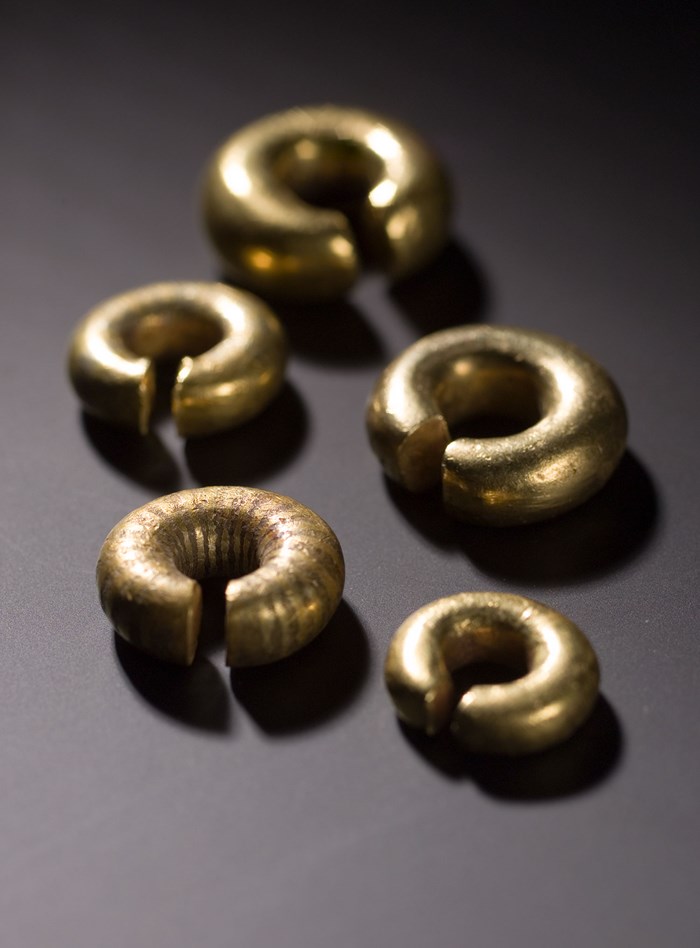