This week’s featured items are four Early Bronze Age gold foil discs that were found in 1858 when Mr Nicol Flett, proprietor of the farm at Huntiscarth in Orkney, dug into a prominent round barrow – one of the ‘Knowes of Trotty’. (‘Knowe’ is the word for a mound or hill.) The discs were found in a cist (stone box-like grave) under the centre of the mound, along with numerous amber ornaments and cremated human remains. Mr Flett left the human remains in the cist, and the gold and amber items were acquired by the (then-named) National Museum of Antiquities of Scotland in 1859. Re-excavation of the mound by Professor Jane Downes in 2005 recovered the cremated remains and discovered further tiny fragments of the gold discs, along with a few more amber items. The cremated remains were radiocarbon-dated to around 2030‒1770 BC. 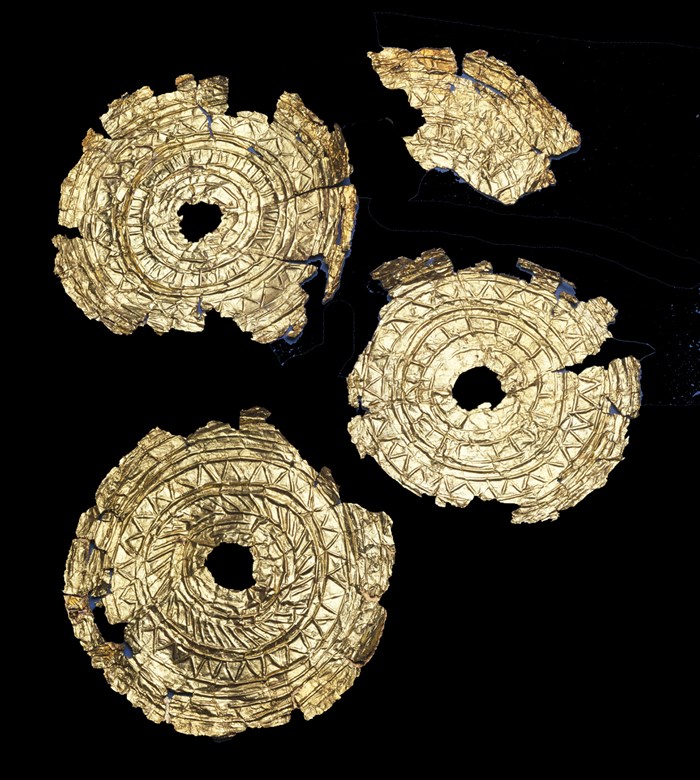 The discs are extremely thin – just 0.025 mm, similar to the thickness of industrial-grade aluminium foil – and the most complete disc is 76 mm in diameter, with a central hole around 10 mm in diameter. The discs are decorated with a geometric design, scribed from the underside and standing proud of the surface. It is clear from the creasing of the gold that the discs had not originally been flat, but instead mounted on a rigid, low-domed base that had probably been perforated on its underside. 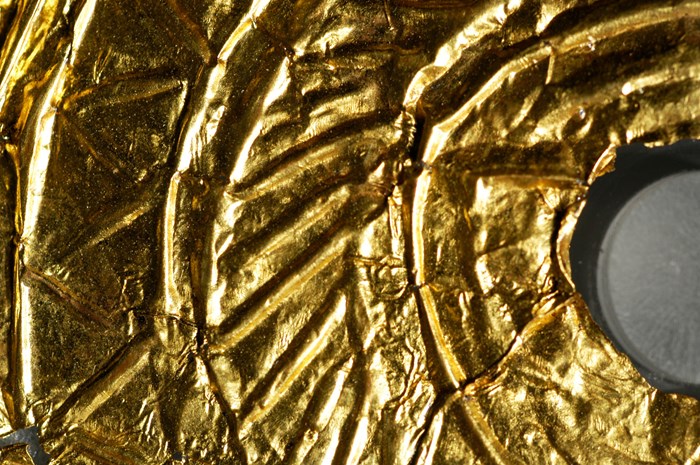 Detail of the most complete disc showing the scribed decoration and creasing of the gold. Photo by Barbara Armbruster.

Experimental reconstruction of the discs by talented Polish archaeo-goldsmith Wojciech Kochman in 2002 showed how a pea-shaped spherical piece of gold would have been flattened, first by hammering it on a flat stone anvil, then putting it between two sheets of animal hide to stretch the sheet into foil. It was then bent into the low domed shape by placing it over a wooden domed base and rubbing it with a piece of bone, working from the centre outwards. This process also burnished the gold. Any excess from the outer edge was trimmed off. Decorating the discs was achieved by laying them onto a concave layer of beeswax set into a rigid ‘cup’, then scribing the design with a narrow, blunt-ended bone tool before pouring boiling water to melt the wax and release the disc. 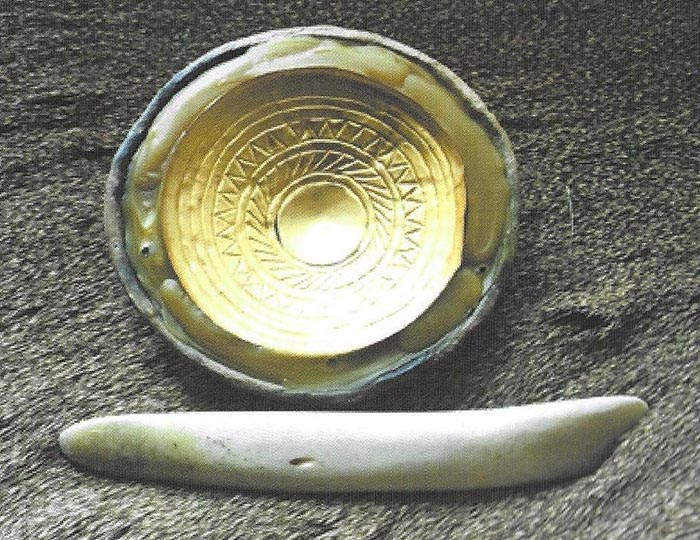 Replica disc in its bed of beeswax, together with the bone tool used to scribe the design. Photo by Wojciech Kochman.

Releasing the replica disc from its wax ‘bed’ by melting the wax with boiling water. Photo by Alison Sheridan. 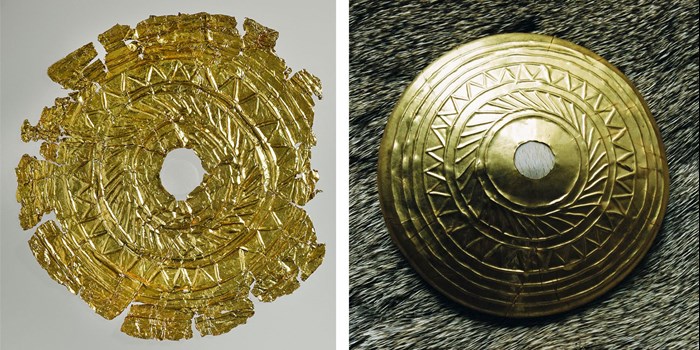 The most complete of the discs (left). The finished replica, on its domed wooden mount (right). Photo by Wojciech Kochman.

It’s likely that the discs, mounted on their bases, had been worn on a very special garment, perhaps a cape or gown. They seem too large to have functioned as buttons, so perhaps they had been sewn on (via a V-perforation in the base of the mount) as shiny and extremely precious ornaments. The prismatic and hook-shaped amber objects that were found with the discs may have been sewn onto the edge of the garment as a fringe, while the other amber items form part of an old and worn spacer-plate necklace that would have been worn around the neck. Even though it was not possible to identify whether the cremated bones are those of a man or a woman, it is likely that they had been a woman’s, since amber spacer-plate necklaces are associated with women. The amber necklace fragment and the putative regal cape or gown adorned with gold and amber must have been kept apart from the body during the cremation, as otherwise they would have perished in the pyre. 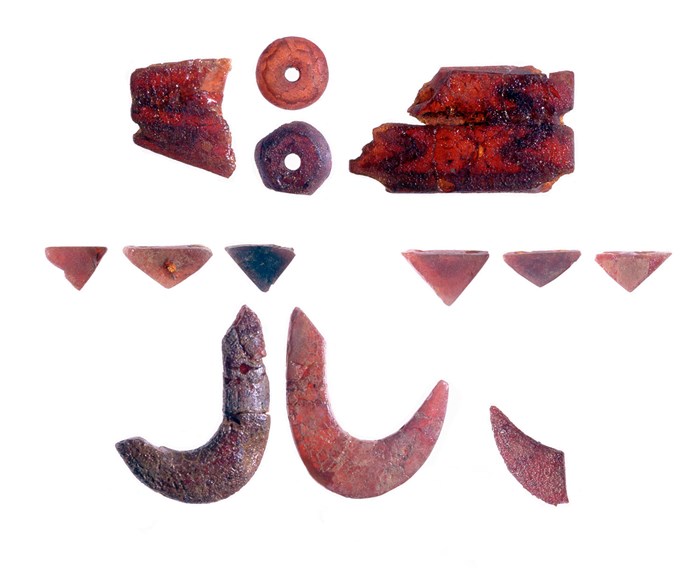 Some of the amber items found with the gold discs. Top: Plates and beads from a spacer-plate necklace. Bottom: Prismatic V-perforated beads and hook-shaped ornaments, whose lack of wear suggests that they had probably been sewn onto a garment. 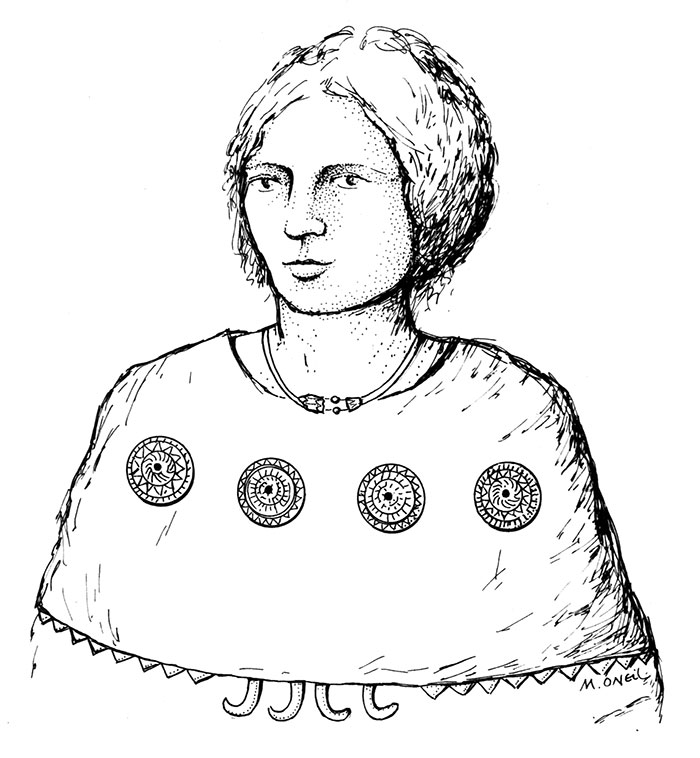 Artist’s reconstruction showing how the Knowes of Trotty gold discs and amber ornaments may have been worn. Illustration by Marion O’Neil.

The finds from the Knowes of Trotty are nationally important because they tell us about long-distance travel during the Early Bronze Age. The gold discs echo the even finer sheet goldwork that has been found in graves of that date in the area around Stonehenge in Wiltshire, southern England, and this is the only region where parallels for the prismatic, V-perforated amber beads have been found. It is also where several amber spacer-plate necklaces have been found; specialist amber-workers using imported amber were active in that part of England. No other amber spacer-plate necklace has been found in Scotland, and finds of such necklaces (or rather, parts thereof) are very rare in Britain outside Wessex.

The evidence suggests that the owner ‒ probably an aristocratic woman ‒ could have made an amazing 1800-kilometre round trip from Orkney to southern England, perhaps drawn by the fame of Stonehenge, and had come home with part of an old and worn amber necklace plus some fancy new amber ornaments. This isn’t as far-fetched as it may seem, since there are hints that, several centuries earlier, there had been links between Orkney and the area around Stonehenge.

The gold discs were made by a goldsmith less highly skilled than the ones active in the area around Stonehenge; might a local metalworker in Orkney have made them? We don’t know. As for the question of where the gold had originated, analysis has shown that it has a fairly high tin content. Further analysis would be needed to show whether or not it matches the tin-rich gold found in Cornwall…