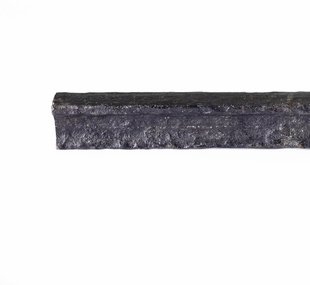 Length of Birkenshaw rail laid in 1815 at Killingsworth, one of a group of specimens illustrating the history and development of railway permanent way 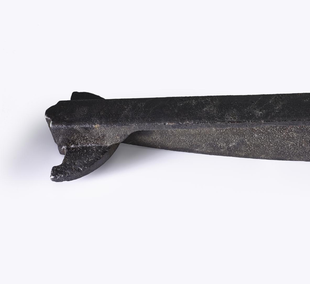 Short length of fish-bellied rail from the Halbeath Tram Way, constructed in 1780 to Inverkeithing and used for coal traffic, one of a collection of specimens illustrating the early history of railway permanent way in Scotland Length of cast iron fish-bellied rail from the Elgin Tram Way, constructed between Dunfermline and Charlestown, one of a collection of specimens illustrating the early history of railway permanent way in Scotland Arnold-Benz motor car with a single cylinder horizontal engine, built by Messrs Arnold of Paddock Wood, Kent, in 1897, the engine and other important parts probably made by Benz and Co., Mannheim 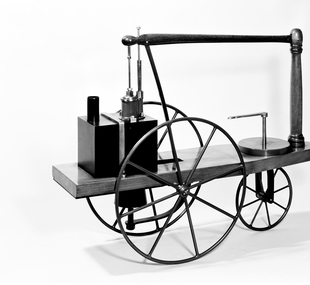 Model of Murdoch's Locomotive, with steering wheel in front and two driving wheels connected by a cranked axle behind, copy of the c. 1784 original by William Murdoch in Birmingham Art Gallery, made by Twining Models Ltd., Northampton, 1926 Model of an Atlantic type express passenger locomotive to a scale of 1 inch to 1 foot, the original built in 1907 by the North British Locomotive Co. Ltd, Glasgow One of two photographs of a 15 horsepower traction engine manufactured by Alex Chaplin and Co. in 1863, Chaplin's and Bray's patents combined - a threequarter view of the engine One of two photographs of a 15 horsepower traction engine manufactured by Alex Chaplin and Co. in 1863, Chaplin's and Bray's patents combined - a side view of the engine 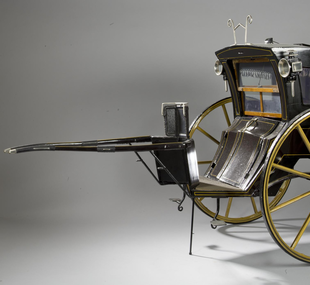 Model of a hansom cab painted dark mauve with yellow wheels, upholstered in purple velvet, to a scale of 3 inches to 1 foot, made by Charles Glasgow & Co., Paisley, around 1884