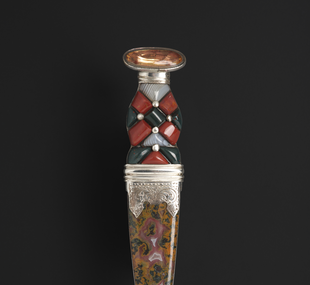 Silver dirk brooch set with bloodstone, jasper and agate, the moss agate on the sheath from Burn Anne, Ayrshire, with a registry mark for 16 July 1858 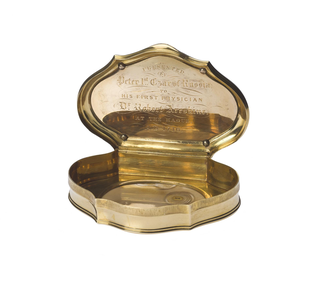 Gold D-shaped snuffbox with lid and base set with agates, the underside of the lid engraved "Presented by Peter 1st Czar of Russia to his first physician Dr Robert Areskine, The Hague, 1716" Piece of agate in a rough state, from Talnotrie 'The Union Brooch', gold set with Scotch pebbles, in the form of a garter set with two shields surmounted by a crown, by Peter MacGregor Westren, Edinburgh 1893 Inro or medicine case of gold lacquered wood, with four compartments, depicting the Seven Gods of Good Fortune in takamakie, and a nashiji interior, with an agate ojime: Japan, by Koma Kansai, 18th - 19th century Netsuke of agate, a boy reclining on a leaf, unsigned: Japan, 19th century Vase of agate, flat and straight-sided with ring handles, with four cranes and a lotus plant on one side and a spray of wild prunes on the other: China

Vase cover of agate, for a carved agate vase with ring handles: China Brush washer of quartz, carved in the form of a lotus leaf and flowers, with a frog perched at one end and a bird at the other: China, 19th century AD