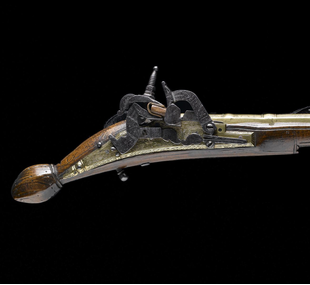 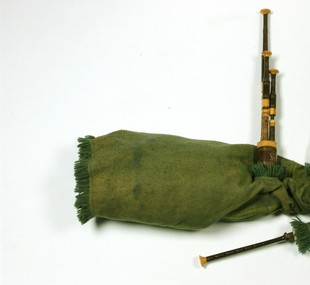 Miniature practice chanter made from fruitwood with a brass mount at the chanter top and a metal mount below the ivory sole, made by Alexander Glen, Edinburgh, 19th century Silver coffee-pot with a round stepped low foot beneath a tall, tapering body and a slightly domed, muffin-shaped cover with acorn finial, by Edward Lothian, Edinburgh, 1749 - 1750 Set of small pipes or chamber bagpipe of cocus wood or fruitwood, ivory mounted, with chanter and three drones in single stock, made by Donald MacDonald, Edinburgh, c. 1815 Bass and baritone drones from a set of Scottish small-pipes made of fruitwood and mounted with ivory, Scottish, late 18th or early 19th century Double chanter for a set of small-pipes or a practice chanter, made of fruitwood and mounted with an ivory sole and having fingerholes and thumbholes set in pairs and the wall of the chanter has been made in two pieces set flush together and strengthened with three metal bands, Scottish, early 19th century