Sporran of fur with animal head forming pocket flap and two claws forming tassels, part of a tartan suit originally made and worn for George IV's visit to Scotland in 1822 and taken to Australia by Donald Munro Ross when he emigrated in 1864, Scotland, early 19th century 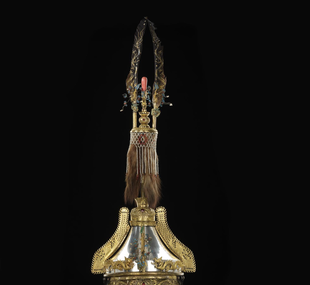 Model figure of a (possibly) Gwich'in man, made of carton-pierre, one of a collection illustrating national costumes of the Russian Empire for the Paris Exhibition, 1867: Russian, St Petersburg, by I.M. Heiser, c. 1867 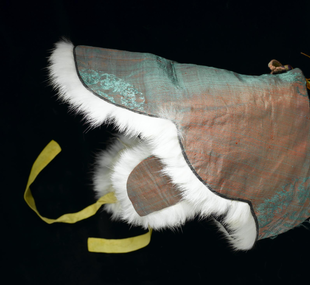 Hat with an open top and ear flaps, of slubbed red and green silk outside and dark green wool inside, trimmed with white fur with a yellow silk tie under chin, worn by Mrs Davidson Smith as a child and made by her Ama: Korea, 1920s