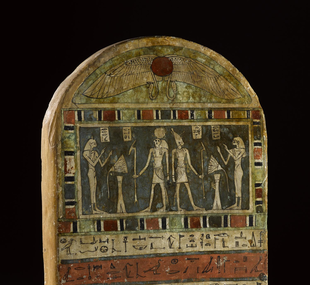 Stela of wood covered with gesso, round topped and painted showing the Lady of the House Shepset-ireru worshipping Re and Atum: Ancient Egyptian, Upper Egypt, Thebes, 26th Dynasty, Late Period Wooden stool with a semi-circular seat, hollowed above for comfort and cambered below: Ancient Egyptian, 18th - 19th Dynasty Figure of the arhat (disciple of the Buddha) Hattara Sonja of wood covered with gesso, painted and gilt, seated on base with his tiger crouching beside him: Japan, 1837 Figure of an arhat (disciple of the Buddha), of carved wood covered with gesso, painted and gilt, seated on a rectangular base, inscribed: Japan, 1837 Cabinet with twin doors, of wood overlaid with black lacquer decorated with lacquer designs in gold in Chinese style, on a stand of wood covered with gesso and gilt with legs and stretcher carved with leafy scrolls and flowers: English, c. 1670 - 1675 Statue of 'The Martyrdom of St Sebastian' in painted oak after a print by Master ES: German, the Lower Rhine Region, a follower of Arnt von Kalkar, c. 1480 - 1490, with later repainting and arrows Panel of carved wood with gesso and traces of pigment, representing the Adoration of the Magi in high relief: South German, Swabia, probably Ulm, c. 1520 Reliquary bust of a bishop in mitre, alb and cope, with cavity for a relic in his chest, of carved wood with painted and gilt gesso: South German, 16th century Figure of the Virgin and Child (Madonna and Child) in carved poplar wood with gesso and bearing traces of pigment and gilding: Italian, Umbria, by the Master of the Gualino St Catherine (Santa Caterina Gualino), 1315 - 1345 Figure of the Virgin kneeling, in carved oak with traces of polychromy on gesso, probably originally part of a nativity group: Netherlandish, c. 1500 Figure group of the Virgin and Child on a crescent moon, in carved oak with traces of polychromy on gesso: Netherlandish, possibly Brabant, late 15th century