Fragments of gold threads found in a grave in the choir of St Magnus Cathedral, Kirkwall, Orkney, probably 13th century Coronation ampulla of gold which held the sacred anointing oil for the coronation of Charles I at Holyroodhouse on 18 June 1633, possibly made by James Denniestoun, deacon Regimental dirk with a knife and fork, with an inscription on one side and a trophy of arms, a thistle and other plant motifs on the other Gold necklace of fourteen large oval beads of filigree work divided by smaller circular beads, late 16th century, long preserved by the Clerks of Penicuik as a relic of Mary, Queen of Scots Oval locket of gold and a gold and pearl pendant which was probably formerly attached to the locket, Scottish, late 16th century, preserved by the Clerks of Penicuik as a relic of Mary, Queen of Scots 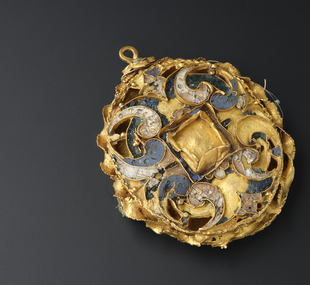 Gold locket with enamel cloisonne scrolls which once contained a miniature, c. 1600, found in Barnhills Field, near Corsewall Castle, Wigtownshire 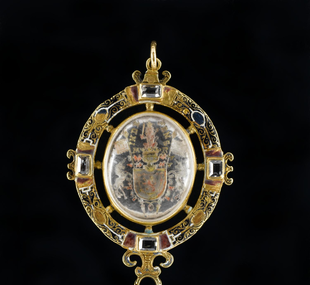 Neck slide with hair inserted in a square, with a gold border on which is a crown and the letters "J.R.", and round it "GOD SAVE THE KING" , probably post 1715 Locket consisting of an oval gold frame with a loop at the top containing a miniature of Prince Charles Edward Stuart, with four pieces of his hair gummed on the back Heart-shaped brooch with gold fittings, a silver border set with 13 diamonds, and a glass centre said to contain the hair of Prince Charles Edward Stuart given by him to Lady Mary Clark, 18th century Gold ring brooch set with multi-coloured moss agates, with three gold thistles in the centre with heads of amethysts and a cairngorm Spray brooch of three enamelled gold flowers on a gold stem, with one green enamelled gold leaf with a blue back, known as a "trembler" jewel, c. 1650 Gold bracelet set with agate and other native stones, the pendant heart with a window for a hair ornament on the reverse, c. 1858