Cas chrom or foot plough, the shaft heel and sole bound to nest by three iron bands, it is tipped with a new blade and the shaft lies back at approximately 25 degrees from the vertical, there are remains of a wooden foot peg in hell on right side Rustal or ristle plough, comprising a wooden beam tipped at the front with a metal band for attachment to a single horse, a single stilt is secured to the beam by an iron band and wooden cross-tie and an iron coulter like blade drops downwards and is secured by wooden wedges Corroded iron blade from a dirk or dagger, from a crannog in Eadarloch, Loch Treig, Inverness-shire 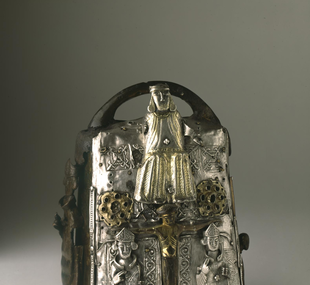 Guthrie bell and bell shrine, bearing representations of God and the Crucifixion and an inscription in Latin, from Guthrie Castle, Forfarshire, 12th century Highland dirk with a broadbacked blade and a wooden hilt, second half of the 17th century Iron dagger with a handle of bone and brass, and a broken blade, from Cromdale Iron dagger with a heather root hilt, from Millrig Moss, Lanarkshire, about 1880 Iron pike head, fitted to a modern wooden shaft, triangular in cross-section with two lugs for attachment to the shaft