Reflector with facetted mirror parabolic reflecting surface, for use with an oil lamp in lighthouse illumination 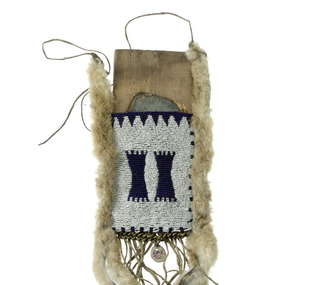 Hand mirror, shield-shaped with a screw-on ebony baluster-shaped handle with carved ivory terminal, from the nécessaire de voyage or travelling service assembled by Martin-Guillaume Biennais for Napoleon's sister, the Princess Pauline Borghese, possibly at the time of her marriage to Prince Camillo Borghese in 1803: French, Paris, c. 1800 - 1804, bequeathed to Alexander, 10th Duke of Hamilton, in 1825 Embroidered bodice panel (jig) from the front of a woman's dress (pask, pashk), T-shaped with a multicoloured geometric pattern and two cords comprised of threads loosely twisted, with tassels bound in metal thread, at the top of the opening, with a green border: Asia, South Asia, Iran or Pakistan, Baluch or Brahui or Mengal, early - mid 20th century