One of a group of orders, medals and badges awarded to Sir Alexander Fleming, discoverer of penicillin, Lapel Bouton, Order of Honour and Merit, Cuban Red Cross Slide rule (ordinary form) in brown leather case, part of a collection of geometrical models and surveying and mathematical instruments, used to calculate the weight of a cubic foot of a variety of metals, wood, cement and pure water and the ultimate strength in lbs, maker unknown, late 19th - e. 20th Century One of a group of specimens of telephone apparatus - a table pattern telephone suitable for use on central battery systems, 1910 - 1930 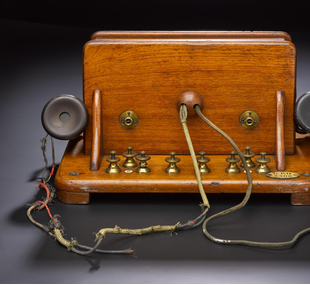 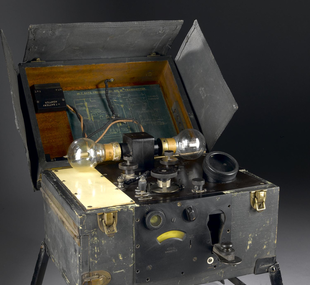 Electric telephone set consisting of an electric bell, microphone, bell push, earpiece and switch hook mounted on a wooden base 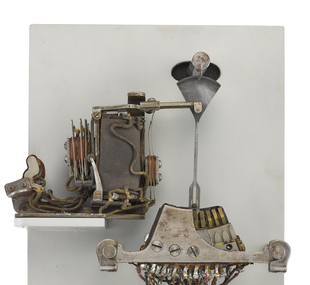 Hughes teleprinting apparatus, G.P.O. No. 85, consisting of combined transmitting and receiving apparatus mounted upon a mahogany board Sectioned piece of the concentric trunk telephone cable, made by Standard Telephone and Cables, laid between London and Oban for T.A.T.1, mounted vertically in a glass tube on a wooden base, 1955 Hand telephone set, c. 1900, with the handset on a cradle above the instrument which rests on the magnets of the magneto generator, and designed for table mounting Solar UV spectrometer, prototype instrument for the experiment on the NASA Orbiting Solar Observatory, made by the Mullard Space Science Laboratory in Surrey, 1969