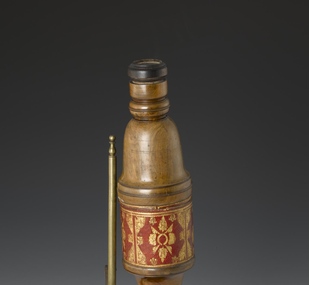 Scent bottle case of walnut split along its length, and hinged, both parts lined with red silk and mounted in gilt metal, made to contain three octagonal straight-sided glass bottles with stoppers and a gilt metal funnel, part of the Ida Pappenheim Collection: French, 1838 - 1900 Replica set of Naperian Rods, twice the original size, consisting of ten boxwood rods and a walnut slip case with a sliding lid, made by David Secret, Suffolk, for Harriet Wynter Ltd, London, 1991 Group representing the Virgin, Child, St Anne or one of the midwives mentioned in the Apochrypha, St Joseph and angels in the stable at Bethlehem, in carved walnut with traces of painting and gilding, part of a larger altarpiece: South Netherlandish, about 1470 Fall-front bureau with four legs, of walnut and sycamore, part of the Cumbrae range designed by Neil Morris and manufactured by Morris of Glasgow, 1949 Table constucted from slabs of veneered timber on a plinth with an indented tiger's-eye stone top, the form of the table describes an S shape with a central vertical slab running through it: British, London, designed by Scottish modernist architect Thomas Smith Tait for his London House, 1925 - 1930 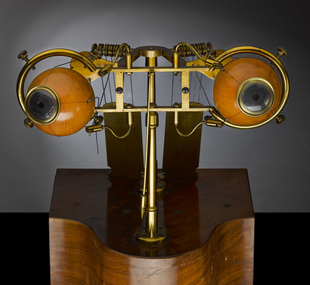 Reute ophthalmotrope, model of the movements of the eyes in response to muscles, brass and wood, used at the Royal (Dick) School of Veterinary Studies, University of Edinburgh, maker unknown, late 19th century