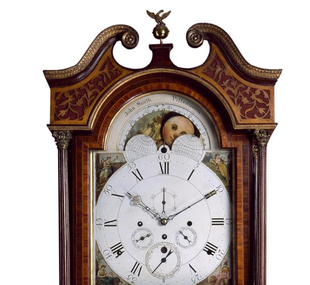 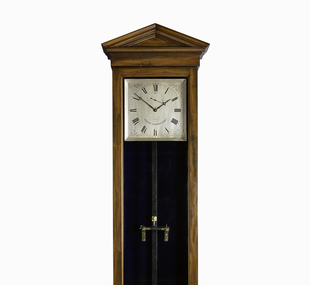 Bain electric clock number 102 made by Alexander Bain for the Electric Telegraph Co., in a mahogany wall case 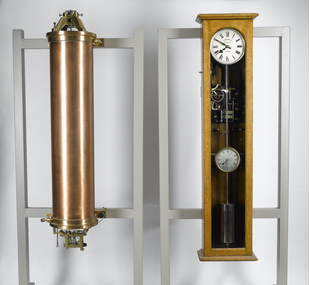 Free pendulum from the Shortt No. 0 prototype free pendulum regulator clock, hung in copper cylinder with glass bell covers top and bottom, and battery box, operated at the Royal Observatory, Edinburgh from 1922, designed by William Hamilton Shortt in 1921, made by the Synchronome Company of London, 1922 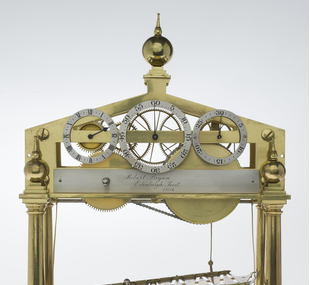 Table clock of gilt brass engraved with coats-of-arms and arabesques on sides, under part of case perforated and supported on four satyrs and central stem, with base resting on four later sea-horses, by Bartholomew Newsum, London, late 16th century Three-face skeleton clock in a glazed case, by James Clark, Edinburgh, 1828, made for Cape Wrath Lighthouse Control clock for lighting and extinguishing an unattended gas beacon by clockwork, by James Ritchie and Son, Edinburgh Commemorative clock set in a propeller hub presented to Sergeant Major A. Hinton, made by J. Ritchie and Son, Edinburgh, 1918 - 1919 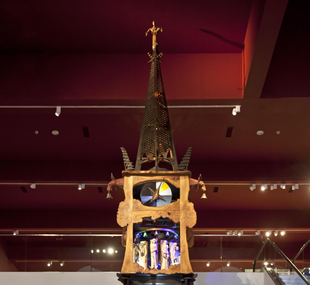 The Millennium Clock Tower, echoing the form of a medieval cathedral, constructed in four sections, the Crypt, the Nave, the Belfry and the Spire, and within, containing fragments of the past millennium - its tragedies and hopes, by the Millennium Clockmakers' Trust under Eduard Bersudsky, Tim Stead, Annica Sandström and Jürgen Tübbecke, Scotland, 1999