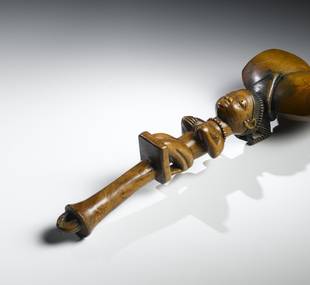 Ceremonial dance wand, of carved wood in the form of a kneeling woman wearing a neckband of glass beads, surmounted by the double-axe symbol of Sango, the Yoruba god of thunder, which is carried by the priest of the Sango cult: Africa, West Africa, Nigeria, Ilorin, Yoruba people, late 19th to early 20th century