Clarsach or Highland harp said to have been given by Mary, Queen of Scots, to Beatrix Gardyne of Banchory while on a hunting trip in Atholl, c. 1563, made in the West Highland region, c. 1450. Harp case for the Lamont Harp, elaborately carved, made by Whytock and Reid of Edinburgh Harp with triangular body of wood and eight arms of twig lashed together, eight strings of root tendril, and a wooden image which stands on the body: Southern Nigeria, East Central State, Igbo people 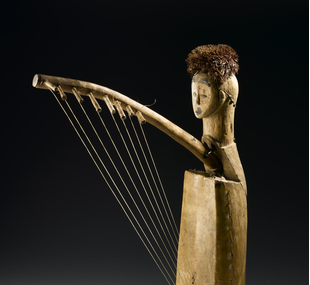