Architect's model, in five parts, of an 18th century house of dark brown varnished oak, said to be Valleyfield House Wooden model tank, made by a German prisoner for Corporal A.L. Sneddon, Cameronians, World War I 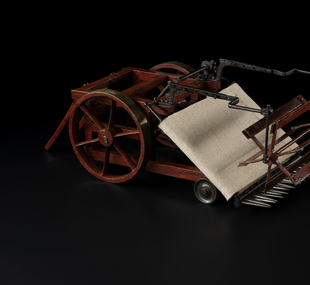 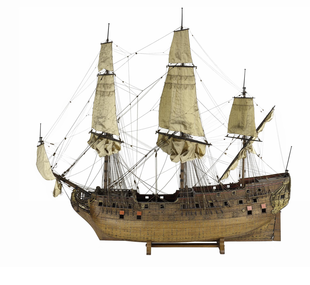 D'Bataviase Eeuw (The Batavian Century), model (scale 1:27) of a Dutch East Indiaman merchant ship, probably made to celebrate the centenary of Batavia (Jakarta) founded by the Dutch East India Company (Vereenigde Oost-Indische Compagnie) in 1619, model made about 1719 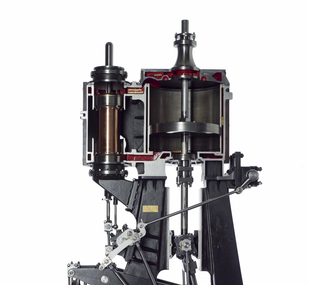 Sectional models of the engines of SS. 'Zealandia' and 'Australia', to a scale of 1 1/2 inches to 1 foot, made in the Museum workshop from drawings given by Messrs Elder and Co., Glasgow, 1898 Contemporary wooden model of the Earl of Rosse's reflecting telescope with a three foot diameter speculum, showing the method of mounting it, made at Birr Castle, Ireland, c. 1840 Working model of an orrery according to Copernicus, showing the planets with their satellites revolving round the sun, the whole being enclosed in a glass globe, by Sendtner, Munich, 1913 Working model of a tower clock fitted with Lord Grimthorpe's escapement and striking the hours and Westminster quarters on five tubular bells, to a scale of 6 inches to 1 foot, by James Ritchie and Son, Edinburgh Model of a single furnace marine boiler with return tubes Model of a marine engine with two horizontal cylinders and modified Stephenson valve gear, built by Messrs Humphreys and Tennant of Deptford, London, to a scale of 1:12 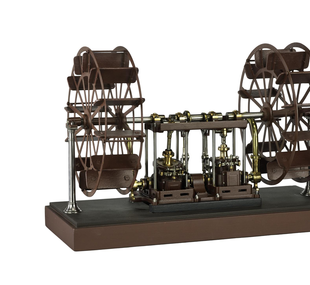