Stele, of a type also referred to as a Cippus of Horus, of mottled grey stone carved with figures in raised relief on the face and columns of hieroglyphs in sunk relief on the back, top and sides, acquired by the Scots explorer James Bruce about 1771 : Ancient Egyptian, allegedly found in Aksum in Ethiopia but originally from Egypt, Ptolemaic Period, 2nd or 1st century BC 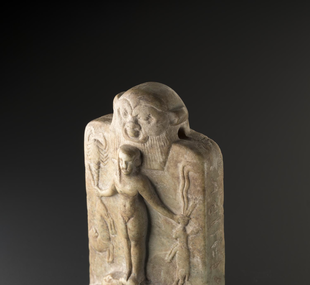 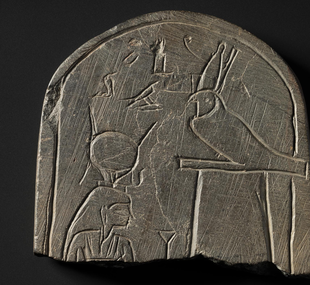 Silstone stela fragment, upper portion only, incised on one side with Isis before a shrine and on the other with the owners, a man named Paenmehyt and a woman named Tanetmennefer, with their arms raised in adoration: Ancient Egyptian, Upper Egypt, Hierakonpolis, Temple area at Kom el-Ahmar, late New Kingdom, c. 1230 - 1069 BC Round-topped limestone stela dedicated to the priest of Horus, Hornakht, and his wife Ahmose, by their son, lunette with shen-sign between two wadjet eyes above offering scene in shallow raised relief, with an inscription in sunk relief below, surface partly eroded by moisture: Ancient Egyptian, Upper Egypt, Hierakonpolis, New Kingdom, 18th Dynasty, c. 1550 - 1292 BC Votive stele in grey limestone, carved with Guanyin (Goddess of Mercy) flanked by attendant bodhisattvas, all standing on lotus pedestals supported on a rectangular plinth, made as a temple gift, in Tang style: China, probably 20th century Stele portion of limestone, carved with cameo busts of a man or youth and two women in very high relief: Coptic, probably 5th century BC