Colour photo of an Ocean Sunfish washed up on the beach at Rosemarkie near Inverness.

On 23 September 2020 a strange fish washed up on the Black Isle near Inverness. Weighing more than 160kg and measuring 1.7 metres tall it was the peculiar ocean sunfish. Rarely seen off the coast of the United Kingdom, this specimen provided the opportunity to investigate further.

Why are they called sunfish?

Sunfish get their name because they are often seen sunbathing at the surface of the sea.

How many eggs do they spawn?

They produce up to 847 million eggs each time they spawn and the fry when they hatch out are only 2.5mm long, but they grow very quickly.

Some of the internal organs found are in unusual places. For example, their kidneys are found up behind their head.

Where do they live?

Why do they have large eyes?

They have very large eyes (about the size of an orange) which they need to see in the darkness of the deep ocean.

A fish from warmer waters

There are five species of sunfish found in tropical and temperate oceans. They include the world’s largest bony fish. The largest ocean sunfishes ever recorded were 4.3m tall and 3.3m long. The heaviest weighed more than 2.3 tonnes!

It's unusual for ocean sunfish to turn up in the North Sea. They normally live in warmer waters of open oceans where they can dive down to more than 800m searching for food. Normally found in open water, ocean sunfish don't do very well in shallow seas and they often end up stranded on the seashore, just like the Rosemarkie sunfish. 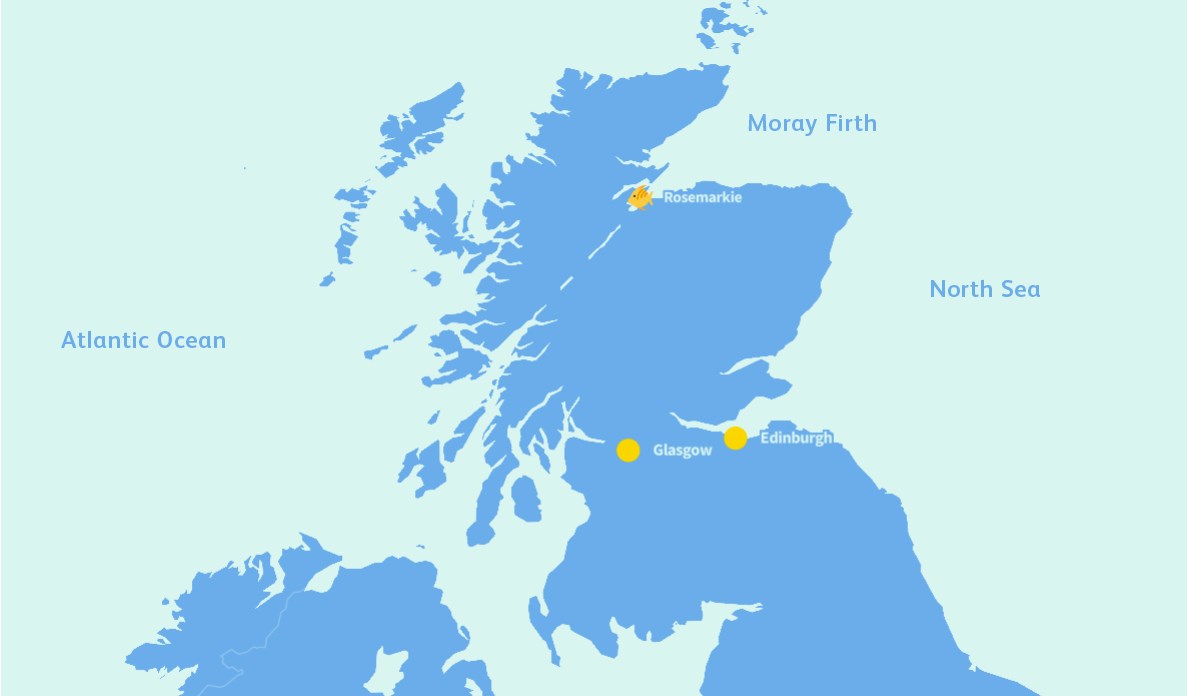 Map of Scotland showing Rosemarkie where the sunfish was found.

Andrew Kitchener, our Principal Curator of Vertebrate Biology, talks about the discovery of the Rosemarkie Ocean Sunfish and the findings from the autopsy

Please note: this film contains some graphic images and brief footage of a sunfish dissection. Viewer discretion is advised.

A fish that sunbathes

Sunfishes get their name because they are often seen sunbathing at the surface of the sea which is thought to help them warm up after a long deep dive in cold waters. But it may also attract sea birds and fishes which pick off their irritating parasites. 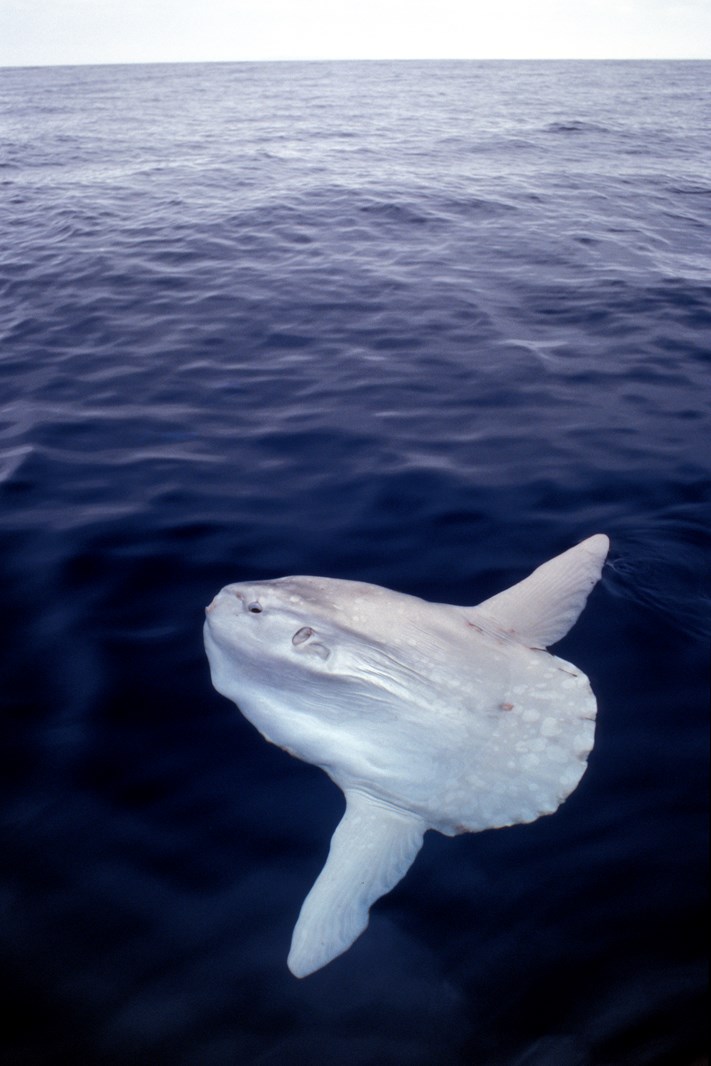 An ocean sunfish sunbathing at the surface of the water © Mike Johnson / earthwindow.com

Their scientific name is Mola mola. 'Mola' means millstone in Latin, reflecting their roundish shape. Their body shape is probably linked to the peculiar way they swim by wagging their dorsal and ventral fins from side to side.

Ocean sunfish feed mainly on jellyfish and other jelly like animals. They can also feed on small fishes, crustaceans and other invertebrates, especially when they are young. 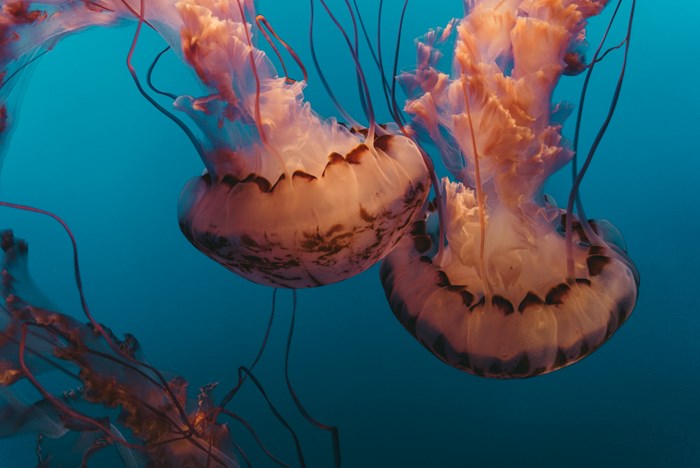 They produce up to 847 million eggs each time they spawn and the fry when they hatch out are only 2.5mm long, but they grow very quickly. Ocean sunfish live for about 20 years. From its size, we know that the Rosemarkie sunfish was about four years old.

An ocean sunfish and a scuba diver © Mike Johnson / earthwindow.com

The Rosemarkie sunfish has given us a rare opportunity to look at the internal anatomy of this strange fish. It has a very large eye, about the size of an orange. They swim in the open ocean and can dive down to more that 800m in order to search for food. They need large eyes in order to see in the darkness of the deep ocean. 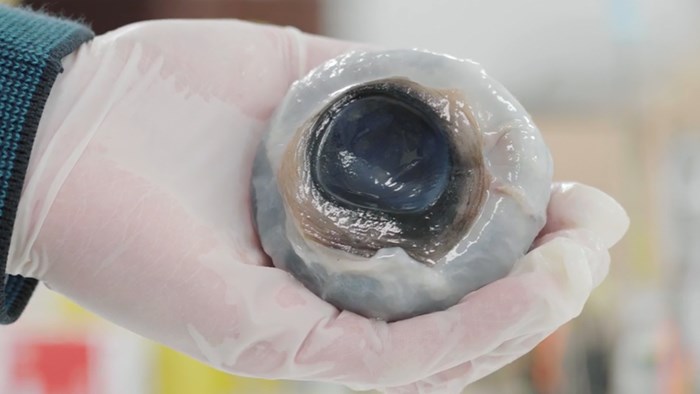 Eye from the Rosemarkie Ocean Sunfish during the autopsy

While its skin appears to be quite rigid, it's very thin. Underneath, there is a white capsule that is quite stiff and it acts as an external skeleton. Although the sunfish has a skeleton like other fishes, it needs this external skeleton for its swimming muscles to pull against in order to waggle its fins from side to side when it's swimming. 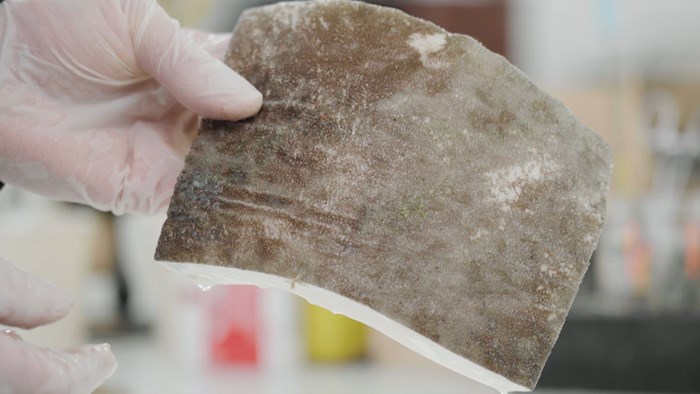 Section of skin from the Rosemarkie sunfish

Ocean sunfish have small mouths lined with tiny sharp teeth behind a sharp beak, which they use to grab and eat jellyfish. The intestines of the Rosemarkie sunfish were about 6m long!

Because of their unusual shape, some of their internal organs are in unexpected places. For example, their kidneys are found just up behind the head. Unlike other fishes which have a swim bladder that they can use to adjust their buoyancy, sunfish (like sharks and rays) use their oily liver and the capsule which makes them neutrally buoyant. 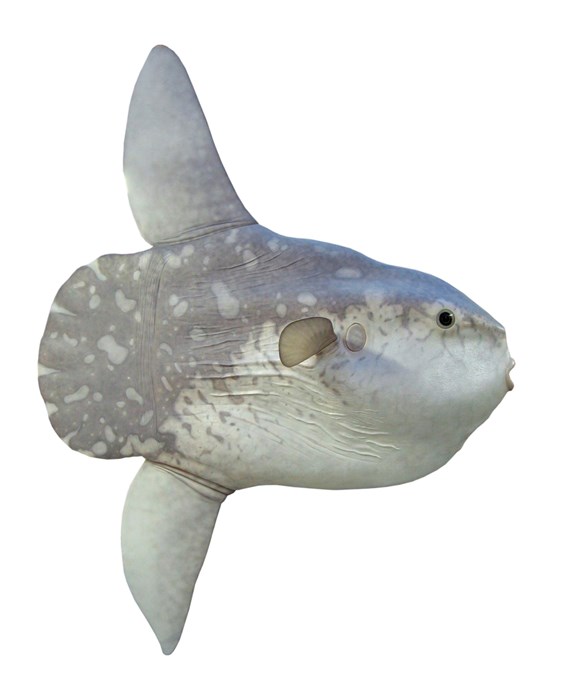 Ocean sunfish model at the National Museum of Scotland.

Although it's a bony fish, the ocean sunfish is mainly made up of cartilage, which is the same material that our noses and ears are made of. Cartilage is a light material that helps keep the fish buoyant, just like the skeletons of sharks and rays.