This strange-looking device was the first model of telephone to go on sale. But can its creator, Alexander Graham Bell, truly lay claim to the title ‘inventor of the telephone’?

Alexander Graham Bell originally suggested that phone calls should be answered with a cheerful ‘ahoy-hoy!’. Rival Thomas Edison’s preferred greeting ‘hello’ has won out in the long run, however.

Who was Alexander Graham Bell?

Alexander Bell was born in Edinburgh on 3 March 1847. At the age of eleven he chose to add the middle name of Graham, which stuck for the rest of his life. 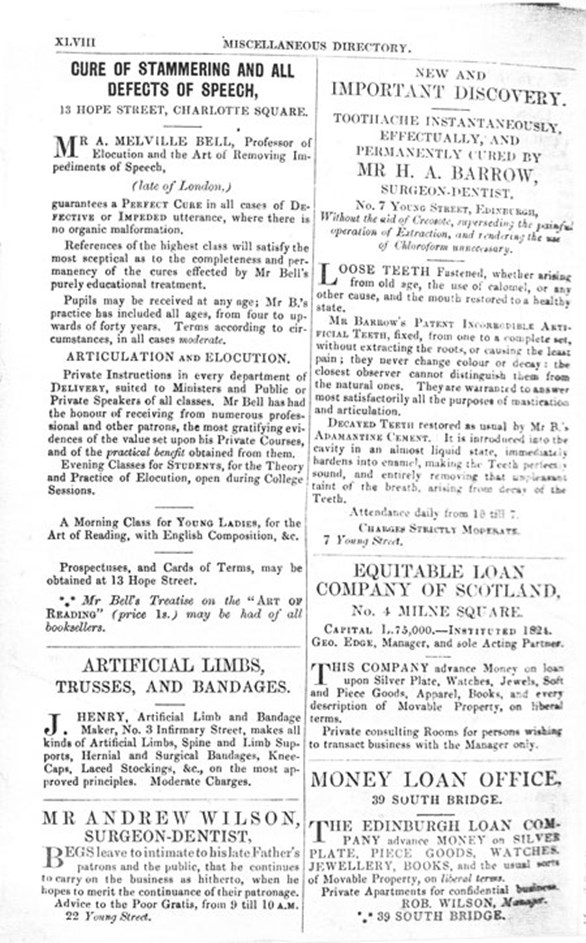 Above: Listing for Bell’s father from the Edinburgh Post Office Directory 1848-9.

His father’s work focused on developing a system of ‘visible speech’, which allowed speech sounds to be written down. He aimed to use this visualisation as a means of teaching deaf people to speak, without them ever having heard words spoken. Encouraged by his father, young Bell attempted to make working models of ear and vocal cords, aiming to create a mechanical speech device. He attended classes in anatomy and physiology in London for a couple of years, building his understanding of how speech and hearing worked.

Following the death of both of Bell’s brothers from tuberculosis, in 1870 the family emigrated to a healthier life in Canada. Building on his father’s earlier work on the human voice, Bell started teaching deaf students in Boston, moving to the United States in 1871. Two years later, he was appointed Professor of Vocal Physiology and Elocution at Boston University.

These early experiments in speech creation, along with his knowledge of anatomy, informed his own experiments on transmitting speech, which he began in earnest from 1873. 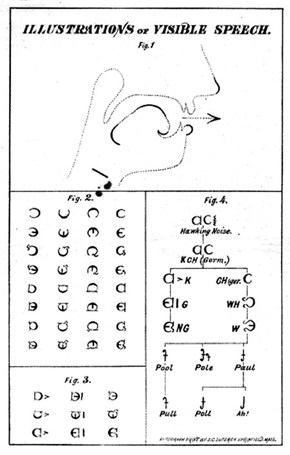 Above: Visible Speech, a kind of alphabet that reduces all sounds made by the human voice into a series of symbols, developed by Bell’s father, Alexander Melville Bell in 1864. Retrieved from the Library of Congress.

Above: Teaching model of the human tongue, larynx and vocal chords, made of papier mâché by Dr Louis Thomas Jérome Auzoux in France, c.1860. This type of dismantleable model was used to teach anatomy students the complexities of human vocal physiognomy. You can see the model in the Communicate gallery at the National Museum of Scotland.

The patent for the telephone

Alexander Graham Bell did not think he was inventing a ‘telephone’ during his early experiments. He was working on the holy grail of the day: sending multiple telegraph messages over the same wire. He aimed to make electro-mechanical devices capable of transmitting and receiving different tones for each message. Through study and experimentation, Bell hypothesised that if sound waves could be converted into a fluctuating electric current, that current could then be reconverted into sound waves identical to the original at the other end of the circuit.

He was supported financially in this work by Gardiner Hubbard, a wealthy lawyer and politician, whose deaf daughter, Mabel, had been taught to lip-read and speak by Bell. Bell fell in love with Mabel. Her father, being aware of Bell’s experiments with possible ‘speaking telegraph’ devices, refused his permission for the couple to marry until Bell had successfully developed his new invention. To speed matters along, he also funded an assistant, Thomas Watson.

Sensing the danger of rival developments for this valuable invention, Bell’s future father-in-law filed an application for ‘Improvements in Telegraphy’ on 14 February 1876. On that very same day a few hours later – or was it actually a few hours earlier? – inventor Elisha Gray filed his own idea for a telephone device at the same office. Bell was granted the patent on 7 March 1876.

Just three days later, on 10 March 1876, his first intelligible telephone communication was made. Bell was in his laboratory with this latest experimental version of a telephone transmitter. In Bell’s bedroom, Watson waited with a reed receiver pressed against his ear. Two days later, Bell described what happened in his laboratory notebook:

“
I then shouted into M [the mouthpiece] the following sentence: ‘Mr Watson – Come here – I want to see you.’ To my delight he came and declared that he had heard and understood what I said.
- Alexander Graham Bell, 1876

Controversy remains as to whether Bell or his father-in-law might have had access to the details of Gray’s patent through a patent office clerk in Hubbard’s pay. The clerk seemed to admit as much in a later court case, but Bell’s patent was upheld, as it was in the many cases which followed. 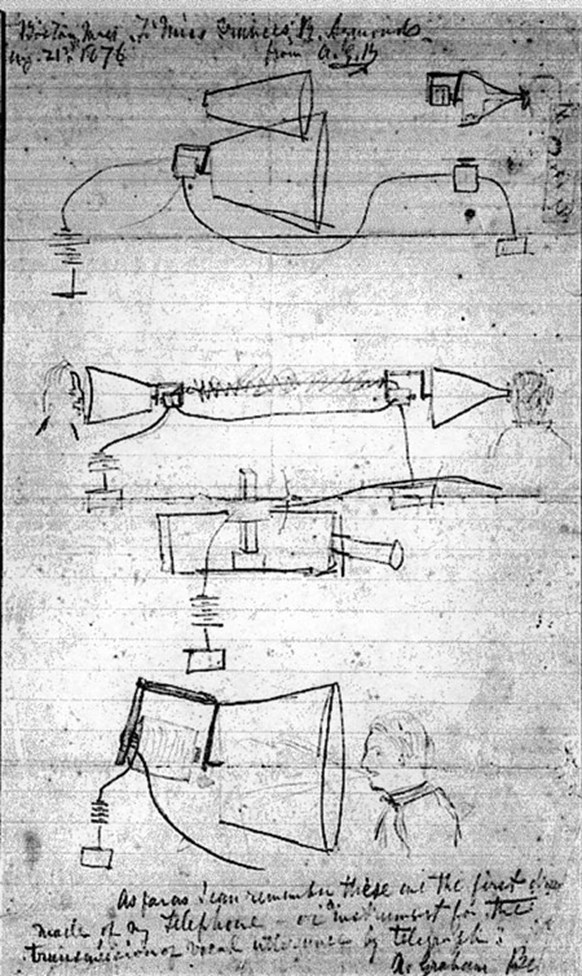 Above: Bell’s drawing of the telephone, 1876. Retrieved from the Library of Congress.

On 11 August 1877, Bell and Mabel arrived in Britain from the USA on honeymoon. In Bell’s luggage was his new communication device, the telephone. Bell travelled the country promoting his invention, even demonstrating the device to Queen Victoria, who was so amused she asked to keep the temporary installation in place. The first telephones – called box telephones because of their shape – went on sale later that year. 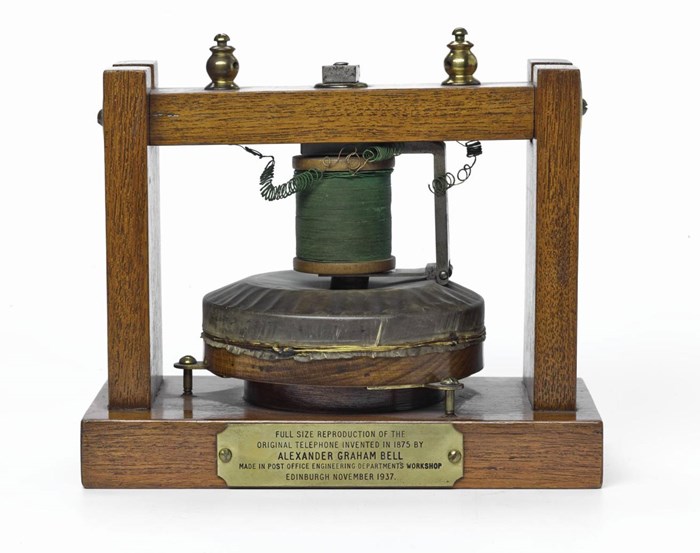 Above: Replica of Bell’s ‘gallows frame’ telephone, on display in the Communicate gallery. It was on this type of device that Alexander Graham Bell first transmitted sounds, though still not recognisable speech, in the summer of 1875. Replica, GPO Engineers’ Department, Britain, 1937. 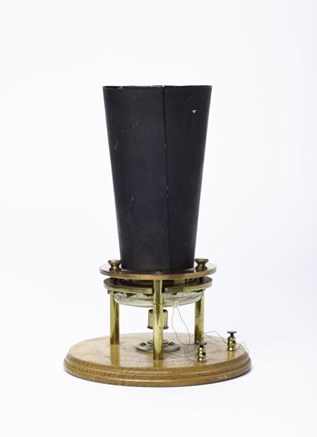 Above: Bell’s ‘liquid transmitter’, on display in the Communicate gallery. A replica of Alexander Graham Bell’s experimental telephone of 1876, similar in shape to the human larynx and vocal chords. Made in Britain, 1976. 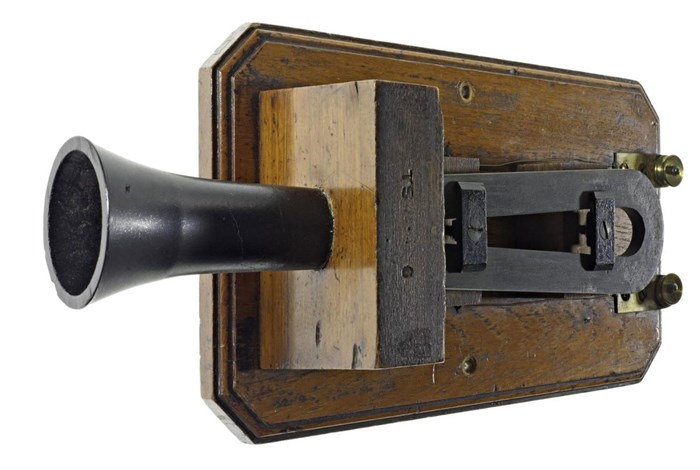 Above: Bell’s box telephone, on display in the Communicate gallery. Alexander Graham Bell demonstrated this type of phone when he visited Britain in 1877-78. Known as ‘Bell’s box telephone’, it was the very first type of telephone to go on sale. 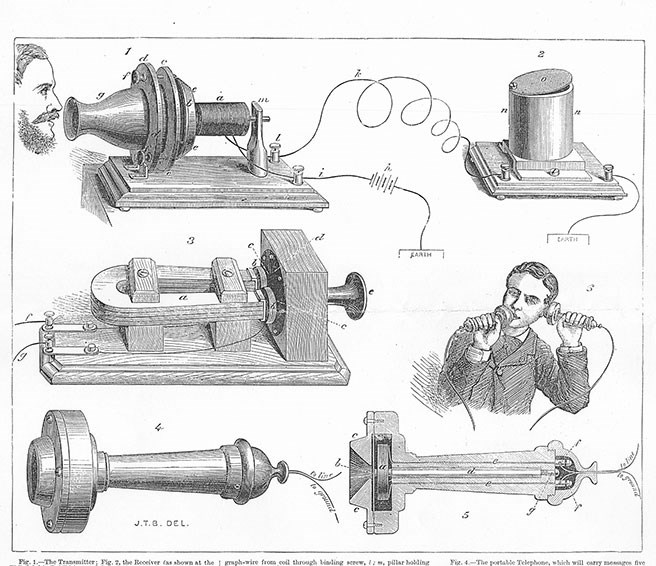 Above: Illustration of the equipment demonstrated by Bell in London in December 1877. The Illustrated London News Dec 15 1877. 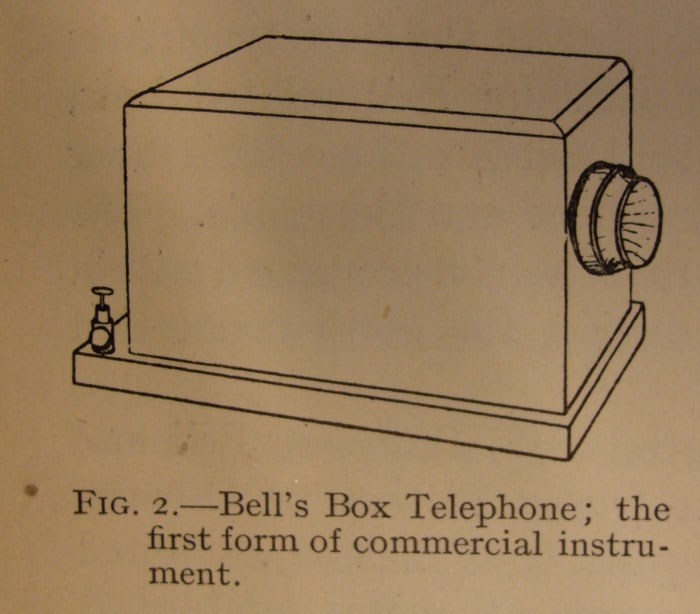 Above: Illustration of Bell’s box telephone with lid. Mounted to a wall or table, it had only one transmitter/receiver. 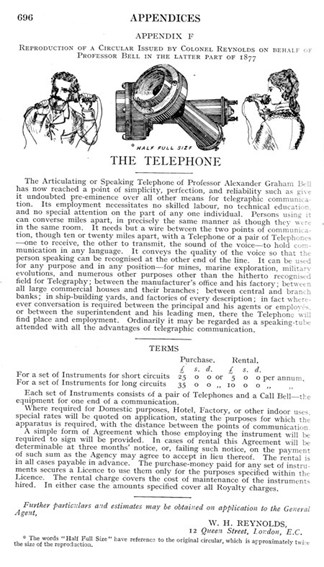 Above: British advertisement for a set of telephone instruments, 1877.

Sometimes described as the most valuable patent ever filed, for years following the award, Alexander Graham Bell had to defend his patent in expensive and protracted litigation battles brought by a whole range of inventors. In 2002, the US Congress formally recognised Italian Antonio Meucci as the true inventor of the telephone, based on prototypes he demonstrated in 1860. Bell and the Italian had shared a workshop in the 1870s. Meucci was pursuing his claim in the Supreme Court when he died in 1889. France and Germany cite their own contenders for the title.

In many respects, Bell’s telephone was flawed, his receiver and transmitter designs being considerably improved by others within a couple of years. Among those were Thomas Edison and Professor David Hughes, who both produced improvements to Bell’s early instrument, transforming the telephone into a truly successful communication device. 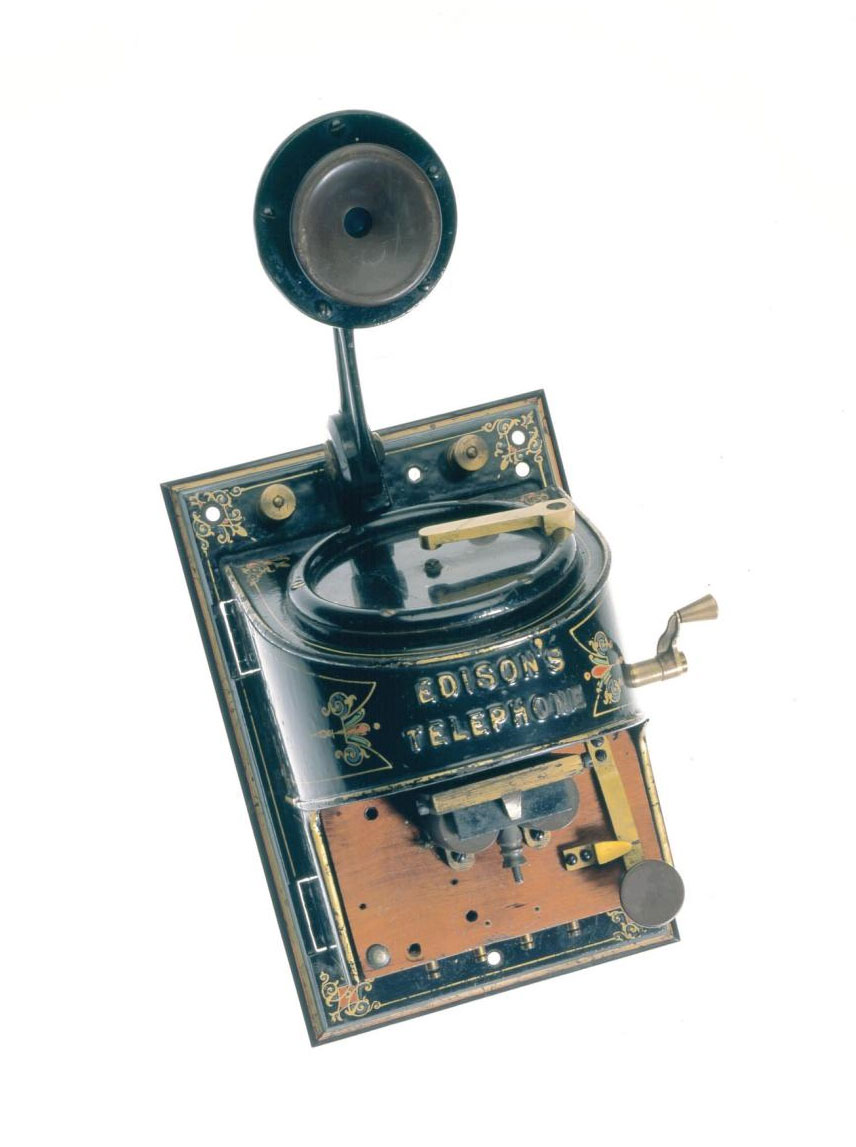 Above: Edison loud speaking telephone, on display in the Communicate gallery. The round transparent disc is a loud speaking receiver which meant everyone could listen in to the conversation. Edison Telephone, USA, 1879.

Welsh engineer and Professor of music David Hughes was a pioneer in microphone technology, which hugely improved Bell’s first devices from 1878. Rather than patent his improvement, he published the details, making them available to all. His later work on radio waves enabled early experiments with wireless communication in the 1880s. 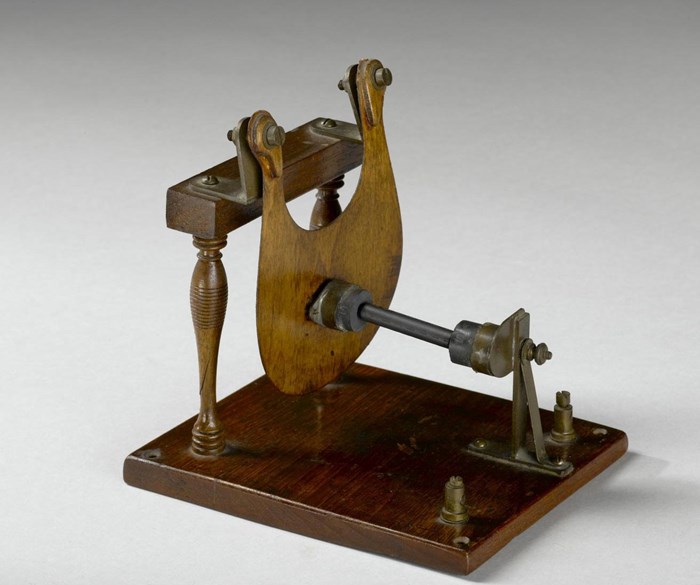 Above: Experimental microphone with carbon pencil, on display in the Communicate gallery. Made by Prof David E Hughes, London, c.1879.

Still widely known as ‘the inventor of the telephone’, Bell had given up his interest in this invention by his early thirties. He spent the rest of his life with Mabel and their family in Canada, working on a series of varied projects including flight, sheep breeding, developing a ‘vacuum jacket’ to aid artificial breathing and the founding of the National Geographic magazine.

The project which  Bell himself called his greatest achievement in 1880 he named the ‘photophone’. This was a method of transmitting sound in a beam of light using a light-sensitive selenium cell to translate the light density into electric signals. He succeeded in sending sounds via light over a few hundred metres. The photophone concept was trialled during World War I much closer to home when engineers from University College London and the Admiralty tested the idea across the Firth of Forth as a way of communicating between ships. Today the vast majority of all our telecommunication travels the globe at the speed of light along fibre optic cables. Perhaps closer to Bell's original idea is the work of Professor Harald Haas at the University of Edinburgh, the city of Bell's birth. Haas’ development of ‘LiFi’ – a method of sending huge amounts of data via light – might revolutionise the way we all communicate in the future. 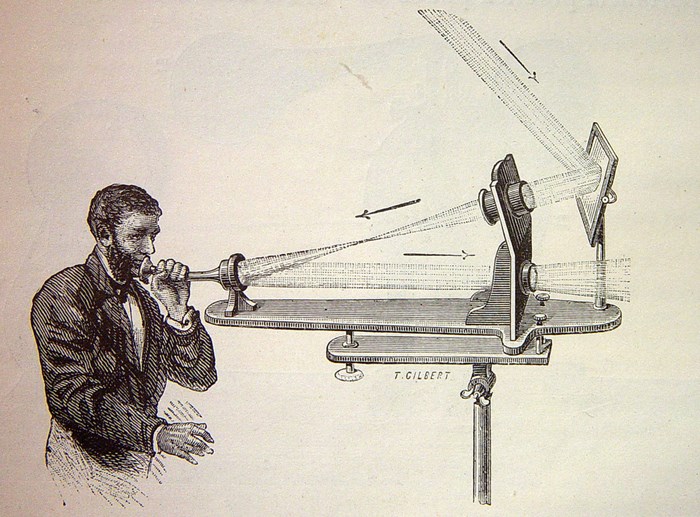 For Bell, however, his foremost passion remained enabling deaf people to lip read and speak, therefore blending into a hearing world. This was in itself controversial to sections of the deaf community, disenfranchising those who preferred to communicate using sign language, which they viewed as the primary language of the deaf.

Bell’s last visit to Edinburgh was in November 1920. At a speech given to pupils at the city’s Royal High School, where he had been a student 60 years before, he imagined that this young generation might live to see a time when someone “in any part of the world would be able to telephone to any other part of the world without any wires at all.” 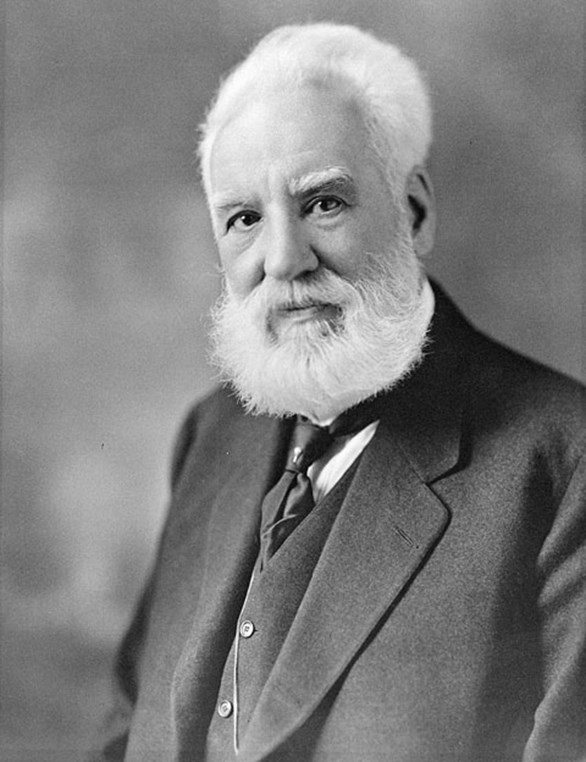 He died on 2 August 1922 aged 75. On the day of his funeral, the telephone systems in the US and Canada were silenced for one minute.