For almost 30 years, anyone who could afford the ticket could shoot across the globe at twice the speed of sound. How? By flying on Concorde, the world’s only supersonic passenger aeroplane.

For almost 30 years, anyone who could afford the ticket could shoot across the globe at twice the speed of sound. How? By flying on Concorde, the world’s only supersonic passenger aeroplane. 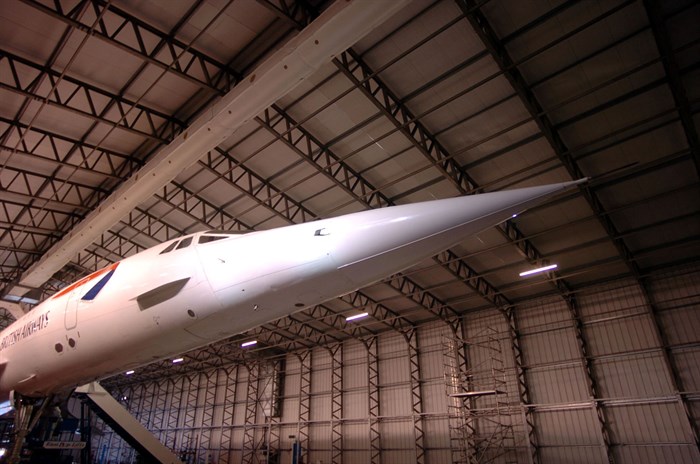 The story of supersonic flight

Britain started to investigate the possibility of building a supersonic passenger plane during the 1950s. On 29 November 1962, an Anglo-French treaty was signed to build Concorde. The British and French governments agreed to share resources for the design, development and manufacture of the supersonic aircraft, which became known as ‘Concorde’ after the French President Charles de Gaulle used the word, which means agreement or treaty, to refer to the project during a speech.

Concorde's first flight took place on 2 March 1969, when the 001 prototype took off from Toulouse in France. When the French test pilot landed Concorde for the first time, he simply said ‘The big bird flies…’ The British-made prototype 002 flew from Bristol's Filton Airfield in the UK a few weeks later. Both models were displayed at the Paris air show in June of the same year.

The Atlantic and beyond

Concorde made her first non-stop crossing of the Atlantic on 26 September 1973. Flying at an average speed of 954mph, the French model flew from Washington, USA to Orly, Paris in a record-breaking time of three hours and 33 minutes.

Commercial flights began on 21 January 1976 when Alpha Alpha flew from London to Bahrain and an Air France Concorde flew from Paris to Rio.

When the Scottish Parliament was formally opened by The Queen on 1 July 1999, Concorde marked the occasion with a flyover in formation with the RAF's Red Arrows to the sound of a 21-gun salute. 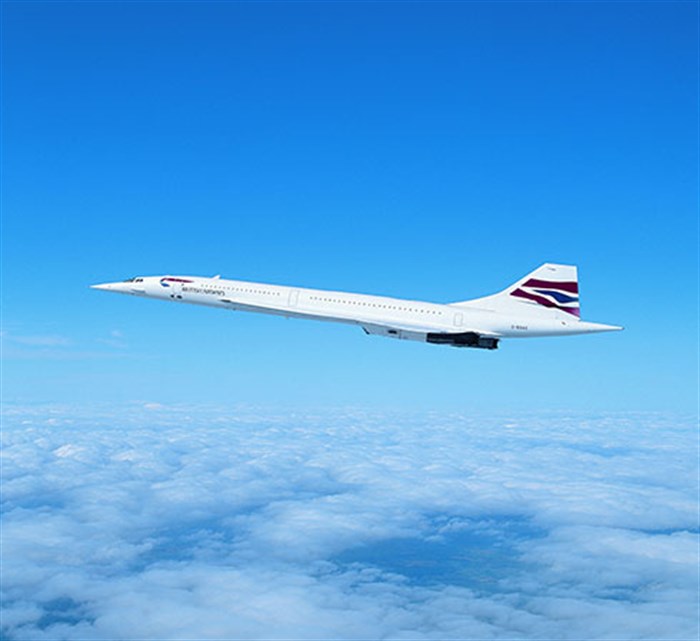 What made a journey on Concorde so special?

Flying faster than the rotation of the earth, Concorde could pick up passengers from London at breakfast time and transport them to New York well before breakfast US time – the same day! Sir David Frost once described Concorde as ‘the only way you can, in human life, be in two places at once’.

More than 2.5 million passengers have flown supersonically on Concorde since 1976, and each one was issued with a certificate to prove that they’d broken the sound barrier. 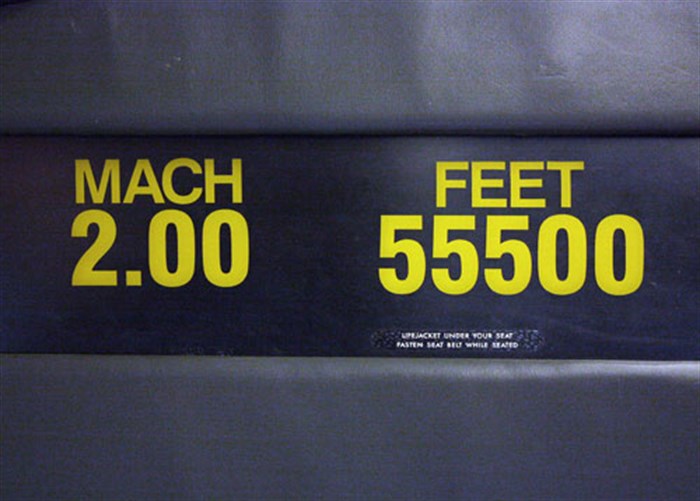 Meanwhile, passengers were literally living the highlife: treated like royalty, they sipped cocktails and champagne, dined on caviar and lobster and sampled fine cigars. Of course, sometimes passengers were royalty: when the Queen flew on Concorde, she always sat in seat 1A.

A ticket wasn’t cheap – in 2003, the standard return fare from London to New York was £6,636 – but you were buying yourself time, prestige and a glimpse of the future.

Between 1976 and 2003 British Airways' Concorde planes operated close to 50,000 flights, clocked up more than 140,000 flying hours and travelled some 140 million miles. At the same time, over 1 million bottles of champagne were consumed! 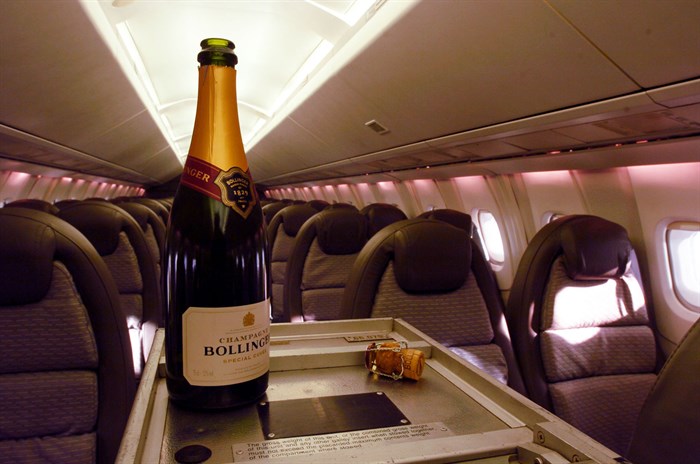 The dream becomes a nightmare

On 25 July 2000, the Concorde dream became a nightmare when an Air France Concorde crashed shortly after take-off at Charles de Gaulle airport in Paris. One hundred passengers, nine crew and four people on the ground were killed. The Concorde fleet of Air France and British Airways were subsequently grounded, but not before Alpha Alpha made what was to be her final flight, from JFK New York to London Heathrow on Saturday 12 August 2000.

In 2001, Concorde was back after a £17m revamp, but Alpha Alpha was not selected for upgrade. But British Airways and Air France could not have foreseen the events of 11 September and the slump in worldwide air travel. Empty seats and an ageing fleet of planes meant only one thing: Concorde had reached the end of the road.

On 10 April 2003, British Airways announced that it was retiring its fleet of seven Concordes. A farewell tour of the UK and North America commenced, with tens of thousands of fans saying their goodbyes to the iconic aircraft.

The decommissioned aircraft have gone on public display at museums around the world, with G-BOAA (Golf-Bravo Oscar Alpha Alpha) taking pride of place at the National Museum of Flight in East Fortune. 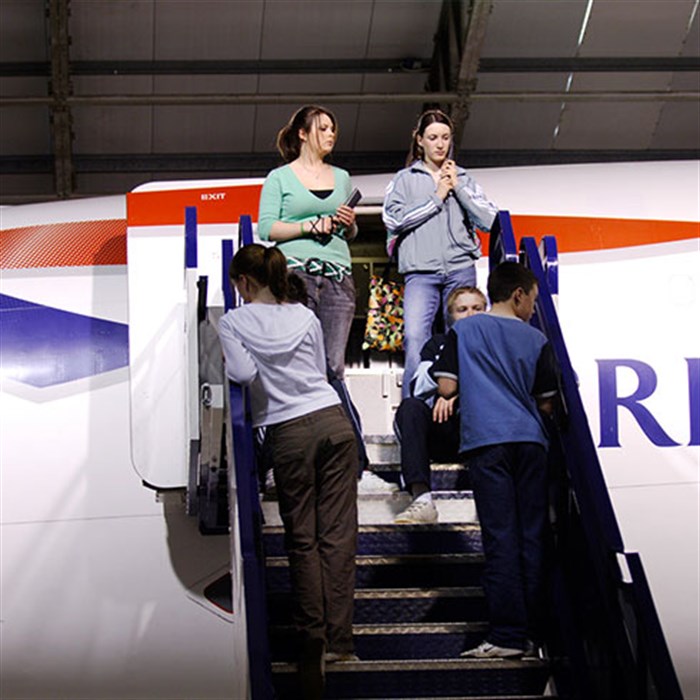 Scotland’s Concorde, Golf-Bravo Oscar Alpha Alpha, was the first of her kind to go into service with British Airways. Since her maiden flight in January 1976, she has flown for a total of 22,768 hours and 56 minutes, landing 8,064 times and going through 6,842 supersonic cycles. In almost 25 years of service, she has traversed the globe, touching down in New York, Paris, Bahrain, Miami, Calcutta, Auckland and Barbados.

In 2004, G-BOAA said farewell to Heathrow and took to the water on the first step of a seaborne journey to Scotland. After being moved from Heathrow on a transporter, Concorde was loaded onto a specialist barge, the Terra Marique, at the tiny Thames port of Isleworth. From here she sailed up the Thames and along the east coast of Britain, arriving on Scottish soil a day early the following Saturday, where she was rolled ashore at the British Energy jetty at Torness, East Lothian. 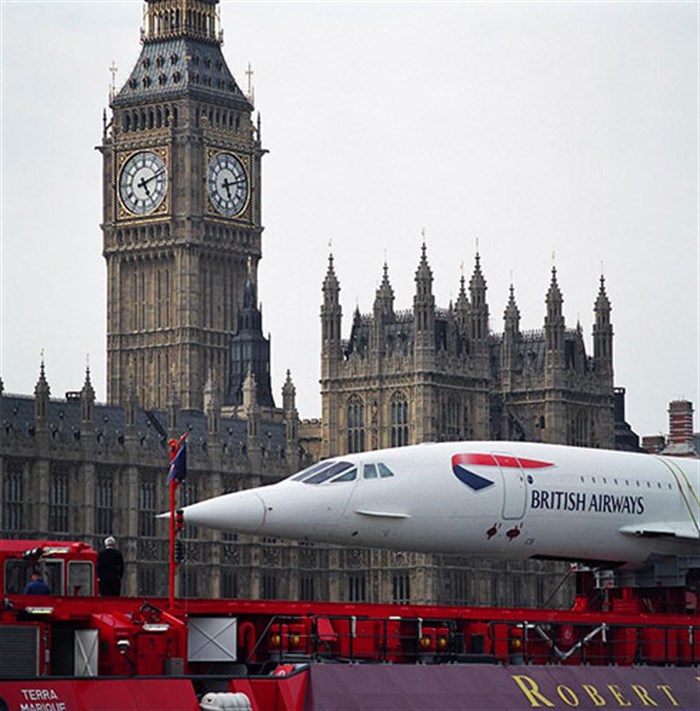 Concorde's week-long journey from London ended in an hour-long trundle across muddy fields to East Fortune, guided by members of 39 Engineer Regiment's 53 Field Squadron (Air Support), with a helicopter hovering overhead, to a greeting by two pipers. At the time, Concorde's journey north was thought to have been one of the most complex of any transport venture undertaken.