Sir James Black was one of the greatest Scottish scientists of the modern era. His work in medicine and pharmacology has improved the quality of life for millions of people around the world.

In 1988 Sir James Black was awarded the Nobel Prize for Physiology or Medicine for his outstanding scientific work. He was given this honour for the development of principles which led to his invention of two major drugs, propranolol, a beta-blocker used for the treatment of coronary heart disease, high blood pressure and heart failure, and cimetidine, used in the treatment of stomach ulcers.

The Nobel Prize is an international award administered by the Nobel Foundation in Stockholm, Sweden. Since 1901 it has been awarded for exceptional achievements in physics, chemistry, physiology or medicine, literature and peace.

James Whyte Black was born in Uddingston, near Glasgow, in 1924. His father had left school and become a miner at 13, although he later became a mining engineer and colliery manager. He had a passion for education and wanted all his sons to have a good start in life.

Despite claiming that he ‘coasted, daydreaming, through most of [his] school days’, James was encouraged by his outstanding maths teacher to apply for a scholarship to St Andrews University, which he won. He enjoyed his studies and in 1946 he received his medical degree. 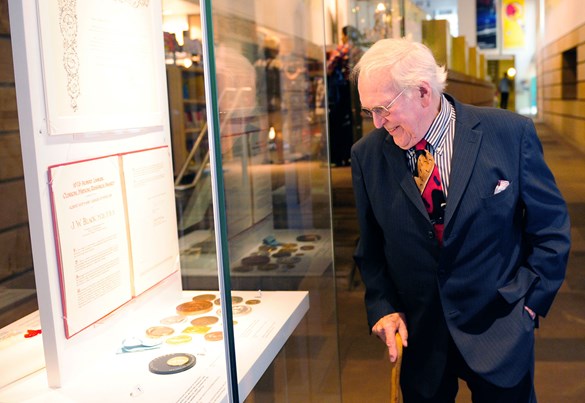 Above: Sir James Black at the presentation of his collection to the National Museum of Scotland.

Sir James Black’s career was divided between universities and the pharmaceutical industry. This diversity allowed him to apply his own unique approach to pharmacology, balancing scientific discoveries with inventions. His personal aims were always for scientific rather than financial success.

In 1958 he joined ICI as a Senior Pharmacologist to work on his ideas about the physiology of the heart. Following the success of this project he was expected to spend much of his time promoting this work, which did not interest him. Instead, in 1964 he became Head of Biological Research at Smith, Kline & French Laboratories, where he explored a problem relating to the secretion of stomach acid.

Sir James Black’s pioneering work has resulted in global acclaim. He was knighted in 1981 and in 2000 he was appointed to the Order of Merit; the highest honour the Queen can bestow.

This family of drugs blocks some of the actions of the hormone adrenaline, a chemical messenger which triggers the well-known ‘fight or flight’ response to stress. One of the effects of adrenaline is a racing pulse which increases the blood flow to muscles. In patients with vulnerable hearts this increased demand can overtax the heart and cause further illness, or death. Sir James Black deliberately built a drug which would be similar enough to adrenaline to block the chemical receptors, but different enough not to trigger this potentially harmful reaction. 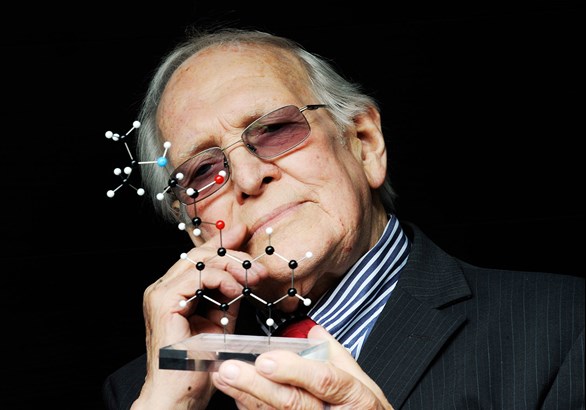 Above: Sir James Black with a molecular model of propranolol made by Miramodus for the National Museum of Scotland. He was so taken with the model that it was gifted to him, and another model was produced for the museum.

From 1964 using the same scientific approach, Sir James Black worked for nine years on the development of a drug which would block some undesired actions of the hormone histamine.

Anti-histamines were already on the market, to reduce the effects of allergic reactions, but these had no effect on another function of histamine, the triggering of stomach acid secretion.

Corrosive stomach acid can cause extremely painful peptic ulcers, and prevent them healing. Antacids only provided short term relief, and surgery to remove the ulcer had serious side effects and uncertain success. Sir James Black’s research identified the trigger that releases the harmful acids and then developed the drug cimetidine to block it. Cimetidine was a spectacular commercial success and led to a family of drugs which are still in use today.

Millions of people around the world have cause to be grateful for the families of drugs developed through Sir James Black’s pioneering research.

The beta-blocker family of drugs has been used in cases of high blood pressure, heart attacks, angina pectoris and other circulatory problems.

Cimetidine was the first successful non-surgical treatment for stomach ulcers, and gave more relief than eating antacids ‘like sweets’. The drug was an immediate success and rapidly became used worldwide.

Sir James Black also used his drug design approach to assist with the creation of new drugs for epilepsy and anaesthesia.

An amazing achievement for a modest man from the mining community of lowland Scotland.

The Nobel Prize at National Museum of Scotland

Sir James, who received the Nobel Prize for Medicine in 1988, gifted his collections to the museum shortly before his death. He said that one of the keys to his success was the freedom he had to daydream. He was keen that these items, that are symbolic of scientific success, came to the Museum to provide inspiration for future generations.

Sir James Black’s Nobel Prize medal is displayed alongside other awards won during his career in the Enquire gallery, which explores how scientific discoveries are made. You can see further objects from Sir James Black’s collection in the slideshow below.