History of the typewriter

The typewriter not only revolutionised offices, but also transformed the world of work, especially for women. But the impact of these machines has been much wider than just speeding up the way we write.

The typewriter helped revolutionise the world of work and change the lives of working women in particular. It helped them launch their own businesses at a time when female employers were rare and became a vital weapon in the fight for women’s suffrage. Typewriters inspired novelists and artists, with American writer Mark Twain among the first to use what he called a “new-fangled writing machine”.

Despite being erased from many offices by the rise of computers, the typewriter has remained a beloved design icon which is still in use today.

Inventors across Europe and America experimented with writing machines throughout the 19th century. Many of these devices were made for people with visual and hearing impairments. Instead of a keyboard, the operator turned a dial to choose a letter and then pressed a lever or key to print it on paper. They may not look like our idea of a typewriter, but they show there was a growing interest in devices that could print individual documents.

Versions of these Columbia typewriters were commercially successful as they were a fraction of the price of a keyboard machine and worked fine for someone at home typing a few letters (T.1949.3.1).

Keyboard typewriters in a form we would recognise today were first sold by American firm E. Remington & Sons in the 1870s. The first shipments arrived in Scotland in 1876.

They were luxury devices which would have been out of reach for many people at the time, costing the equivalent of half the average annual salary. 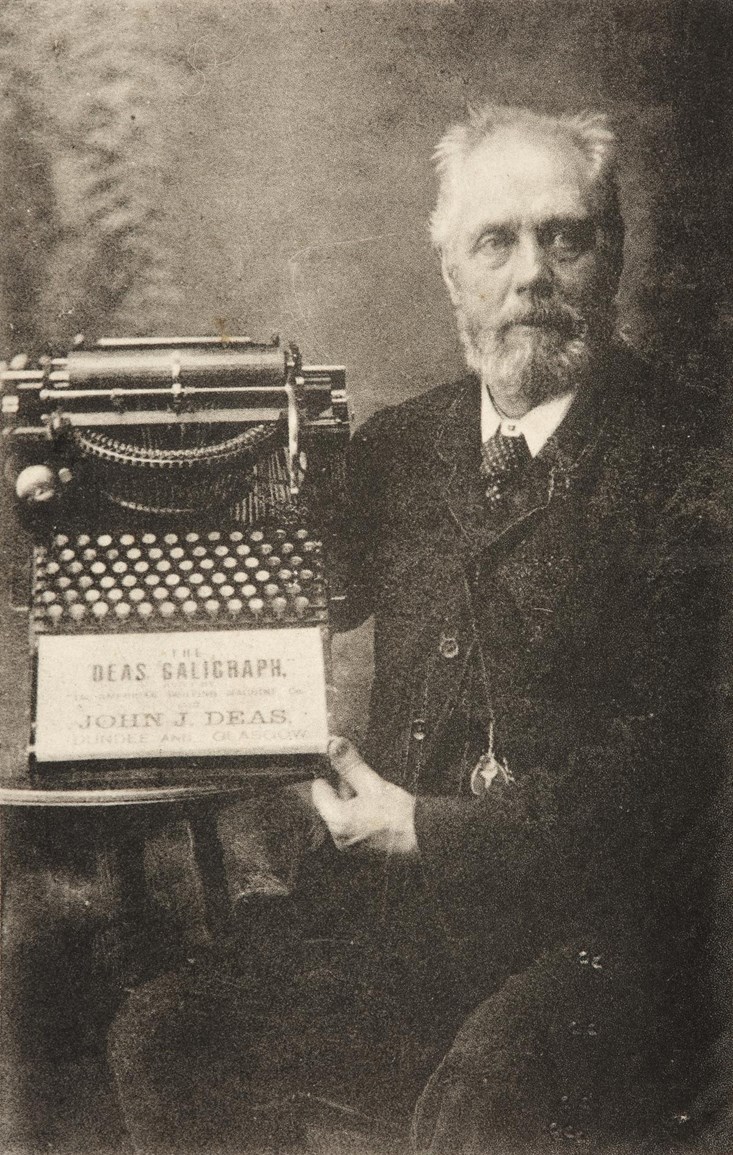 While some people were sceptical about the new technology, others embraced it eagerly. Sewing machine salesman John J Deas was an early enthusiast. Adverts for his business in Dundee and Aberdeen claimed the typewriter would "do for the ink-bottle and the pen, what the sewing machine has done for the needle". 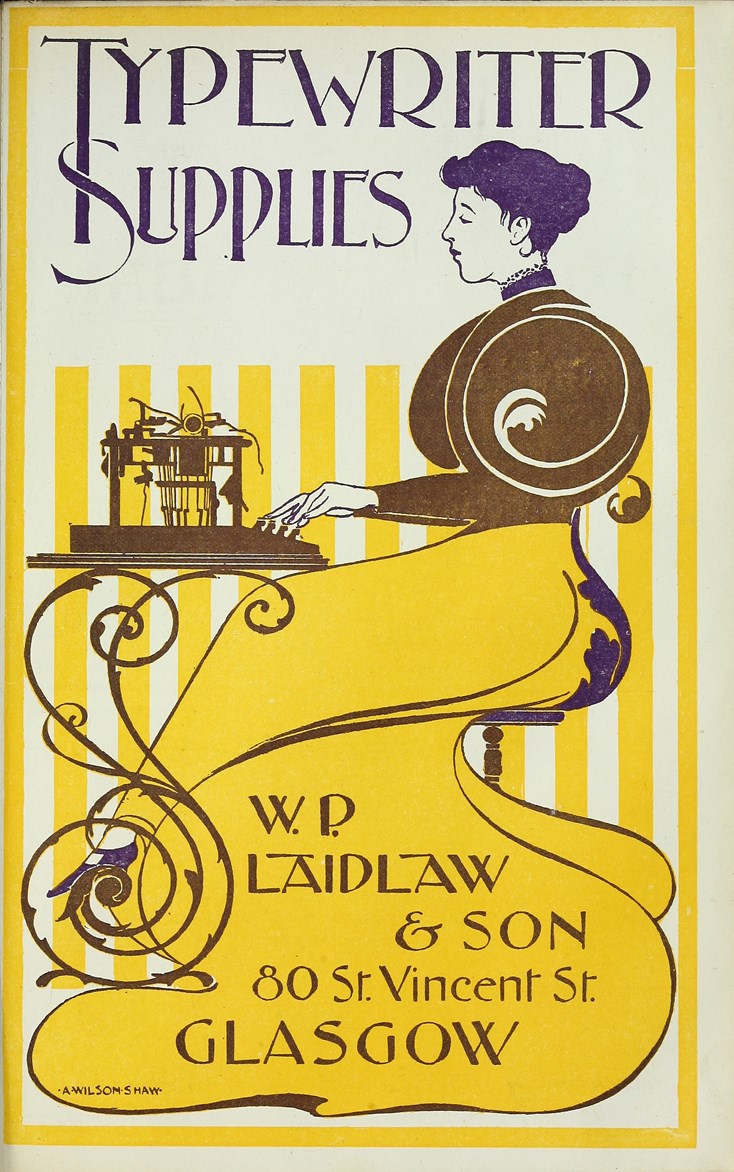 The final decade of the 19th century saw a huge boom in the demand for typewriters as organisations began to realise their value in streamlining and modernising office work. From just two or three dealers in Scotland, the number of businesses selling them soared. With more firms realising their benefits, the opportunity arose for people to train as professional typists.

Thousands of typists took up new typing positions in businesses and government institutions, transforming traditionally male working environments. The tradition of employing female telegraph operators helped it be seen as a suitable job for women. Typing jobs offered better pay and safer working conditions compared to other work available to women. However, they were often paid less than their male colleagues and were expected to leave when they married.

The first typewriter brands were American or European and shipped to the UK. By the 1890s there were several British makers competing with their own brands.

Olivetti opened their factory in the east end of the city, producing stylish models such as the Lexikon 80 and the portable Lettera 22, which were seen as the cutting edge of design. A lot of artists, musicians and writers used them, such as Leonard Cohen, Bob Dylan and Sylvia Plath, with the portable Lettera 22 always a favourite. In the late 1950s, a young Alex Ferguson started as an apprentice at the Remington Rand factory, soon abandoned for a more promising career in football.

Typewriter technology advanced to include electric models, before the rise in computers saw them gradually phased out of offices. However, the unique experience of writing on a typewriter and the enduring beauty of their design mean there is still a demand for the machines.

Whatever you use – a pen, computer or typewriter – has an effect on how you write and the style you develop. And it isn’t just the process of typing that attracts users to the machines. 19th century American novelist Henry James found the noise of a Remington typewriter inspiring. For some, the typewriter focused their thinking.

“
There is no doubt that the effort involved in typing...does help me in keeping to the point.
- The queen of crime, Agatha Christie, commented

The typewriter continues to be a source of inspiration for writers. In 2017, collector and actor Tom Hanks released Uncommon Type, a collection of short stories that all featured a typewriter.

Today, many people are going back to using typewriters. The machines are no longer produced in the UK, but they continue to fascinate people and are making a comeback. Embraced by those who want to re-engage with the basic act of writing without the distractions of the digital world, the typewriter has become a new vehicle for creativity and expression.

Typewriters are being used by artists in many different ways. Inspired by its rhythmic sounds, The Boston Typewriter Orchestra plays music on typewriters. 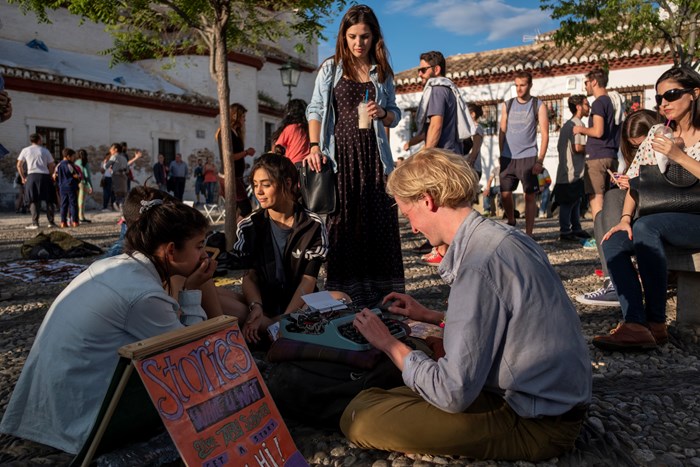 But for other people, the typewriter is a chance find in a charity shop or an eBay temptation which might inspire them to type the occasional letter, taking time to create a message which is of lasting value to both the writer and the recipient. Over time, the typewritten letter has gone from being an impersonal document to a highly personal and thoughtful gift for friends and family.

Discover over 100 years of typewriters in our collection.

Header image: Close up of keyboard of the Remington No.2 Typewriter.