Discover how Victorian inventors and entrepreneurs succeeded in capturing the very first images.

What is a daguerreotype?

Nowadays we often refer to any old-looking, sepia-tinted photograph as a ‘daguerreotype’. But the word daguerreotype in fact refers to a specific photographic process, invented by the flamboyant Parisian inventor and entrepreneur Louis Jacques Mandé Daguerre (1787-1851).

Daguerre was the first person to publicly announce a successful method of capturing images. His invention was an immediate hit, and France was soon gripped by ‘daguerreotypomania’. Daguerre released his formula and anyone was free to use it without paying a licence fee – except in Britain, where he had secured a patent. 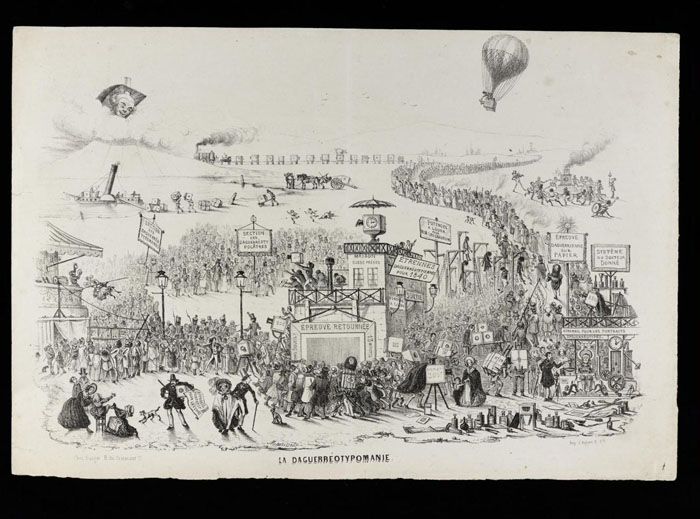 Above: Black and white lithograph entitled La Daguerreotypomanie. From the Howarth-Loomes Collection at National Museums Scotland. 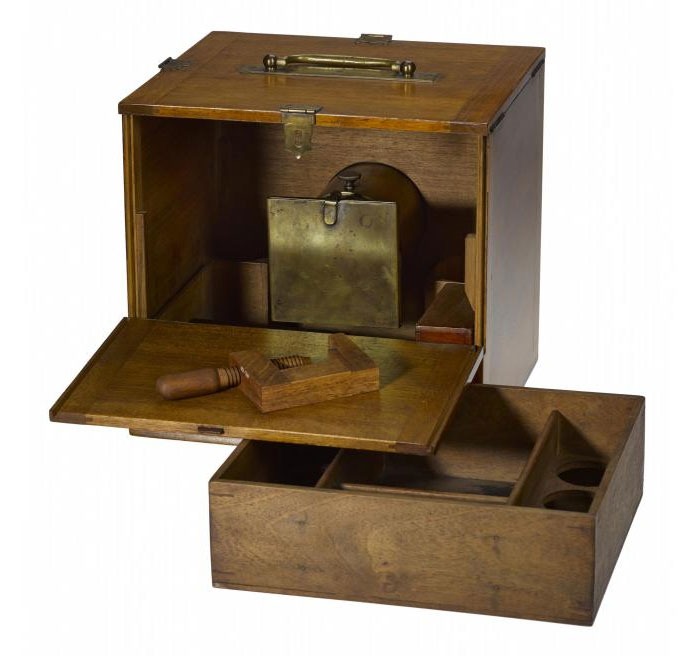 Above: Daguerreotype camera designed by Marc Antoine Gaudin (1804‑1880) of Paris in 1841 and made commercially by the instrument‑maker NMP Lerebours (1801‑1873). This example has been adapted to take small rectangular images, and is fitted into a wooden box which once also contained the necessary equipment and chemicals.

A daguerreotype is a single reversed image, made as a direct positive onto a silvered copper plate. Its reflective surface is an easy way to tell the difference between a daguerreotype and an early photograph taken using a different technique. The image is made of a combination of silver and mercury, resting on that plate. It is extremely vulnerable to damage, and can easily be brushed off, even after being ‘fixed’. Because they were so fragile, they were usually protected with a cover-glass and held in small leather-bound cases as treasured objects, in many ways similar to miniature painted portraits.

The short film below shows the reflective surface of a daguerreotype. 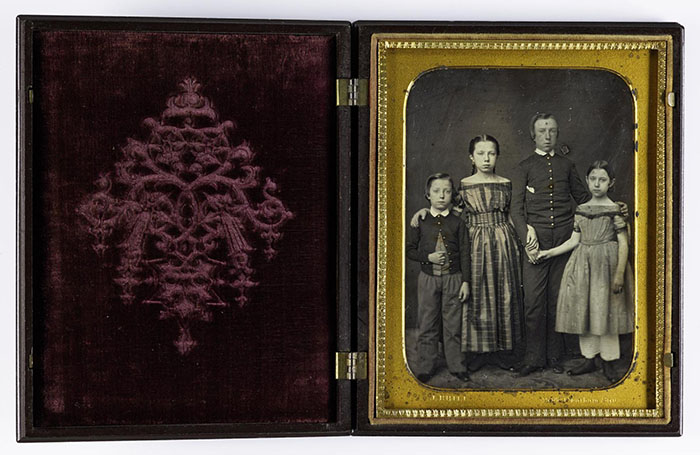 Above: Daguerreotype of two boys and two girls, by Julius Brill of New York, 1852-60. From the Howarth-Loomes Collection at National Museums Scotland.

See more daguerreotypes from the exhibition in our collections search.

What other processes were invented?

Daguerre was not the only person experimenting with photographic techniques in the early 19th century. Across the channel, English landowner, scholar and scientist William Henry Fox Talbot (1800-77) had produced his first successful negative, in the summer of 1835. 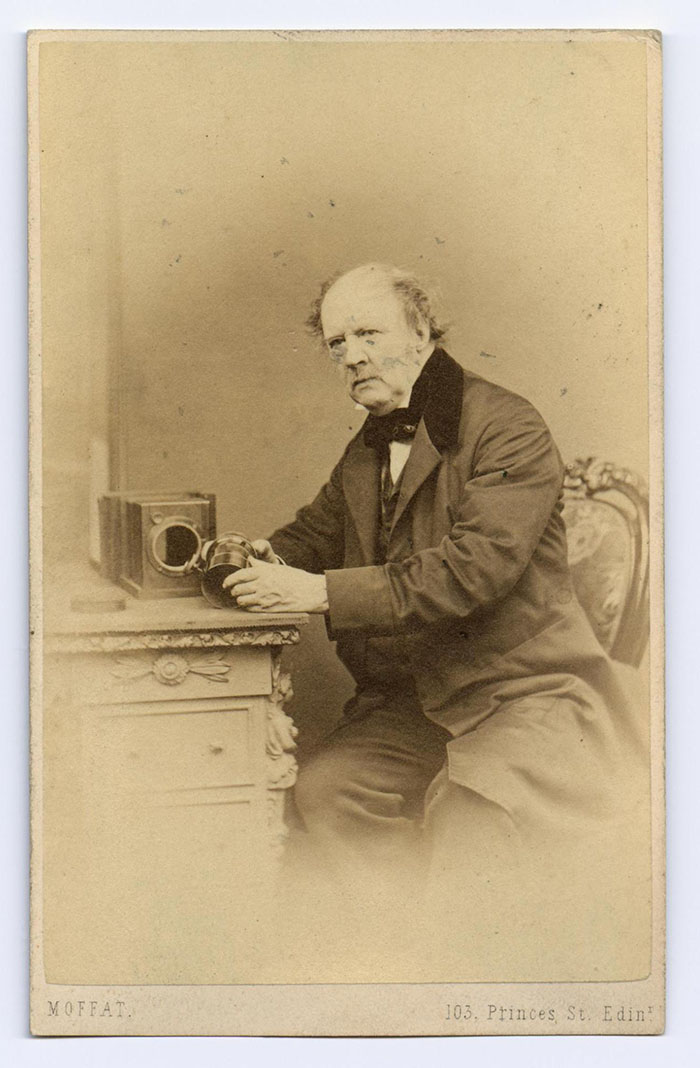 Above: Carte-de-visite of seated William Henry Fox Talbot holding the lens of a camera, by John Moffat, Edinburgh, 1864.

After further work, he discovered the possibility of developing an invisible latent image (formed during much shorter exposure times), and patented his improved process in February 1841. This process – known as the calotype – is the ancestor of nearly all photographic methods using chemistry, until the emergence of digital photography during the late 1990s.

The calotype negative was made by projecting an image through a lens on to a piece of chemically sensitized paper fixed inside the camera, where it formed a latent image on the paper, unseen by human eye. When developed, this produced a negative image. In turn, this negative was placed in the printing frame with a second piece of sensitized paper beneath it and exposed to sunlight. This produced a positive image, which had to be fixed with chemicals. 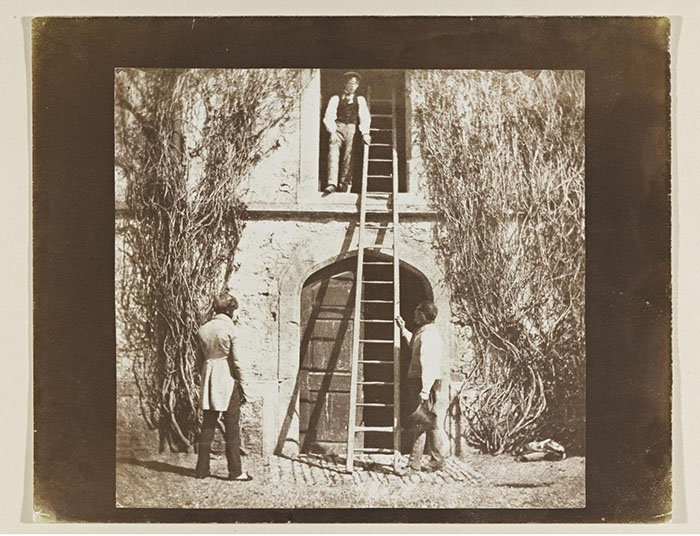 Above: The Ladder, Plate XIV from Talbot’s Pencil of Nature, the first book to be illustrated with photographs. Salt print from a calotype negative.

Calotype images are not as pin-sharp as daguerreotypes, but they had one great advantage: more than one image could be produced from a single negative. Yet both processes were cumbersome and very expensive. What was needed was a faster, cheaper method to really fuel the fire of Victorian photomania. 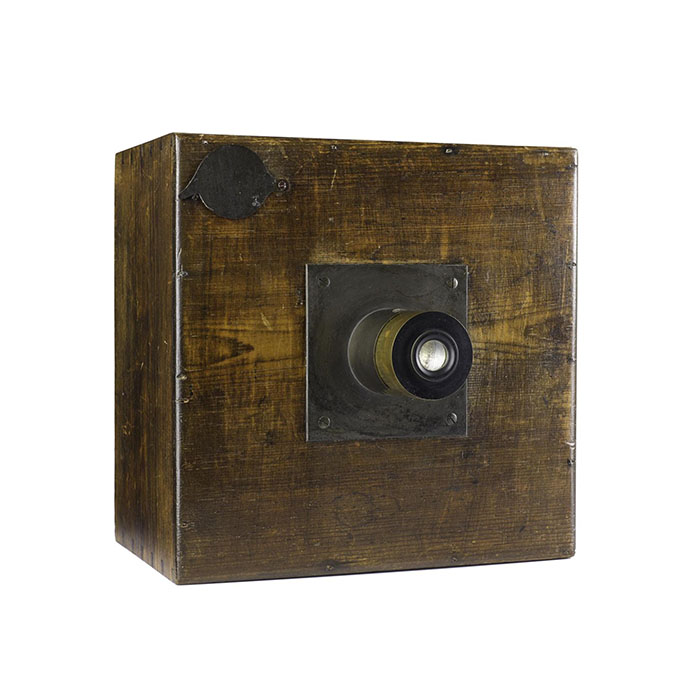 Above: Early calotype camera with lens dating from c. 1840, used by Talbot.

See more calotypes from the exhibition in our collections search.

How did photography become cheaper?

And so we come to 1851, when London-based sculptor Frederick Scott Archer (1813-57) announced his new form of photography, the wet collodion process. This combined the best of Daguerre and Talbot’s methods, but was easier and cheaper than either, enabling it to become a commercially viable method. The public loved it, and Archer’s process became the foundation of photography for the next 140 years.

A glass plate is coated with the wet collodion solution containing light-sensitive silver salts and exposed whilst the plate is still wet. Photographs have to be taken within 15 minutes of coating the plate so a portable dark room is needed; however, the exposure time is less than for daguerreotypes and calotypes, making outdoor photography easier. A sharp glass negative image is created that captures microscopic detail. Positive copies can be made from this, usually of albumen prints on paper. These prints are sharper than those created by Talbot’s calotype process and less liable to fade. 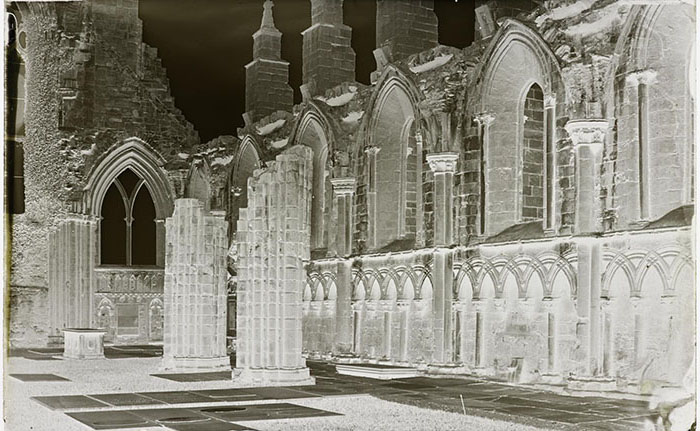 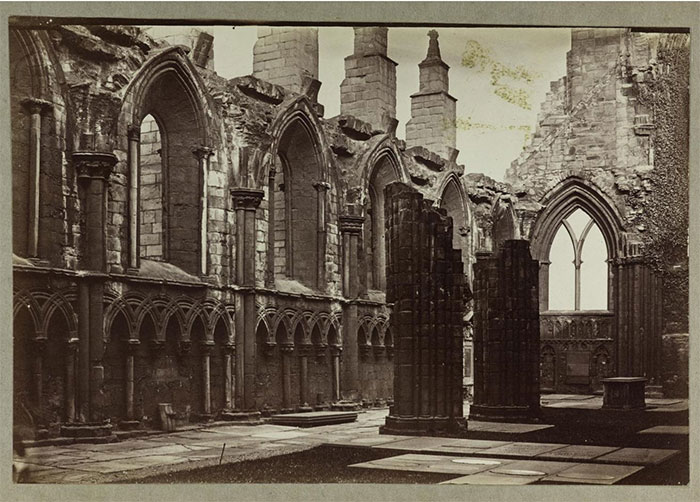 How was Archer’s method used?

Ambrotypes (or wet collodion positives) were formed by painting the back of the glass negative image with black paint, or placing a piece of black card there. The negative could be placed into a protective case, resembling that of the daguerreotype, with which it is sometimes confused. The ambrotype, however, lacks the mirror-like surface of the daguerreotype. 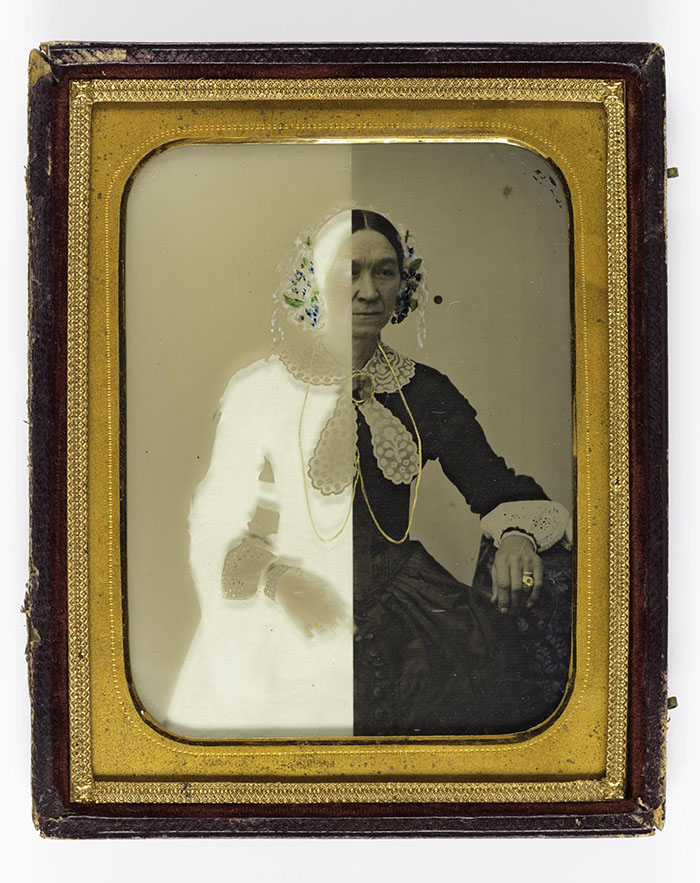 Above: In this example of an ambrotype (wet collodion positive), half of the black backing has been removed to demonstrate the effect of a dark background under the bleached negative. From the Howarth-Loomes Collection at National Museums Scotland.

See more ambrotypes from the exhibition in our collections search.

The tintype, or ferrotype, process was a cheaper development of the wet collodion method, producing a single, positive image on a tinned or enamelled iron support. Often these were embellished with an unsubtle amount of colour, sometimes to the extent that the image no longer looked like a photograph. 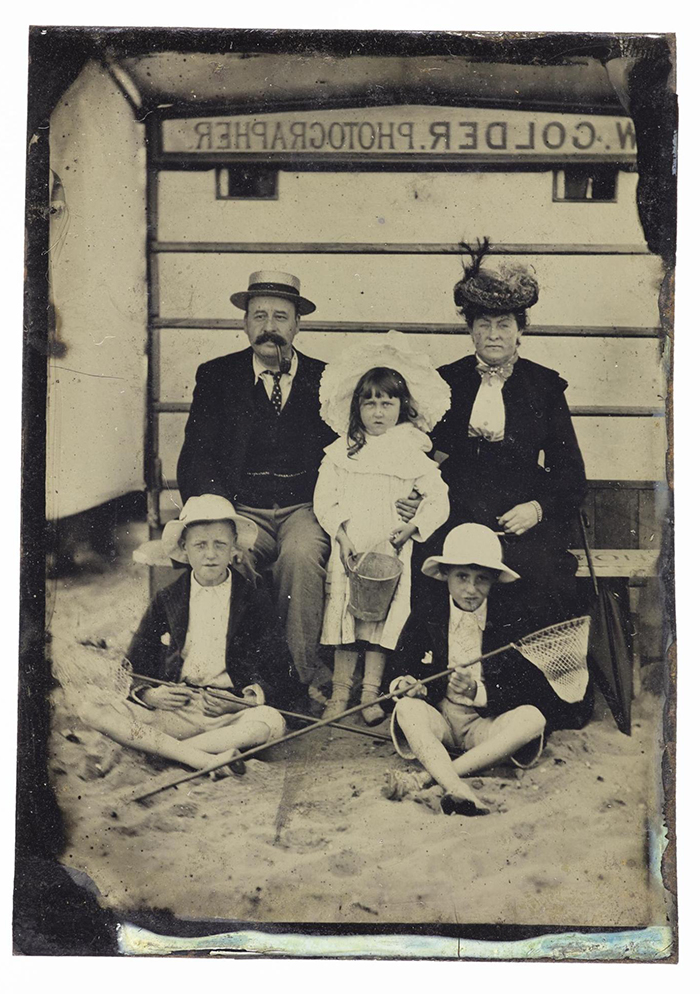 Above: Tintype showing a family group of parents and three children, the two boys with fishing nets and the girl with a bucket, 1880s-90s. The photograph has been taken outside a photographer’s beach hut with the sign in reverse: ‘W. COLDER PHOTOGRAPHER’. From the Howarth-Loomes Collection at National Museums Scotland. 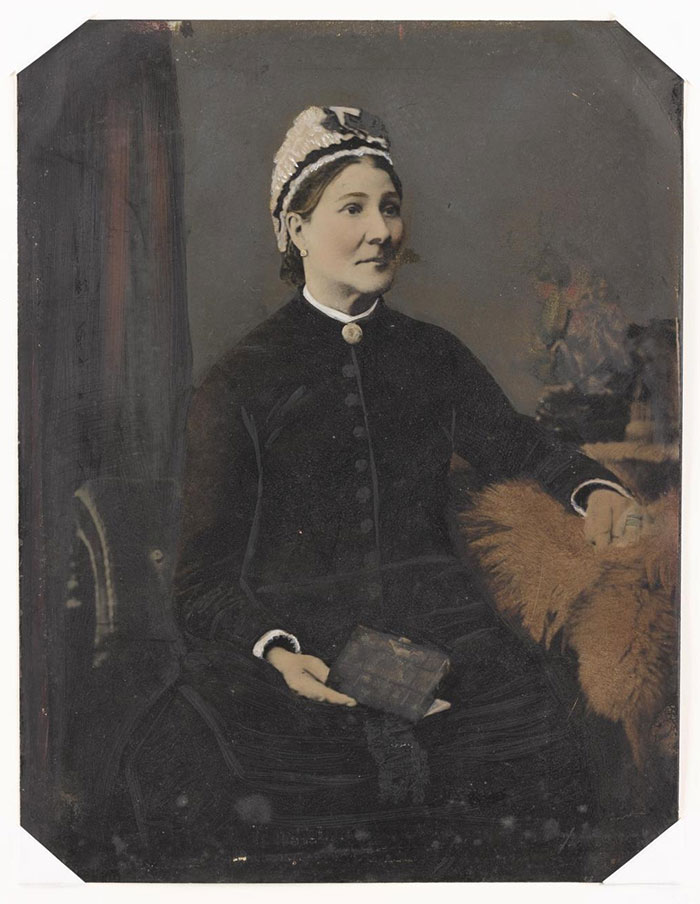 Above: This tintype of a woman has been heavily tinted. From the Howarth-Loomes Collection at National Museums Scotland.

Despite the poor quality of the many of the images that resulted from using this process, tintypes enjoyed a long run of popularity, and were still being produced well into the twentieth century, especially by beach photographers. The finished photograph could be handed to the customer within minutes, and prices were seldom above 6d (about £2 today). 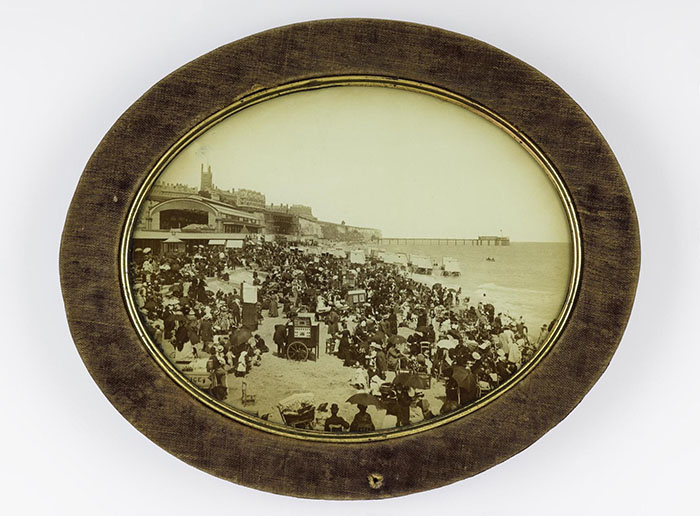 Above: Seaside scene showing beach photographers. Albumen print from a wet collodion negative by Poulson, Ramsgate, 1882. Many of the photographers in this picture would have been using the tintype for a souvenir sale. The scene has been identified as the beach at Ramsgate: the Chatham and Dover Railway terminus can be seen almost on the shore. From the Howarth-Loomes Collection at National Museums Scotland.

See more tintypes from the exhibition in our collections search.

Also in 1851, the scientist Sir David Brewster (1781-1868) presented lenticular stereoscopy to the world for the first time, at the Great Exhibition in the Crystal Palace, Hyde Park, London.

The word stereoscopy derives from the Greek stereos, meaning ‘firm’ or ‘solid’, and skopeō, meaning ‘to look’ or ‘to see’. Any stereoscopic image is called a stereogram. Originally, ‘stereogram’ referred to a pair of stereo images which could be viewed using a stereoscope. Most stereoscopic methods present two slightly differing images separately to the left and right eye of the viewer. These two-dimensional images are then re-combined by the brain to give the viewer the perception of 3-D depth.

Both stereo-viewers and images were an instant success with visitors, who were enchanted by the new three-dimensional effect.

Above: Stereocard of the Art and Science Museum, Edinburgh (now the National Museum of Scotland) by H Gordon of Aberdeen. The image shows a ground floor gallery and a balcony of natural history specimens, both taxidermy and skeletal. You can see how this sterecard would look through a viewer here (requires a browser with WebGL).

Above: Stereocard entitled 'The Making of Stereographs', by an unknown photographer, 1860. From the Howarth-Loomes Collection at National Museums Scotland.

David Brewster’s lenticular stereoscope was developed by a number of manufacturers hoping to benefit from the huge demand for the images. Hundreds of thousands of stereoscopic images were sold in a major craze which reached every middle-class Victorian drawing-room. Special cameras were developed to make the images, and a variety of viewers produced to keep up with demand. Portraits, scenery, comedic scenes and images of far flung places were all particularly popular. 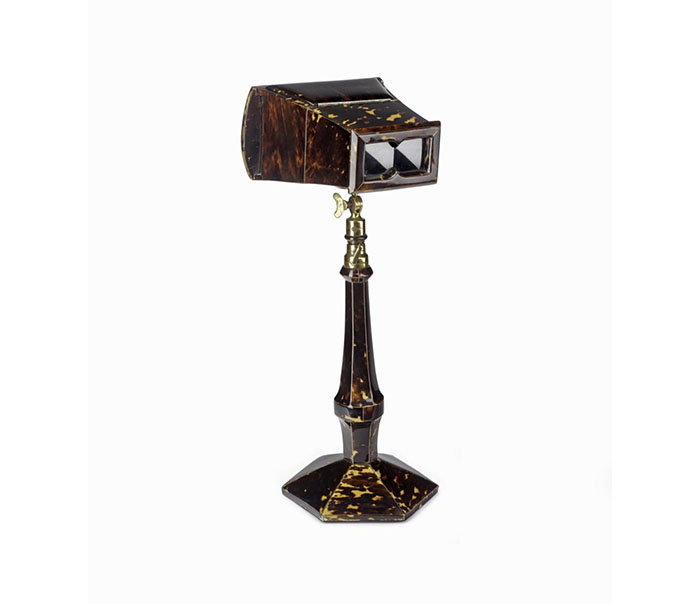 Above: Brewster stereoscope on a tortoise-shell stand, made c. 1860. From the Howarth-Loomes Collection at National Museums Scotland. 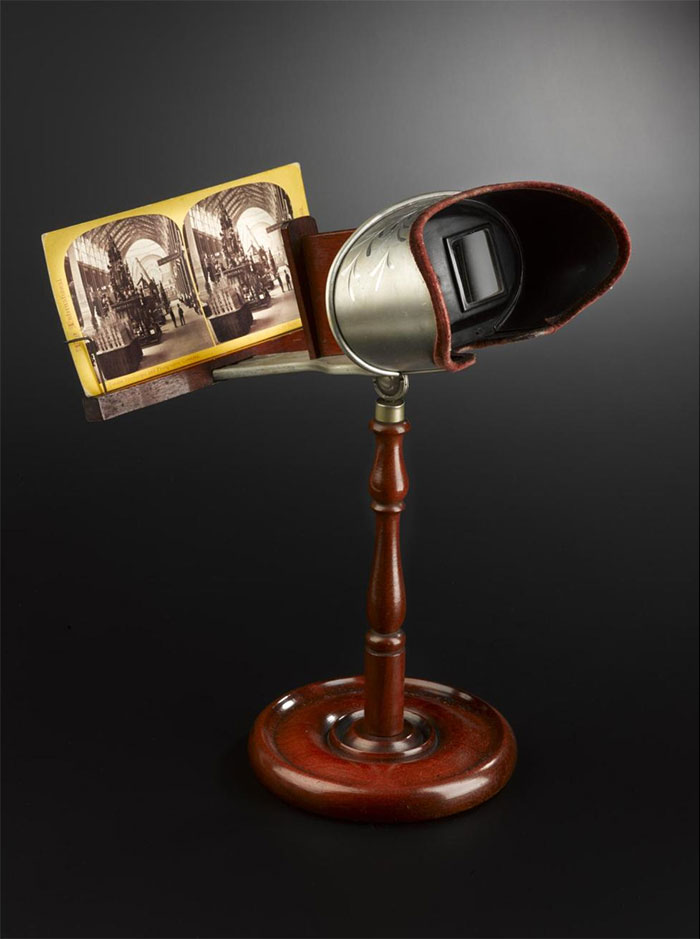 Above: Hand-held stereoscope on a stand, American, c.1900. From the Howarth-Loomes Collection at National Museums Scotland.

See more stereocards from the exhibition in our collections search.

When aspiring Parisian photographer André Adolphe Eugène Disdéri (1819-89) realised that he could reduce his costs by taking several smaller negatives on a single plate, he single-handedly created a brand new craze. The carte-de-visite was undoubtedly the most popular form of 19th-century photography: the Victorian era’s answer to the ‘selfie’. Carte-de-visite fever reached England in about 1857, and unlike earlier forms of photography, it reached almost every level of society. 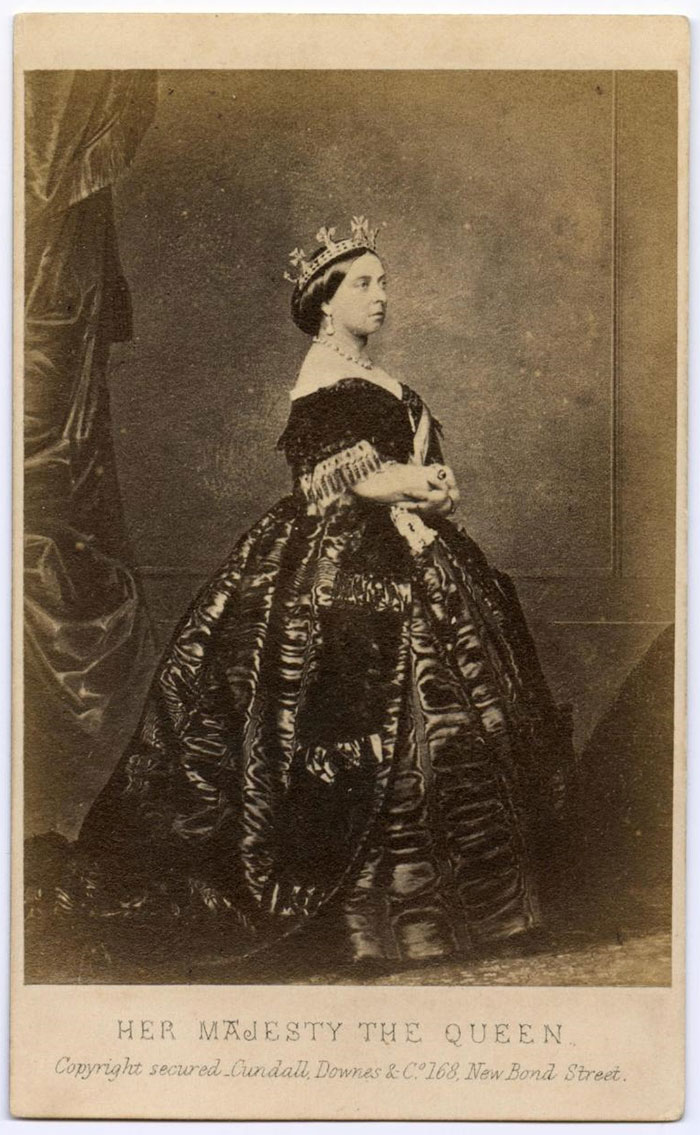 Above: Carte-de-visite of Her Majesty the Queen, by Cundall, Downes & Co, London, printed on the back: Photographed from life by C Clifford of Madrid, November 14 1861. This was probably the first image of the Queen taken for public distribution. She wrote in her Journal, that for it she 'dressed in evening dress, with diadem and jewels'. From the Howarth-Loomes Collection at National Museums Scotland.

See more cartes-de-visite from the exhibition in our collections search – can you spot our Victorian celebrities?

In 1888, George Eastman of the Eastman Dry Plate & Film Company of Rochester, New York, launched a new camera that further widened the market for popular photography. His product was called the Kodak, because Eastman wanted something short, pronounceable and unmistakable in a number of languages. The Kodak camera, costing $25 (about £420 today) came factory-loaded with a sensitised roll-film, enough for one hundred circular images. After these had been exposed, the entire camera was returned to the factory, for the removal, development, and re-loading with a new roll of film, all for $10 (about £165 today).  Eastman advertised this with the successful slogan: You press the button, we do the rest.

The Kodak camera revolutionised the photographic market with its simplicity of use and freedom from the mess of darkroom chemistry. It marked the beginning of photography as a tool and hobby for everyone. 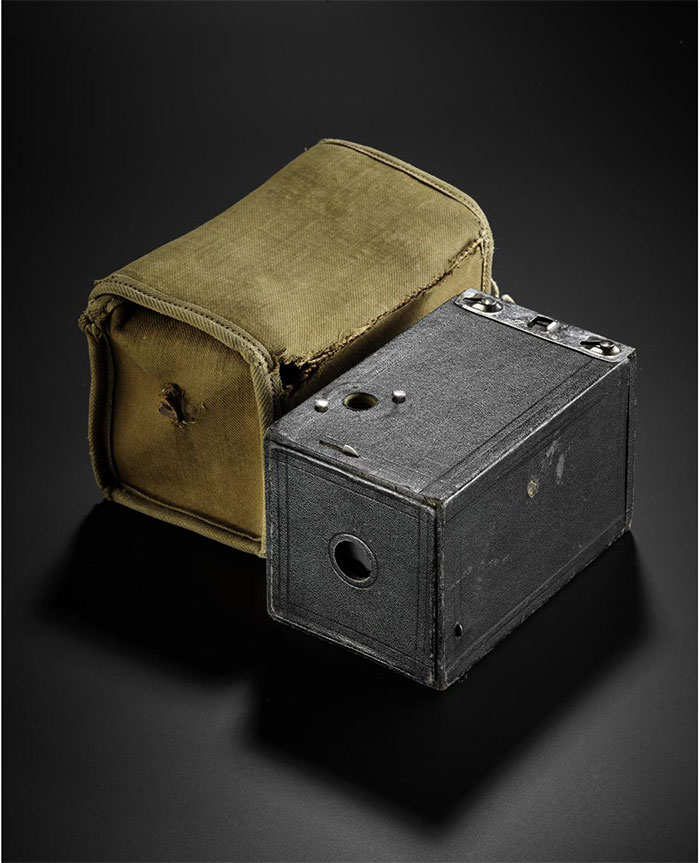 Above: Box Brownie roll-film camera, made by Eastman Kodak Company, New York, c.1900. This is the first in the series of Eastman Kodak’s Brownie cameras. Made of leatherette-covered cardboard and selling for a dollar, it popularised low-cost photography and over 250,000 were sold.

In 1981 Sony revealed the Sony Mavica, the first digital electronic still camera. 34 years later, with around half the world’s adult population carrying a camera in their pocket in the form of their mobile and over 1.8 billion photos uploaded every day, photography is more of a sensation than ever. It’s estimated that every two minutes, we take as many photos as were taken during the whole 19th century. What would Daguerre and Talbot have made of that?