The Galloway Hoard brings together the richest collection of rare and unique Viking-age objects ever found in Britain or Ireland.

“
Nothing like this has ever been found in Scotland.
- Dr Martin Goldberg, Principal Curator of Medieval Archaeology and History

What is the Galloway Hoard?

Buried at the beginning of the 10th century in Dumfries and Galloway, the Galloway Hoard lay undisturbed for a thousand years before being unearthed by a metal detectorist in September 2014.

This incredible discovery comprises more than 100 objects, including a rich Viking Age hoard of silver jewellery and ingots. It also contains an unparalleled range of precious metal and jewelled items, including a rare gold ingot, a unique gold bird-shaped pin and a decorated silver-gilt vessel, the only complete lidded vessel of its type ever discovered in Britain and Ireland.

This vessel contains further unusual objects: beads; amulets of glass and rock crystal; a silver penannular brooch; another gold ingot; five Anglo-Saxon disc brooches of a kind not found in Scotland before; and two examples of a new type of quatrefoil brooch. Carefully wrapped in fragile textile bundles are a rock crystal flask or jar and jewelled aestels, pointers used to read and mark places within medieval manuscripts. 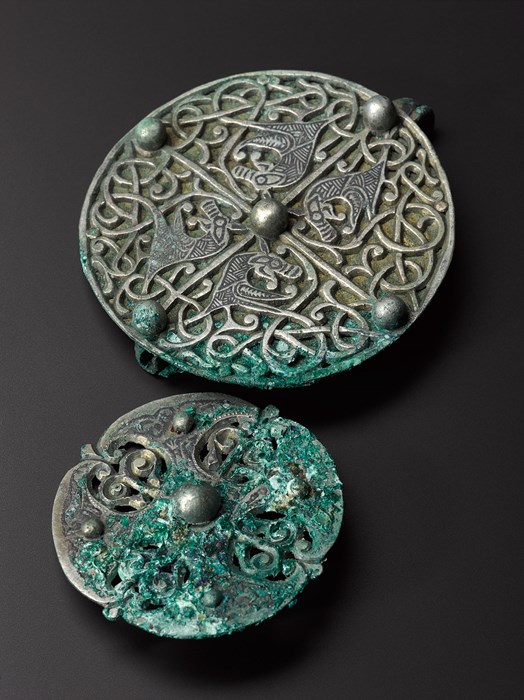 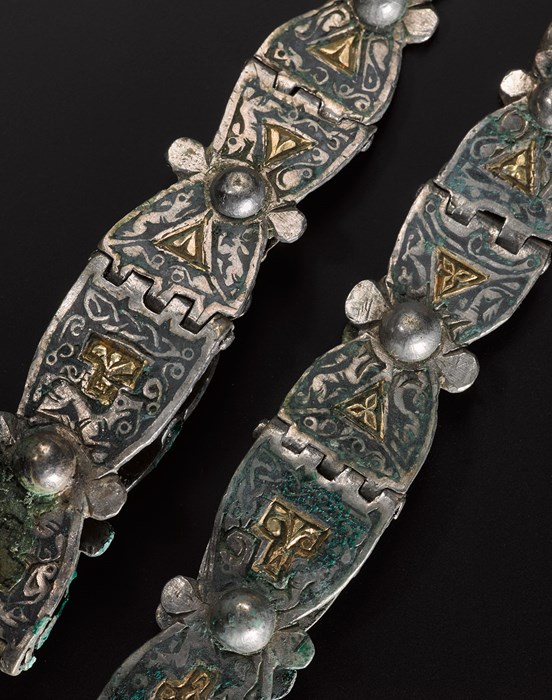 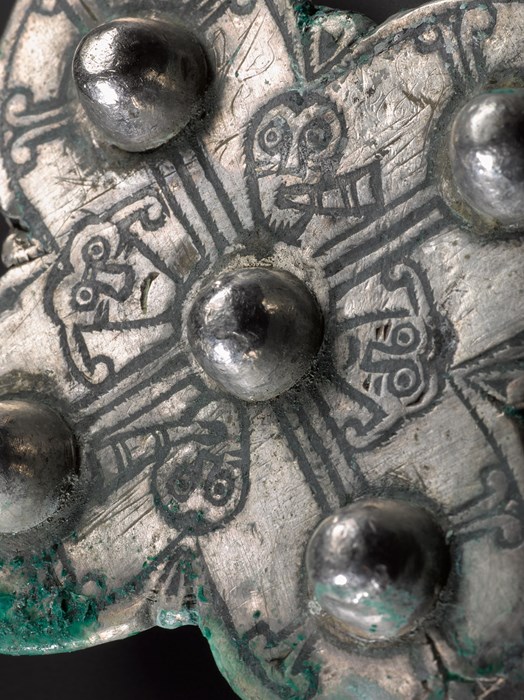 Above: A new type of Anglo-Saxon quatrefoil brooch. 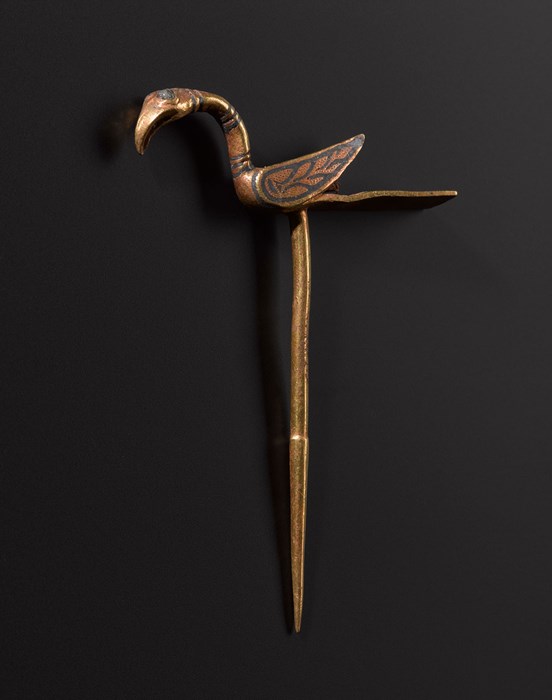 Above: This gold bird pin is unique.

What makes the Galloway Hoard unique?

Other finds from around Britain or Ireland have been exceptional for a single class of object—for example, silver brooches or armlets. But the Galloway Hoard brings together a stunning variety of objects in one discovery, hinting at hitherto unknown connections between people across Europe and beyond. It also contains objects which have never before been discovered in a hoard of this age, some of which are utterly unique.

Incredibly, textiles, leather and wooden fragments have also survived, providing an extremely rare opportunity to research and reveal many lost aspects of the Viking Age.

Who did the objects in the Hoard belong to? Where did they come from? Why were they buried? At the moment this is a mystery, but an integrated conservation and research programme can help find answers.

“
We like to think of objects as having lives… Our research will trace the stories of the objects back to when and where they were made, as well as why they were buried at that time and in that place. That range of stories will expand our knowledge of the Viking Age.
- Dr Martin Goldberg, Principal Curator of Medieval Archaeology and History

Why is the Hoard so important?

The runes inscribed on this armlet are not Scandinavian, as expected, but Anglian. Do they provide a clue to the people who hid the Hoard?

The Galloway Hoard transports us back to a critical moment in history: the formation of the political entities we now know as Scotland, England and Ireland.

At the start of the 10th century, Alfred the Great had succeeded in pushing back the Danes and his descendants had begun to lay the foundations of medieval England. Meanwhile, in the north, Alba – the foundation of medieval Scotland – was forming. With its central location within the British Isles, Galloway sat at the heart of these political developments and had close connections to Ireland. 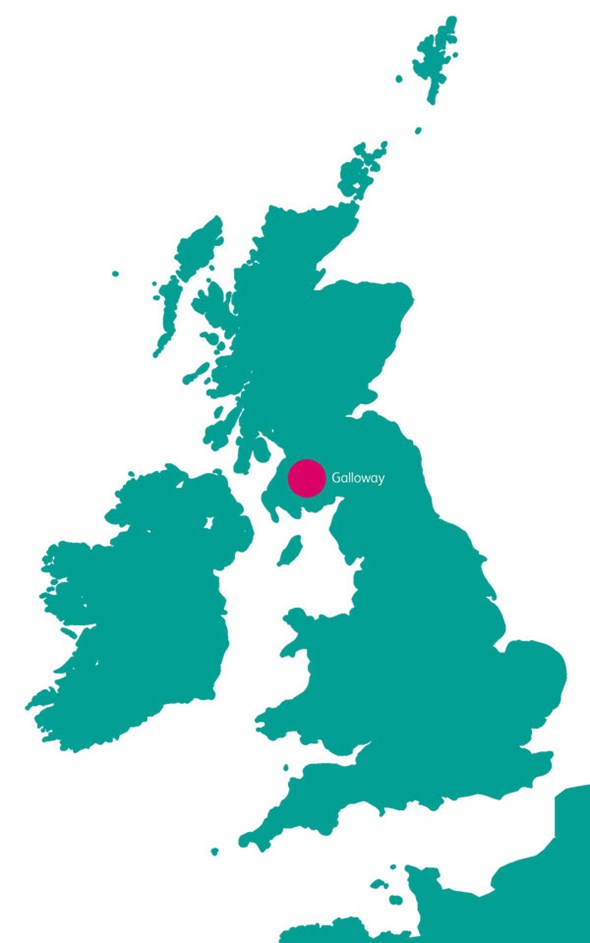 Above: Map of Britain and Ireland showing the location of Galloway, where the Hoard was discovered.

The secrets held within the Hoard will reveal new insights into a previously hidden history; to help imagine people from the past; to understand their stories through these amazing objects – and in doing so, to revisit our preconceptions about who we are and where we come from.

In the films below, Dr Martin Goldberg reveals a new insight into the arm rings found with the Hoard, which he discovered when he saw the treasure laid out together, and explains why the story of the Hoard is the story of the people who made, owned and buried it.

In this film, Martin Goldberg talks to Vikings writer Michael Hirst about the Hoard's potential to shed light on the 'Dark Ages'.

Who owned the Galloway Hoard?

Research into the Galloway Hoard has uncovered the name of one of the famous treasure’s original owners. Examination of Anglo-Saxon runic inscriptions on the Hoard’s silver arm-rings has revealed the name “Ecgbeorht” or, in its more modern form, Egbert. 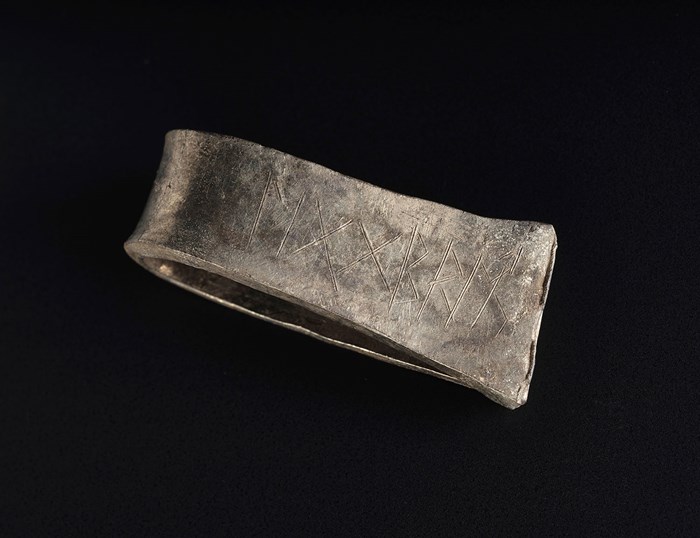 Egbert is a common Anglo-Saxon name, but with more research on the rest of the contents of the hoard, researchers will be able to narrow down its dating and suggest some candidates from the historical record.

The new insight comes from Dr David Parsons of the University of Wales, who presented his translation of the runic inscriptions as part of the next annual Whithorn Lecture at the Wigtown Book Festival on 5 October 2019.

Five of the silver arm-rings have runic inscriptions scratched into them which may have functioned as labels identifying distinct portions of the hoard, perhaps recording the names of the people who owned and buried them. Arm-rings of this sort are most commonly associated with Viking discoveries around the Irish Sea coastlands. Yet these runes are not of the familiar Scandinavian variety common around this date on the nearby Isle of Man, but of a distinctively Anglo-Saxon type.

This means that it is possible that the Galloway ‘Viking’ hoard may have been deposited by a people who considered themselves part of the English-speaking world. It is even possible that they were locals: Galloway had been part of Anglo-Saxon Northumbria since the early 8th century, and was referred to as the ‘Saxon coast’ in the Irish chronicles as late as the 10th century.

This tantalising new evidence is just a glimpse of how the Galloway Hoard will continue to transform our thinking on the ‘Viking Age’ in Scotland.

Further research into runic inscriptions will be part of the Glenmorangie Research Project.

What happens to the Hoard next?

This kind of Anglo-Saxon disc brooch has never been found in Scotland before.

During 2017, we ran a fundraising campaign to acquire the Galloway Hoard for the nation. Members, Patrons, supporters and major funders joined together to help us raise the £1.98 million required, and can now start the vital work to conserve the Hoard and unlock its secrets for future generations.

In December 2018 the Scottish Government announced funding to enable National Museums Scotland to tour an exhibition of the Galloway Hoard to museums across Scotland.

An exhibition of the Galloway Hoard will be displayed at the National Museum of Scotland and will thereafter tour to Kirkcudbright Galleries and Museum and Aberdeen Art Gallery.

The Scottish Government has provided £150,000 towards the tour and a national programme. This includes the conservation work currently being undertaken on the Hoard to enable it to tour, the sharing of digital assets, research outcomes and new educational resources related to the Viking-age material.

The Galloway Hoard was acquired with the support of the National Heritage Memorial Fund, the Art Fund, the Scottish Government and hundreds of generous individual supporters.