Who was Mary, Queen of Scots?

Arguably the most famous and controversial figure in Scottish history, Mary Stewart has become something of an enigma. Intrigue and romance have often obscured the hard facts of her life and reign.

The only daughter of the late James V of the ruling Stewart dynasty, Mary became Queen of Scots at only six days of age. She reigned from 1542 until her forced abdication in 1567. After 19 years as a prisoner of her cousin, Elizabeth I of England, Mary was executed on 8 February 1587.

Unlike Elizabeth, there was never any doubt that Mary would be a queen. Born in the middle of the momentous 16th century, Mary was to play her own significant part in this dramatic era. The expectation that she was born to rule extended to her burning ambition to be named as Elizabeth’s heir to the throne of England. This desire came to dominate Mary’s relationship with Elizabeth and, ultimately, it would prove to be a dangerous obsession which would bring about her death.

In my end is my beginning 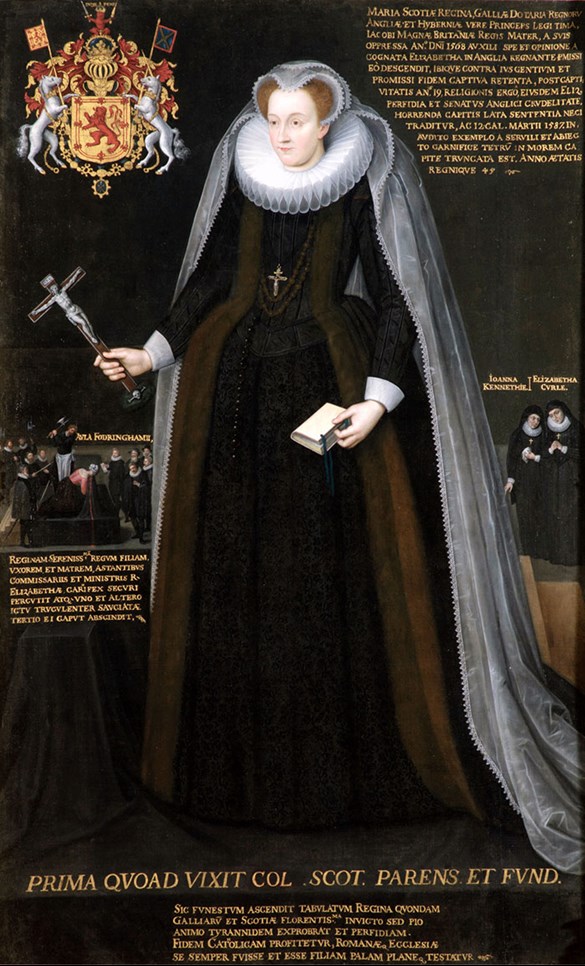 Above: The Blairs Memorial Portrait of Mary, Queen of Scots. One of the most iconic images of Mary, it was commissioned by Elizabeth Curle, one of Mary’s closest companions during the final years of her English captivity. It represents Mary in preparation for her Catholic martyrdom on the executioner’s block © Blairs Museum Trust

Towards the end of her life, during her time in captivity as Elizabeth’s prisoner, Mary embroidered the following epitaph-like motto: “In my end is my beginning”. This has proved to be somewhat prophetic. Even more than 400 years after her death, Mary’s legacy still provokes passionate and heated debate: was she a willing agent or a wronged victim in some of the more controversial episodes of her life?

Early-modern Europe was dominated by large dynastic monarchies which sought alliances with each other to further their power. Marriage was a key element in cementing these alliances, and Mary was no exception. Despite the fact that Scotland was the poorer relation of the major European powers, Mary was important dynastically. She was used as a marriage pawn, first with England and then, more successfully, with France.

Mary’s Europe was experiencing the great ferment of two far-reaching changes in society: the Renaissance, and the Reformation. The former had a huge impact on art, architecture, literature, philosophy and science, and mainly affected Europe’s literate elite, while the Reformation was a dramatic revolution in religion. These movements influenced not only everyday life, but also dramatically transformed European geopolitics. The continent was now divided into two hostile camps: Catholic and Protestant.

In Scotland, France and England, Mary was a contemporary of some of the most influential personalities of the Renaissance era. Along with Catherine de Medici, Mary Tudor, and Elizabeth I, Mary was one of a small group of women, Renaissance queens who – in an era still largely dominated by men – wielded considerable power. 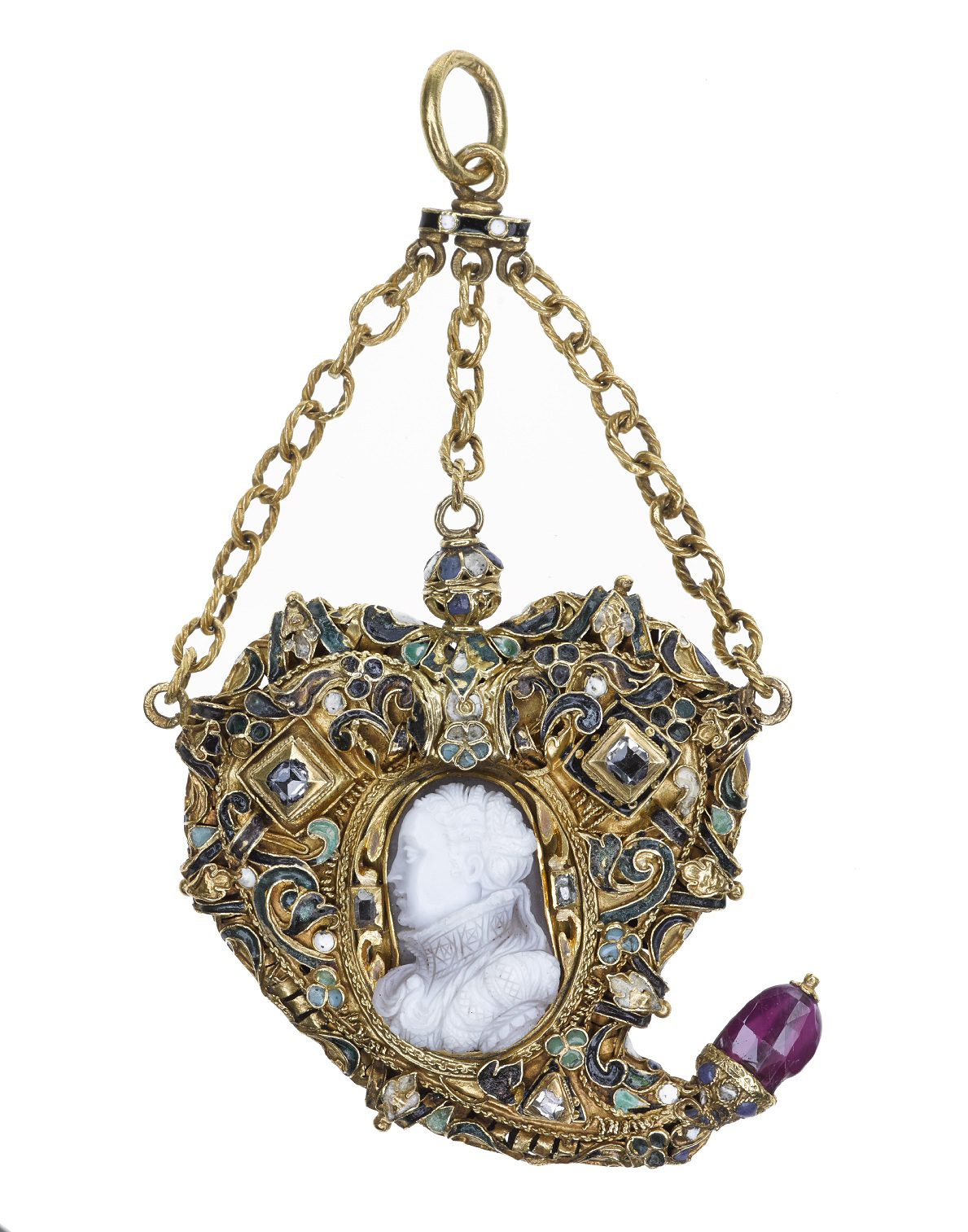 Above: Pendant, part of the Penicuik jewels, said to have been given to one of her supporters during her captivity, jewels being useful gifts to bind supporters to the Crown.

Mary was a striking woman who knew how to present an eye-catching and regal appearance. Tall, beautiful and graceful, with auburn hair and a fine, pale complexion, even one of her archenemies, the Protestant Reformer John Knox, described her features as “pleasing”.

Raised in one of the most sophisticated and glittering courts in Europe, she had access to the very latest Renaissance fashions. She loved fine clothing and amassed a sumptuous wardrobe of elegant and fashionable gowns and a spectacular collection of jewellery.

Jewels were essential currency for a 16th-century monarch: they displayed the majesty of monarchy and could be sold to raise cash to pay armies or debts. The gold necklace, locket and pendant, known collectively as the Penicuik jewels, are exquisite examples of some of the finest pieces of jewellery associated with Mary. 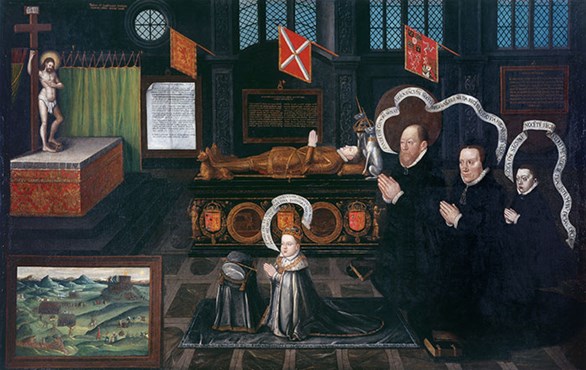 In the small hours of 10 February 1567 an enormous explosion destroyed the lodgings at Kirk o’ Field in which Darnley, Mary’s husband and King Consort, was staying. The bodies of Darnley and his servant were found in the rubble of the building. Darnley had been murdered in mysterious circumstances, and Mary herself was implicated in the plot.

The prime suspect was the man who was to become Mary’s third husband: James Hepburn, Earl of Bothwell. How Mary dealt with this incident sealed her fate.

These words of comfort were spoken by Mary to one of her servants as she faced execution. 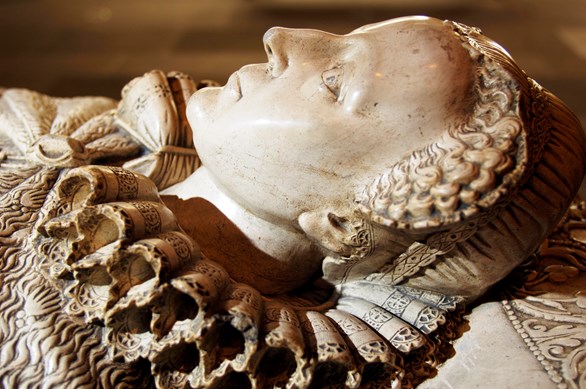 Above: Replica of the tomb of Mary, Queen of Scots.

In a sense Mary won through in the end; her son James VI of Scots became James I of England on the death of Elizabeth in 1603. Thus, every reigning British monarch since then has been descended from Mary, rather than from Elizabeth, who died childless. So perhaps we can indeed agree with Mary’s prophetic epitaph: “In my end is my beginning”.