Though unmarked, this ampulla was possibly made by James Denneistoun, a deacon of the Edinburgh Incorporation of Goldsmiths.

Charles I’s son Charles II was the last monarch to be crowned in Scotland. The ceremony took place at Scone, the ancient place of Scottish enthronement, in 1651.

Who was Charles I?

Charles I (19 November 1600 – 30 January 1649) was the son of James VI of Scotland and I of England. He ascended to the throne in 1625 and was crowned in England. However, the Scots insisted that he should also be crowned in his northern kingdom. The ceremony took place in Edinburgh, at the Palace of Holyroodhouse, on 18 June 1633, amid an elaborate and extravagant royal tour.

What was the ampulla used for?

Above: Gold ampulla used in the coronation of Charles I in 1633.

The ampulla held the oil with which the king was anointed. It was used along with the Honours of Scotland. This crown, sword and sceptre date from the late 15th and early 16th centuries, and were first brought together for the coronation service of the nine-month-old Mary, Queen of Scots, in 1543. However, while the Honours were hidden when civil war broke out, the ampulla seems to have remained in the possession of the Edinburgh Town Clerk who ordered it. 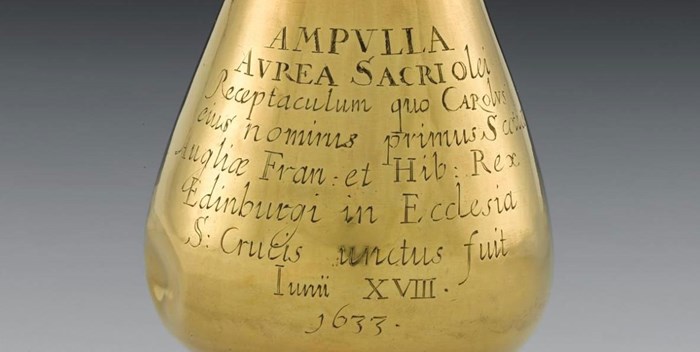 Above: The Latin inscription on the ampulla translates as ‘Golden Ampulla of Sacred oil the vessel with which Charles the first of that name King of Scotland, England, France and Ireland was anointed in the Church of the Holy Rood in Edinburgh, 18th June 1633.’

What is the significance of Charles I’s Scottish coronation?

In light of the future conflict between Charles and Scottish Presbyterianism, the coronation was a sign of things to come.

Charles I was determined to bring the Scottish church under the rule of bishops appointed by the crown, as in England. This Episcopalian system went against the set-up of the Scottish Presbyterian church, which was governed by elders and ministers, the latter were chosen by their own congregations.

The controversial Anglican coronation ceremony imposed by Charles was regarded as a propaganda exercise for his ‘high’ view of kingship and raised the hackles of the more Presbyterian of the king's subjects. Charles believed that the king had a divine right to rule, and that, as king, he was the spiritual Head of the Church. The Presbyterians, however, could not accept this: for them, Jesus Christ was the Head of the Church.

Five years later, in 1638, Scots across the country banded together in opposition to Charles I’s religious and political policies by signing the National Covenant, a pledge between the Scottish people and God to uphold Presbyterian values. Those who supported the National Covenant were known as Covenanters. You can find out more about the Covenanters in the story about Alexander Peden’s mask. 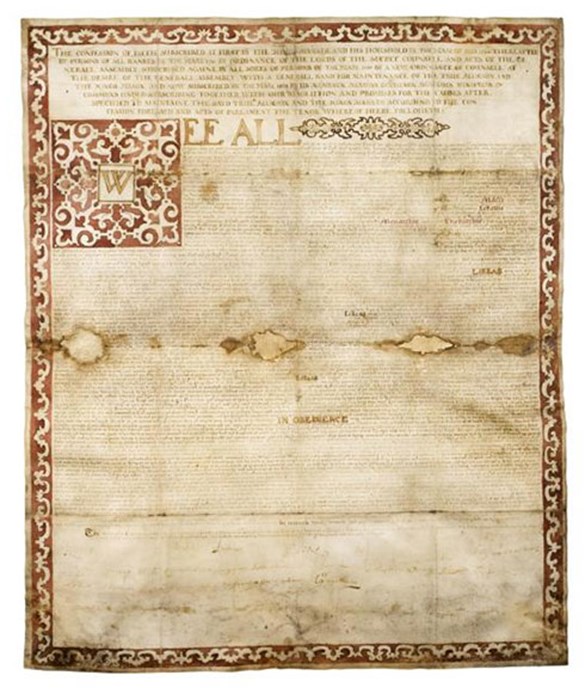 Above: The National Covenant can be seen in the Kingdom of the Scots gallery in the National Museum of Scotland.

You can find out more about the ampulla in this short film.

What happened to Charles I?

Charles’s belief in the divine right of kings would cost him dear. His struggles with Parliament resulted in civil war across England, Scotland and Ireland. In 1647, Charles was arrested by the Parliamentary forces under the command of Oliver Cromwell. Two years later he was tried and condemned to death.

In 1660, Charles I’s son Charles II was restored to the throne. He was succeeded by his brother, James VII of Scotland II of England. But in 1689 James was deposed. There then followed over half a century of attempts to reclaim the throne of Great Britain for the Stuart dynasty: the Jacobite challenge.

Above: Heart-shaped gold and enamelled pendant, c. 1650, containing a miniature of Charles I, a lock of his hair and a part of the blood-stained linen shirt he wore at his execution.