This dashing tartan frock coat may have been worn by Bonnie Prince Charlie, the 'Young Pretender', during his ill-fated time in Scotland.

As the son of the 'Old Pretender', James VII and II, Bonnie Prince Charlie was known as the 'Young Pretender'.

Who was Bonnie Prince Charlie? 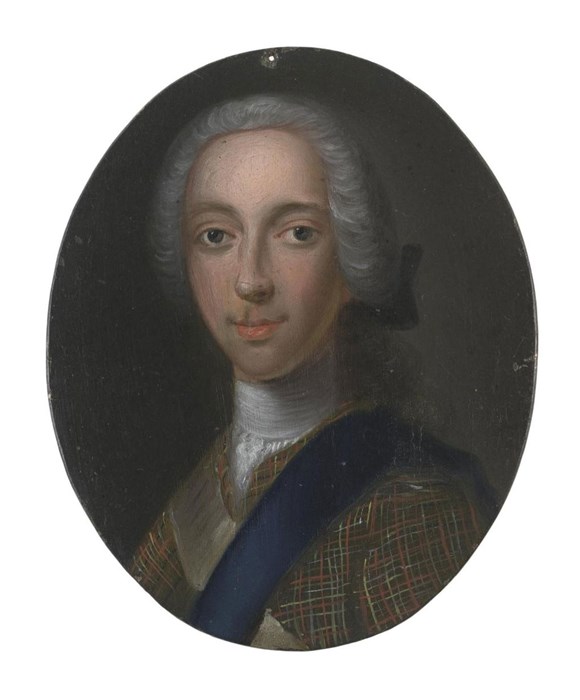 Above: Oval copper plate with a portrait of Prince Charles Edward Stewart in oils, 17th or 18th century.

Charles Edward Louis John Casimir Sylvester Maria Stuart, or Bonnie Prince Charlie as he became known, was born in Rome on 31 December 1720. He was the grandson of the deposed Catholic King James VII and II, who had fled to France from the Protestant William of Orange's invading army in 1688.

He came to Britain in 1745 as Prince Regent, to claim the three kingdoms for his father James VIII and III. Personable and energetic, the prince became the focus of the Jacobite cause. To the British government and its supporters, however, he was the Young Pretender, a rebel usurper.

This elegant tartan frock coat was in the possession of a Jacobite-supporting family for many years. The family had direct links with the prince and family provenance says it was understood to have worn by him during his time in Scotland.

Above: Tartan frock coat that may have been worn by Bonnie Prince Charlie.

In 1745, Bonnie Prince Charlie set sail from France and landed on the Isle of Eriskay in the Outer Hebrides on a campaign to reclaim the three kingdoms of Scotland, England and Ireland for his father James VIII and III – the ‘Old Pretender’. This challenge to restore the Stuart dynasty has become known as 'The Forty-Five'.

He raised his father’s Royal Standard at Glenfinnan on 19 August 1745 and gathered an army of several hundred men, mostly Highlanders.

By now, George I had been succeeded by his son George II and his government posted a £30,000 reward for Bonnie Prince Charlie’s capture. 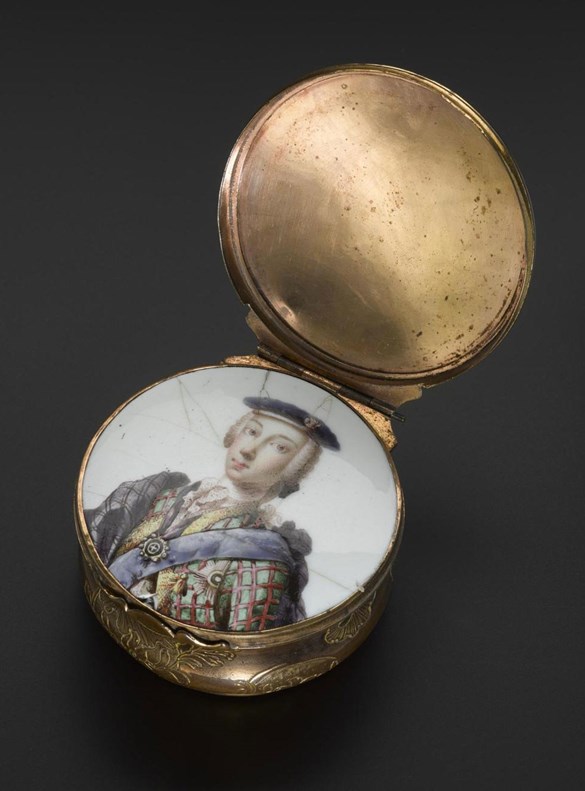 Above: Enamel portrait of Bonnie Prince Charlie on a snuff box. The portrait was concealed beneath the lid of the box.

Charles and his men marched south and seized Edinburgh – except for the traditional stronghold of the Castle. A cheering crowd of 20,000 greeted him on arrival, and for a few weeks he held court at the Palace of Holyroodhouse, conducting official business there while holding receptions and receiving visitors. 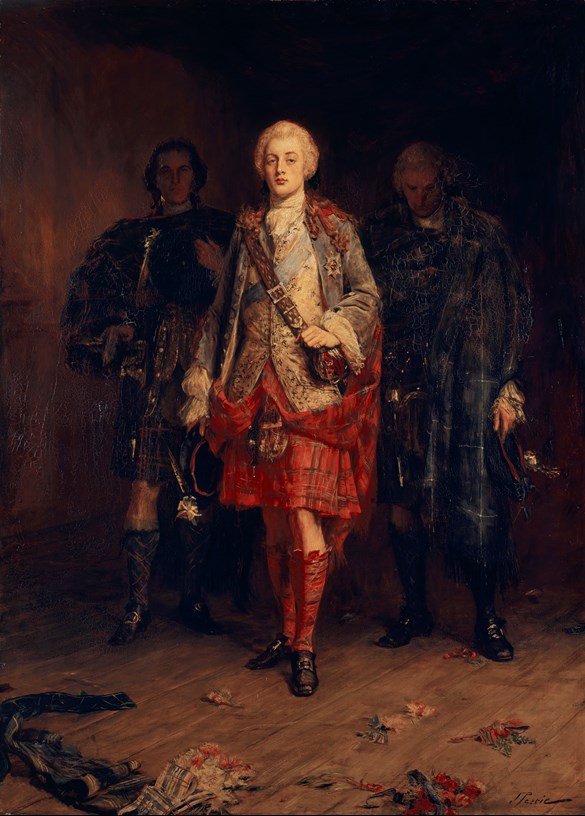 Above: Bonnie Prince Charlie Entering the Ballroom at Holyroodhouse by John Pettie, painted before 30 Apr 1892. The ball was a literary creation, described by Sir Walter Scott in his novel Waverley. You can find out more about the painting at the Royal Collection Trust website. Image Royal Collection Trust / © Her Majesty Queen Elizabeth II 2017.

Above: This cream silk gown was reputedly worn by Margaret Oliphant of Gask when she was received at the Palace of Holyroodhouse. It was probably adapted for the event.

On 21 September 1745 the Jacobites led by Bonnie Prince Charlie defeated Sir John Cope’s government forces at the Battle of Prestonpans in East Lothian. 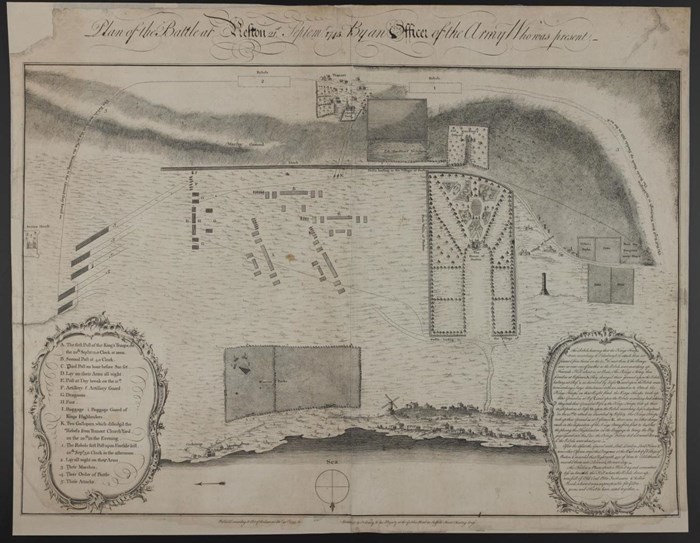 Above: Plan of the Battle at Prestonpans, by an Officer of the Army who was present.

Buoyed by victory, Charles and his army decided to march south to London in a bid to claim the British throne. After successfully laying siege to Carlisle, Charles and his army reached as far south as Derby, causing panic in London, before reluctantly retreating to Scotland on the advice of his commanders.

On 17 January 1746 Charles and his army achieved their last significant victory at the Battle of Falkirk, which resulted in the death of over 400 government troops.

After a failed attempt to capture Stirling Castle, the Jacobites withdrew to the Highlands and besieged Fort William. Following this, they retreated to Inverness where they captured the castle, then called Fort George.

But government forces, commanded by the Duke of Cumberland, were marching north. Time was running out for Bonnie Prince Charlie.