This sporran clasp, as worn by Rob Roy in Walter Scott's novel, hides a deadly secret: four concealed pistols. But who was this legendary folk hero, and what is his connection to the Jacobite challenge?

MacGregor's nickname Roy comes from Ruadh, which means red in Gaelic – a reference to his fiery red hair.

Who was Rob Roy MacGregor?

Rob Roy MacGregor was born in Glengyle, in Stirling, in 1671. In later life he became famous as an outlaw, the 'Scottish Robin Hood', but his association with the Jacobite cause began at an early age. 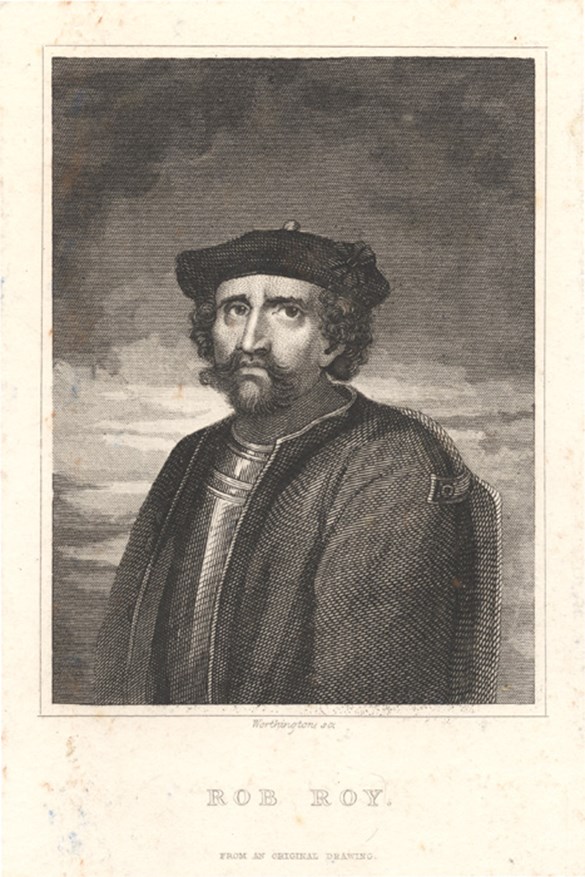 In 1689, at the age of just 18, Rob Roy, together with his father, joined the Jacobite challenge led by John Graham, 7th Laird of Claverhouse and 1st Viscount Dundee.

On 27 July 1689 the Battle of Killiecrankie was fought between Jacobites loyal to King James and troops supporting the Protestant King William.

The Jacobites won, but at a terrible cost – a third of their number were killed, including Dundee, who was fatally wounded during the Jacobite charge.

Less than a month later, on 21 August, the Battle of Dunkeld raged for over 16 hours and resulted in the tired Jacobites admitting defeat. 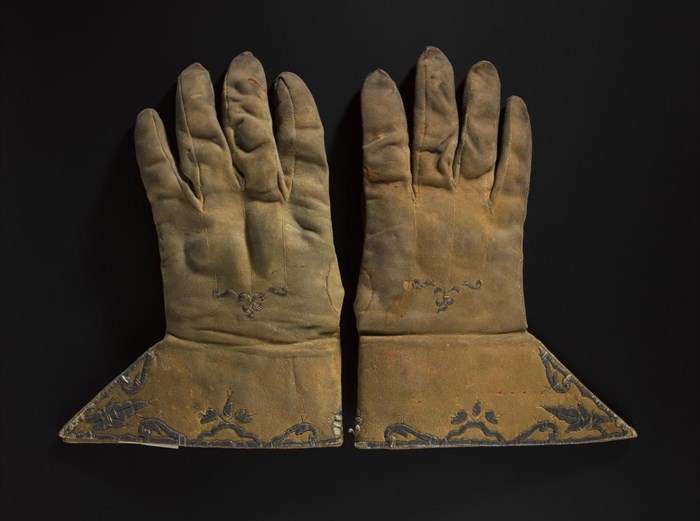 Above: Pair of gloves said to have been worn by John Graham of Claverhouse, Viscount Dundee. Leather, silver wire, 17th century.

In Sir Walter Scott’s novel Rob Roy, MacGregor was portrayed as a principled thief forced into cattle stealing. The real Rob Roy MacGregor was a notorious cattle thief and extortionist who ran a lucrative protection racket. In 1712 a deal with the Duke of Montrose went badly wrong and MacGregor was outlawed. 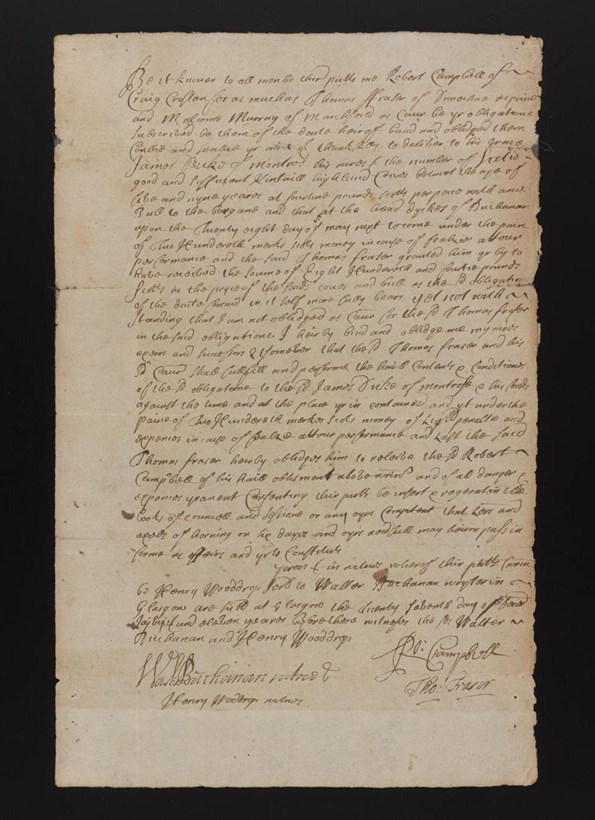 Above: Obligation by Rob Roy to deliver to James, Duke of Montrose, 60 Highland cows and a bull at ‘fourteen pounds Scotts per piece with ane bull to the bargane.’

Rob Roy and the 1715 challenge

During the 1715 rising, the Duke of Argyll commanded the government troops in Scotland. Rob Roy had been in league with Argyll, an enemy of Montrose. With his loyalties divided, Rob Roy is said to have been an onlooker at the Battle of Sheriffmuir rather than a participant. 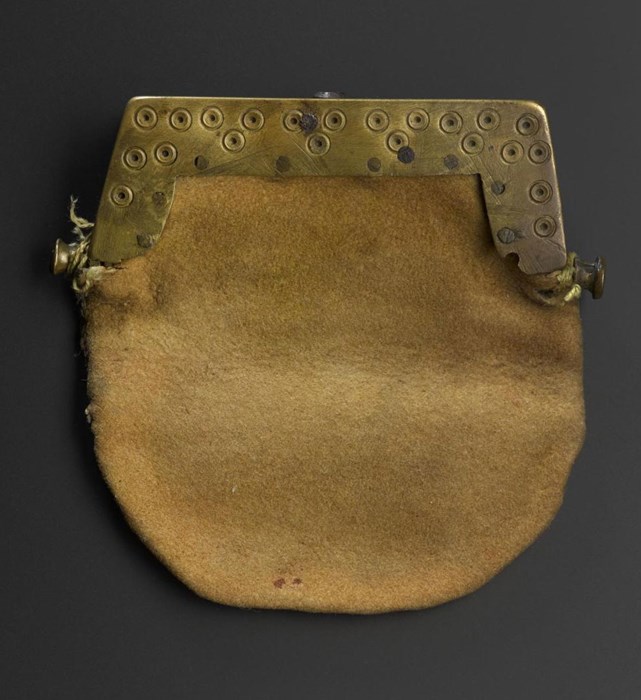 Above: Small purse of deerskin with a rectangular brass clasp incised with dot-and-circle ornament, said to have been owned by Rob Roy MacGregor. Perthshire, 18th century.

Rob Roy and the 1719 challenge

In 1719, James VII's son James VIII attempted another challenge to gain the throne, this time supported by Spain. The Jacobite army clashed with Government forces at Glen Shiel, where they were defeated. Rob Roy took part in the battle, and was badly wounded. 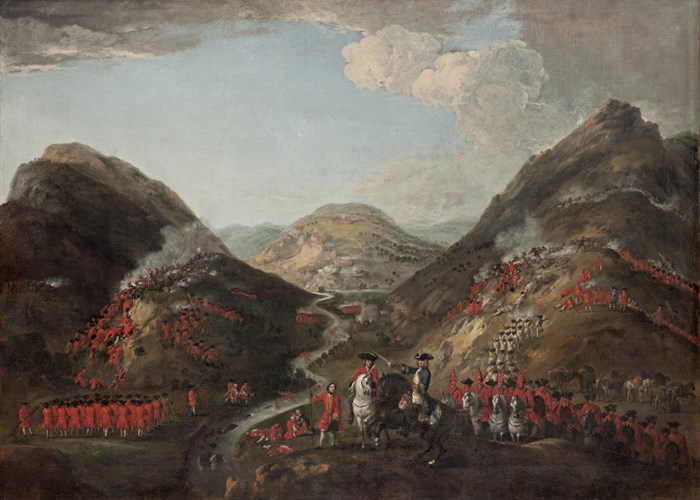 Above: Peter Tillemans. The Battle of Glenshiel 1719. Figures probably include Lord George Murray, c 1700 - 1760; Rob Roy MacGregor, 1671 - 1734; and General Joseph Wightman, d. 1722. The National Galleries of Scotland. You can find out more about the painting at the National Galleries website.

Rob Roy was eventually arrested in 1722, but was pardoned five years later by George I, saved in the nick of time from being transported as a prisoner to Barbados.

He died at his home in Balquidder, in Stirling, at the age of 63.

Rob Roy became a legend in his own life time when author Daniel Defoe published a fictionalised account of his life, The Highland Rogue, in 1723. His resulting popularity may have influenced the decision to pardon him.

His fame increased when Sir Walter Scott published his novel Rob Roy in 1817, and he has continued to be a popular figure on stage and screen ever since.

Above: Sporran clasp of brass and steel with four concealed pistols which would fire if the sporran was not opened correctly. This may have inspired an episode in Sir Walter Scott's novel Rob Roy where the hero's sporran opens by twisting 'one button in one direction, another in another... [when] the mouth of the purse... opened... a small steel pistol was concealed within the mounting... so that the weapon would... [when tampered with]... discharge.'