This targe, or shield, was presented to Prince Charles Edward Stuart before Culloden, but abandoned when the Prince fled the field after the Jacobites were defeated.

Wooden boards covered with pigskin and backed with jaguar skin, with silver mounts

The figure in the centre of the targe is the gorgon Medusa, the mythological monster whose gaze turned people to stone. 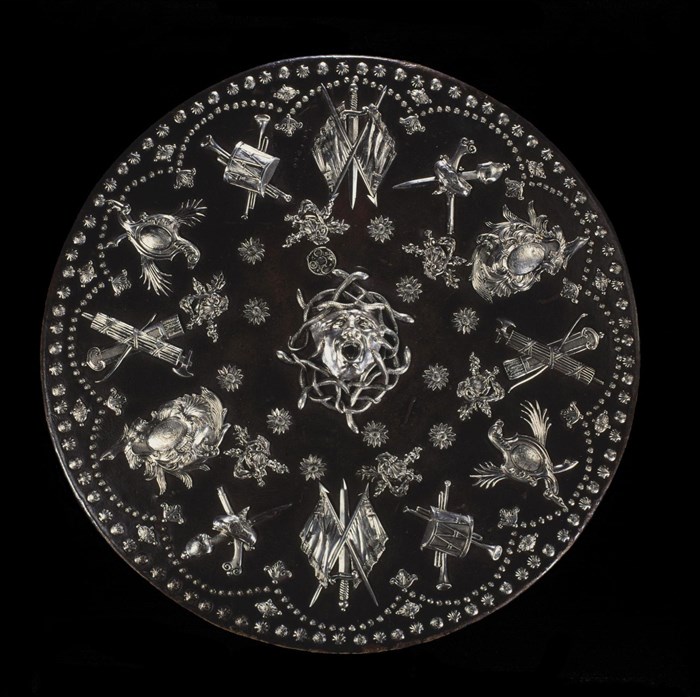 Above: Dress targe, part of the accoutrements presented to Prince Charles Edward Stuart by James, 3rd Duke of Perth.

Drummond's gift was intended to encourage support from the Highland clans and it was no coincidence that Charles adopted Highland dress when he landed in Scotland five years later.

These are exceptional examples of typical Highland weapons, clearly intended as symbols of power and status.

This targe is constructed in the traditional way with wooden boards covered with pigskin. Less traditionally the back of the targe is covered in jaguar skin, while the front has been elaborately decorated with silver mounts. The central boss is a Medusa head, a mythological monster. Other decoration included flags with thistles, cartouches with emblems referring to a Jacobite victory, and Scots bonnets. The cap badges of the bonnets are engraved with the crest and motto of the 3rd Duke of Perth and the St Andrew badge. 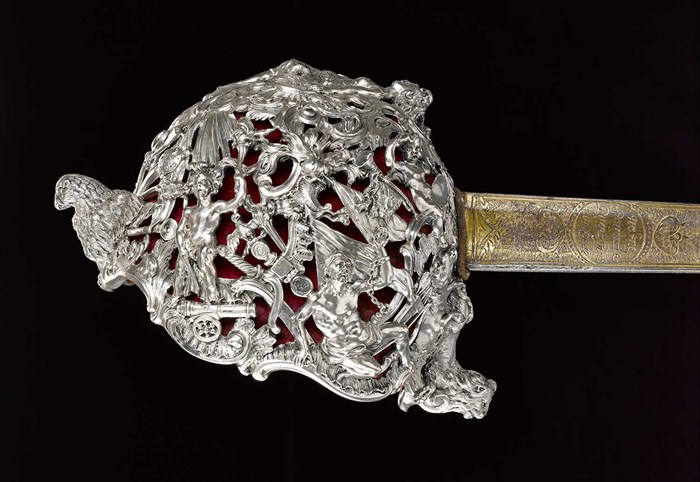 The basket hilt of this backsword has been made from a piece of cast silver. It is decorated with figures of warriors, one which is mounted and in classical armour. A naked boy beats a drum, and there is a prisoner and a figure of a woman as a symbol of war. The wrist guard is in the form of a crouching lion and the pommel is formed as a horned owl. The blade is engraved with two mottos in French, 'Draw me not without reason' and 'Sheath me not without honour'. On each side there is a figure of a man in armour holding a sword, above which is the name 'hanniball'. Despite all of these warlike motifs the sword was never drawn in anger.

What happened to the targe and sword after the battle?

Both objects have associations with the recovery of the Prince Charles Edward Stuart's belongings from the baggage train in the immediate aftermath of the Battle of Culloden. The backsword was presented to the chief and captain of Clanranald by George IV in 1820. Clanranald often appeared at court in Highland dress and George declared that 'he was happy to see you in that dress', believing that Clanranald was the 'person best' to bear the prince's sword. The targe was probably rescued from Culloden by Jacobite clan chief, Ewan MacPherson of Cluny. 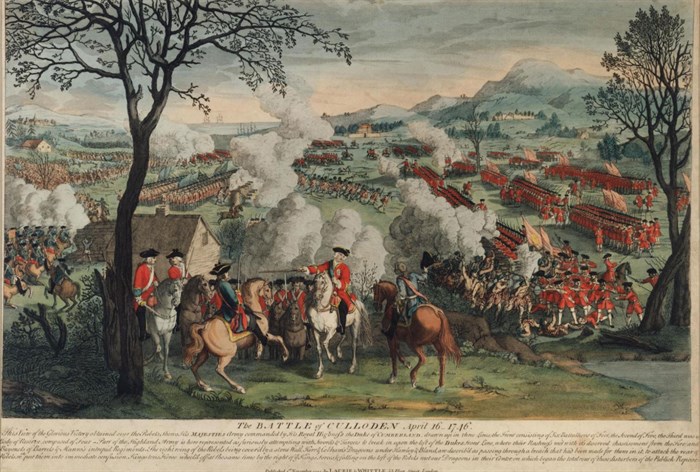 Above: Framed, coloured print of the Battle of Culloden, published by Laurie and Whittle, 1797.

Who was James, 3rd Duke of Perth?

James Drummond, the 6th Earl and 3rd Duke of Perth, joined Prince Charles in September 1745 after escaping arrest for his Jacobite sympathies. Described as ‘bold as a lion in the field of battle’, he led the successful siege of Carlisle and commanded the left wing of the Jacobite army at the Battle of Culloden. After the rout, he escaped by ship to France, but died on board before reaching safety.

You can find out more about the targe and backsword in this short film.

What happened to Bonnie Prince Charlie after Culloden?

When Prince Charles escaped from the battlefield at Culloden, he left almost all his personal possessions behind. During the months that followed he was hunted by government forces throughout the western Highlands and Isles. He was helped by many loyal followers, and this period gave rise to some of the most enduring myths of the rising.

He was sheltered, smuggled from hiding place to hiding place, and given clothes and other items, by Gaels who risked their own safety to help him. 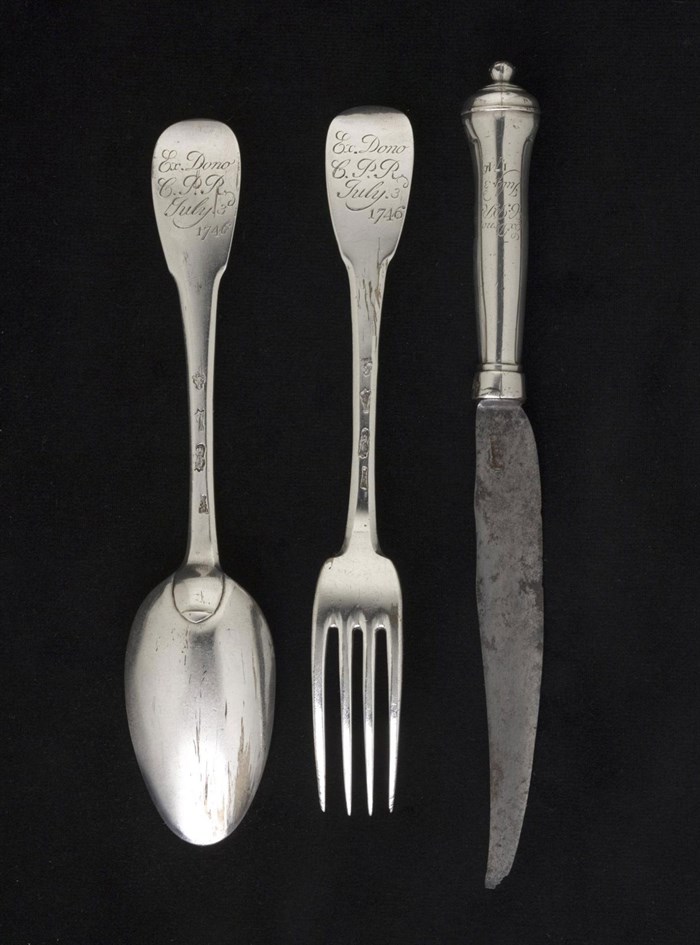 Above: Silver cutlery given by MacDonald of Clanranald to Prince Charles Edward Stuart after the defeat at Culloden when he was hiding on his lands in Benbecula.

Charles eventually escaped to France and then Rome. Many of his followers were captured and some executed. Others were forced into exile and had their lands forfeited. The government was determined to eliminate the Jacobite cause once and for all.

The Highlands were disarmed and even highland dress was banned for a time. The breakdown of the clan system accelerated, while improved roads and forts led to more effective government control of remoter areas. 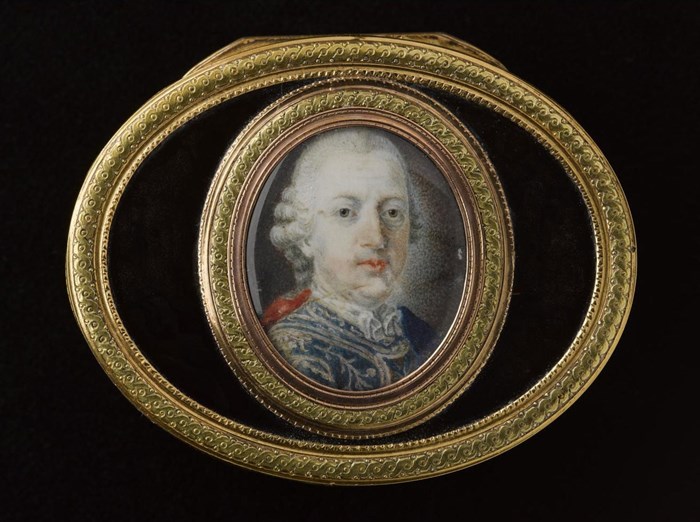 Above: Snuffbox of dark tortoise-shell, with a miniature of Prince Charles Edward Stuart on the lid, said to have been painted at Rome in 1776, when the Prince was 56.

Prince Charles did not return. He died a broken man, deserted by his wife and followers, in Rome on 31 January 1788.

By this time, the threat of an armed Jacobite insurrection was unthinkable. The cause soon became the subject of romantic nostalgia, expressed through poetry and song as well as objects and relics. Several mementoes of the Prince came into the museum collection before his death.

As it continues to fuel the imagination through film and television, the Jacobite cause may have been lost, but it has not been forgotten.