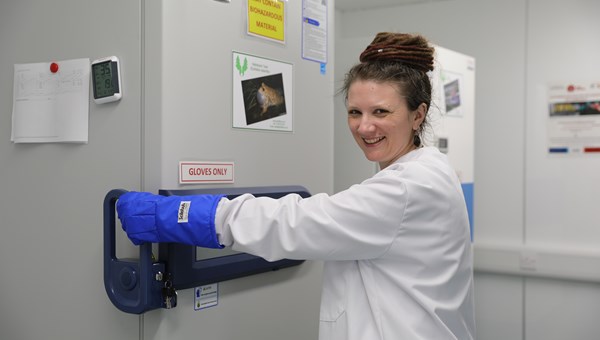 Gill Murray-Dickson is a Biobank Research Fellow with the BBSRC funded CryoArks initiative.

Dr Murray-Dickson has a background in research and the application of population genetic analysis to inform conservation management of rare and endangered species.

She completed her PhD at the University of Aberdeen in 2011, examining population genetic structure of neutral and adaptive DNA markers in the palmate newt. She later worked at the RZSS WildGenes laboratory, where she collaborated closely with members of the European Association of Zoos and Aquaria (EAZA) community.

Now based at the National Museums Collection Centre, Gill is working as a Biobank Research Fellow with the BBSRC funded CryoArks initiative. She is coordinating biobanking activities at NMS in conjunction with CryoArks partners and the EAZA biobank UK hub at RZSS Edinburgh zoo.