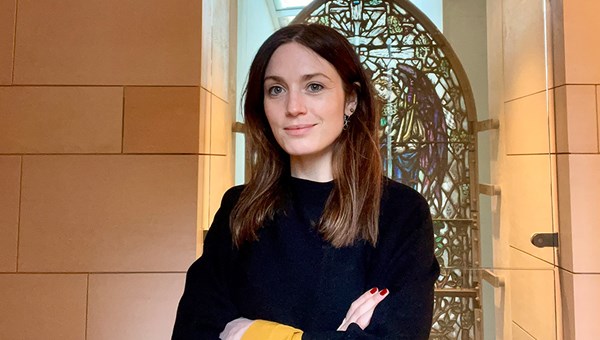 Dr Sarah Laurenson
Senior Curator of Modern and Contemporary History.
Responsible for: Contemporary collecting; twentieth and twenty-first century Scottish collections; Scottish jewellery from 1750 to the present day.
Research interests: Contemporary collecting and the history of collecting; the relationship between material culture and the Scottish landscape; cultures, identities and industries in the Highlands and Islands; Scottish decorative arts, and the historical development of craft skill.
E: s.laurenson@nms.ac.uk

Sarah is responsible for the Scottish history collections from the late-twentieth century to the present day, and for the post-1750 Scottish jewellery collections. Sarah leads the department's contemporary collecting programme, focused on documenting the impact of social, cultural, political and environmental change in twenty-first century Scotland. There is a strong emphasis on collecting material to represent what is distinctive about Scotland today in a global context, mindful of the differences within and across the country. Another key focus of contemporary collecting is on objects embedded with a sense of place, and on objects which link to existing collections to reflect how the past continually shapes the present. Sarah is Chair of the National Museums Scotland Contemporary Collecting Working Group.

Sarah's broad research interests span the period of Scottish history from 1750 with a particular focus on Scottish identities, and on the the ways in which shifting cultural engagement with the landscape and environment has shaped – and continues to shape – the material world. Her doctoral thesis from the University of Edinburgh, funded by The Leverhulme Trust, examined Scotland’s jewellery craft from 1780 to 1914. Her forthcoming book expands on this research with particular attention to the evolving nature of the jewellers’ skill, to the ways in which pre-historic and Medieval objects were replicated and re-interpreted in the modern period, and to the relationship between the development of geological knowledge and cultural production across rural and urban areas. Other aspects of Sarah’s recent research include: the relationship between people, objects and environments in the Highlands and Islands, and the material culture and contemporary legacies of Scotland's colonial histories. In 2018-19 Sarah was co-Investigator on the project, The Matter of Slavery in Scotland, funded by the Royal Society of Edinburgh.

Sarah supervises the research of doctoral student Laura Scobie on the material culture of Scottish whisky, a Collaborative Doctoral Project (CDP) funded by the AHRC, in partnership with the University of Edinburgh. She is about to launch another of these CDP projects, this time focused on Gaelic material cultures, with Sabhal Mòr Ostaig, University of the Highlands and Islands: ‘Cultar Dùthchasach: Materialising Gaelic Cultures in 21st-Century Scotland’.

Sarah Laurenson Material landscapes: the production and consumption of men’s jewellery during the Scottish gold rush of 1869, History of Retailing and Consumption 2:2 (July, 2016).