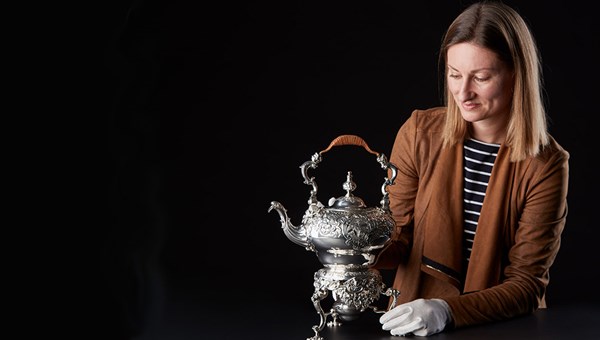 Lyndsay McGill
Curator, Renaissance and Early Modern History
Responsible for: Collections from the early Stuart kings to the Enlightenment including: applied arts, numismatics, horology as well as objects surrounding Mary Queen of Scots, the Jacobites and the Scottish church post 1560.
Research interests: Silver and jewellery, Scottish goldsmiths, clocks and their makers, the history and insignia of the Order of the Thistle pre-1750, and Scottish heritage.
E: l.mcgill@nms.ac.uk

Lyndsay McGill is Curator of Renaissance and Early Modern History.

In 2012 she became a Curator for the National Trust for Scotland with responsibilities for the interiors and collections of several properties including Culzean, Brodick and Craigievar castles, as well as smaller properties like Charles Rennie Mackintosh’s Hillhouse and Canna House on the Island of Canna.

In 2014, Lyndsay returned to the National Museum as Curator of the Renaissance & Early Modern Scottish collections. She continues to develop her interest in silver particularly focusing on objects that are of a uniquely Scottish design such as quaichs, and silver items made by Scottish goldsmiths in Jamaica during the 18th century.

Recently, she has expanded her research into jewellery, notably Renaissance jewels and Scottish heart brooches. She is part of a supervisory team for an AHRC Collaborative Doctoral Award looking at dress accessories from 1100 to 1500.

Lyndsay is particularly fascinated by the tangible legacy of humankind and is currently studying Scottish Heritage at the University of Highlands & Islands. She is also a curatorial adviser on Scottish applied art for the National Trust for Scotland, a nominated Museum Accreditation Mentor for Museum Galleries Scotland, and a Trustee of the Scottish Historical Review Trust.