You are here Home > Collections & Research > Collections departments > Scottish History and Archaeology department > Projects > Glenmorangie Research Project into Early Medieval Scotland
From the Picts to the Viking Age, the early medieval period was a time of great creativity, from which the kingdom of Scotland was born.

The Early Medieval period (around AD 300 – 1100) was a time of radical change, new identities and consequential transformations. This era saw the rise and fall of the Picts, the introduction of Christianity, the expansion of Gaelic and the onset of Viking invasions. The result was the earliest political entity known as ‘Scotland’ by the twelfth century. And yet it is not a well-known period of Scotland’s history.

Beautiful and sophisticated objects, sculptured stones, and manuscripts were produced in Scotland during this time, and through The Glenmorangie Research Project, we are able to uncover their stories and share them like never before.

One of the most important legacies of the Glenmorangie Research Project was capturing brand new photography of hundreds of objects in the Early Medieval collections.

Bringing the past to life

The Glenmorangie Research Project has always promoted a creative approach to the past, and from its inception has invited collaboration with leading artists and craftspeople. Over the course of the project we commissioned 7 object recreations of various kinds, from objects which don’t survive such as the wooden Pictish throne, to objects which survive in part, like drinking horns and leather satchels. Find out more about our Creative Spirit object recreations. 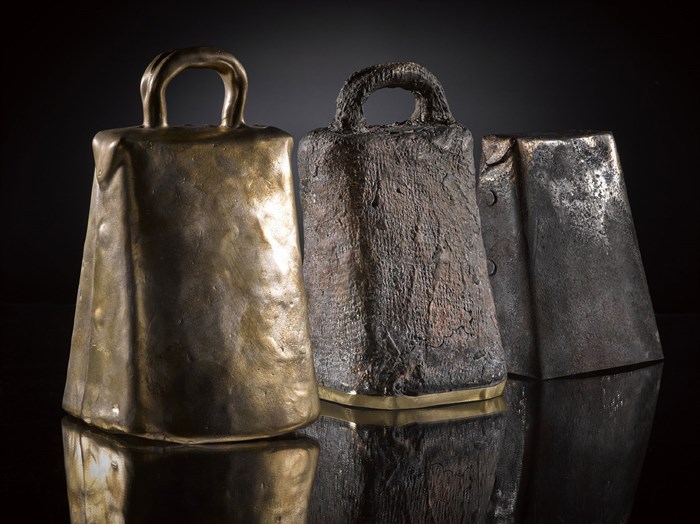 Hand-bells made from a wrought iron sheet folded and riveted together, then covered inside and outside with bronze.

Throughout the course of the project we hosted a series of Glenmorangie Annual Lectures with leading artists and makers. You can catch up with lectures by Andy Goldsworthy, Cornelia Parker and Malcolm Appleby.

The Glenmorangie Research Project also mounted two exhibitions. Creative Spirit, 2013-14, was a showcase of several recreated objects from the second phase of the project. Scotland’s Early Silver was the result of the third phase of the project, along with the accompanying book. The exhibition started in the National Museum of Scotland in 2017-18 and went on a national tour to Museum nan Eiliean, Stornoway; Kirkcudbright Galleries, and Duff House, Banff (2018-19). The exhibition can still be explored through a series of films made by the curators, or through the online exhibition.

Throughout the lifetime of the Project, the Glenmorangie Research Fellows and curators have also produced a variety of online resources, including spotlight blog posts and more detailed collections stories.

Thanks to The Glenmorangie Company’s support, National Museums Scotland has been able to undertake ground-breaking research on this fascinating period of Scotland’s early history.