The Hilton of Cadboll stone was carved around AD 800 in northern Scotland, then a heartland of the Picts.

The vicinity of the village of Hilton of Cadboll, in Ross and Cromarty, northern Scotland

In 1998 the sculptor Barry Grove was commissioned to carve a modern reconstruction of the Hilton of Cadboll slab, which was unveiled near where the original stone was found, at the edge of the village of Hilton.

The Hilton of Cadboll stone was carved around AD 800 in northern Scotland, then a heartland of the Picts.

At this time Scotland was becoming Christian and sculptured stones were created to celebrate the new religion. Carved from local sandstone, it displays sophisticated artistry and symbolism.

At some point the stone was toppled and broken, possibly in a storm in 1674, and the bottom portion lost. In 1676 the original carving of the Christian cross was chipped off and replaced with an inscription commemorating a local man, Alexander Duff, and his three wives. 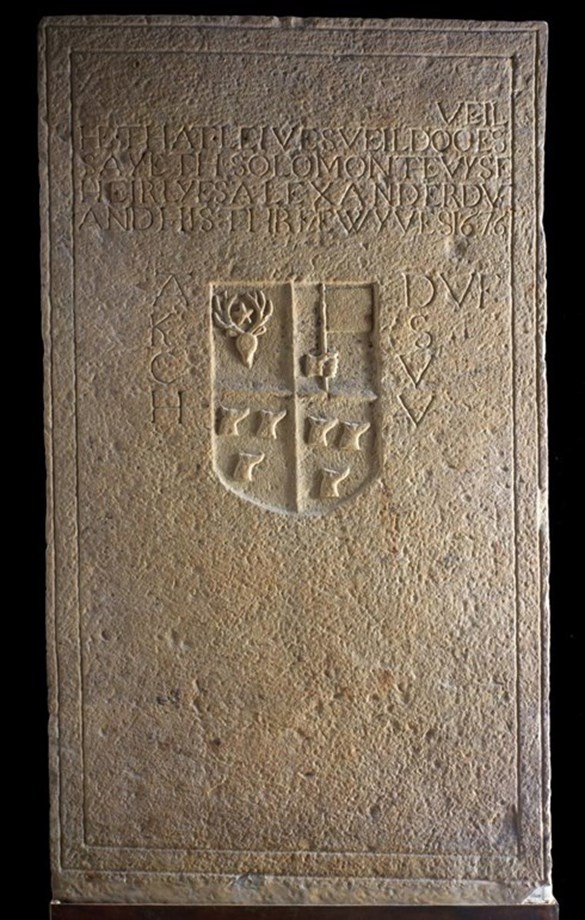 From the 17th to the mid 19th centuries, the stone remained by the chapel at Hilton of Cadboll. For much of this time it lay with the original Pictish carving facing down.

In the 1860s the MacLeods of Cadboll took it to Invergordon Castle and installed it as a garden ornament.

When the MacLeods sold Invergordon Castle in 1921 they gave the stone to the British Museum in London. This led to public outcry, so the stone was returned to Scotland, arriving at the Museum of Antiquities in Edinburgh later that year. In 1995 the stone was moved to its current prominent position in the Early People gallery.

The symbols at the top of this slab are found on many other carved stones from eastern and northern Scotland. The Hilton of Cadboll slab features some of the most elaborate and intricately decorated examples of these symbols.

Pictish symbols are unique to Early Historic Scotland and their meaning is the source of much speculation. If they were part of a language like Egyptian hieroglyphs, they remain indecipherable.

Pictish symbols are also found on stones that do not feature any Christian imagery, on high status jewellery, and on smaller stone and bone objects. Examples of these symbols can be seen in the ‘Glimpses of the Sacred’ section of the Early People gallery.

The middle panel can be interpreted as an aristocratic hunting scene. At the bottom of the panel, a deer is being chased by two large dogs and two armed horsemen. Above this a person is shown sitting sideways on a horse, with glimpses of a second rider behind them. To the right are two trumpeters blowing long horns. 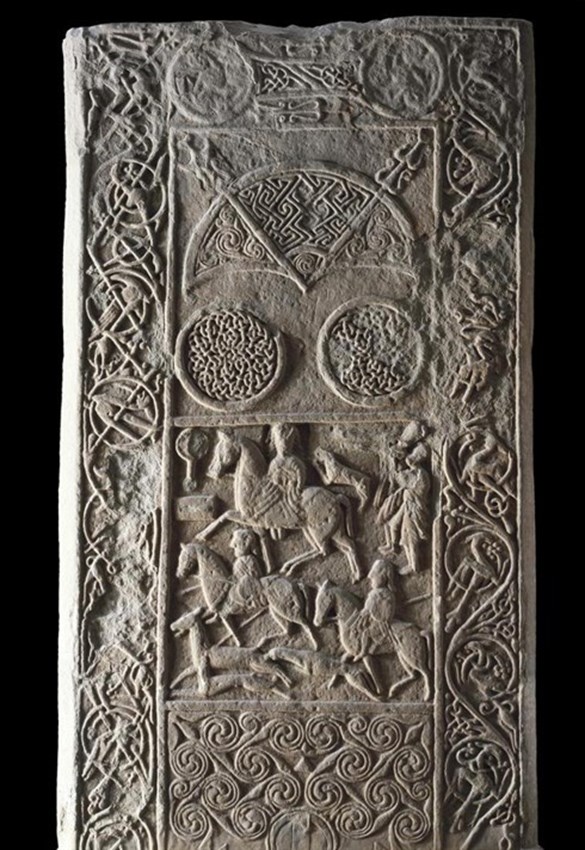 Above: The hunting scene on the front of the stone.

The central character has been interpreted as an important woman, perhaps someone that people would have recognised when the stone was carved. The mirror and comb in the top left hand corner are Pictish symbols traditionally associated with women.

Special care has been taken to add detail to the carving of this person’s robes and hair. She also wears a large brooch: surviving examples such as the Hunterston brooch emphasise how elaborate and prestigious these objects could be.

This hunting scene may illustrate the leisurely lifestyle of the elite members of society who commissioned the carving of this stone. However, in Christian art the hunt could also represent religious conversion and the salvation of the soul, and so a double meaning of this scene is possible.

The main rider is shown sitting sideways on a horse. Important people are sometimes shown facing towards the viewer, but in Christian art the Virgin Mary and Jesus are both depicted riding in this unusual way. The Hilton of Cadboll stone might be drawing on this important Christian imagery.