Gold object of the week No. 8

This week we are featuring two rare Late Bronze Age gold-bound bronze spearheads, found just 20km apart in Angus, near Dundee. Each formed part of a deposit of valuable possessions. One was discovered in 2016 during GUARD Archaeology’s excavations at Carnoustie, in advance of the construction of two football pitches for Angus Council, while the other had been found in 1963 at Pyotdykes, turned up by a plough (Coles et al. 1964). While the Carnoustie finds were being forensically examined as part of the specialist post-excavation work undertaken for GUARD Archaeology, we took the opportunity to study the Pyotdykes finds as well, and we thank Christina Donald of The McManus: Dundee’s Art Gallery and Museum for lending them to us.

The Carnoustie spearhead (length: 378 mm), after conservation. The dark green area has been coated with consolidant. Photo © GUARD Archaeology.

Even though the spearheads differ slightly from each other in their design, each had had its socket embellished with a band of gold foil. The Carnoustie band is decorated with a herringbone design between zones of two to three concentric lines, while the one from Pyotdykes has a more elaborate scheme featuring filled triangles between zones of up to seven lines. Under the microscope and ‒ in the case of Carnoustie ‒ thanks to CT-scanning, it was possible to see that in each case, the design had been either cast or (more probably) incised into the end of the bronze socket, and then a seamless hoop of thin gold foil was slipped over the end and pressed in, to take the design. A tool had been used to help the gold sink into the design.

Detail of the gold binding on the Carnoustie spearhead. Photo on left by Will Murray; on right, by Alison Sheridan. 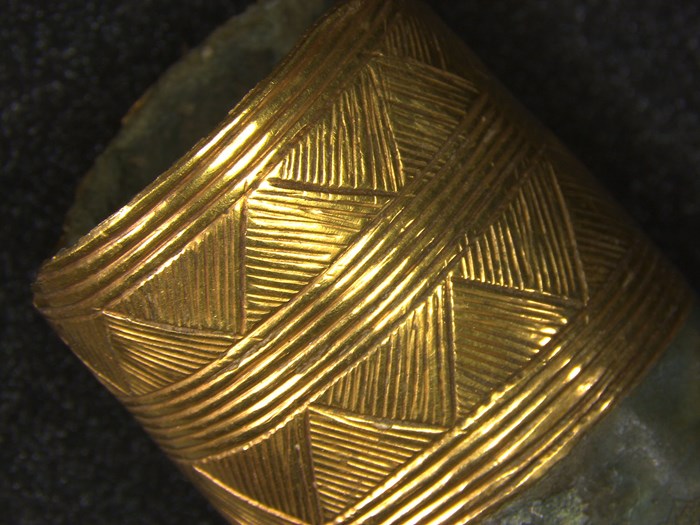 The decoration on the Pyotdykes gold binding. Photo by Lore Troalen. 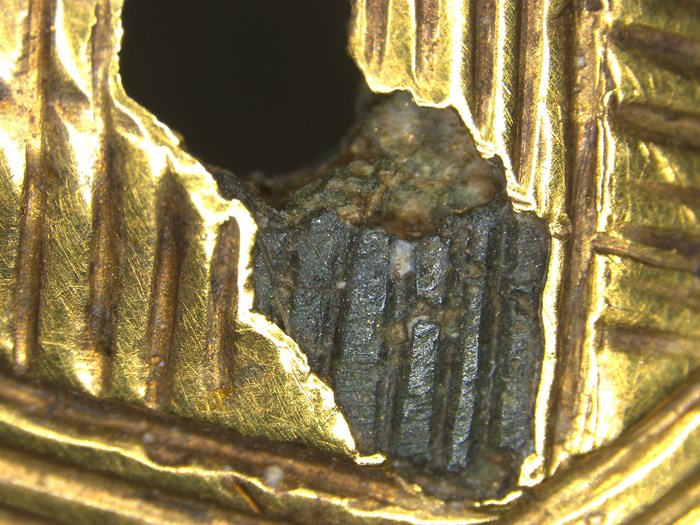 Detail of the Pyotdykes decoration, showing how the design is present on the underlying bronze. Photo by Lore Troalen. 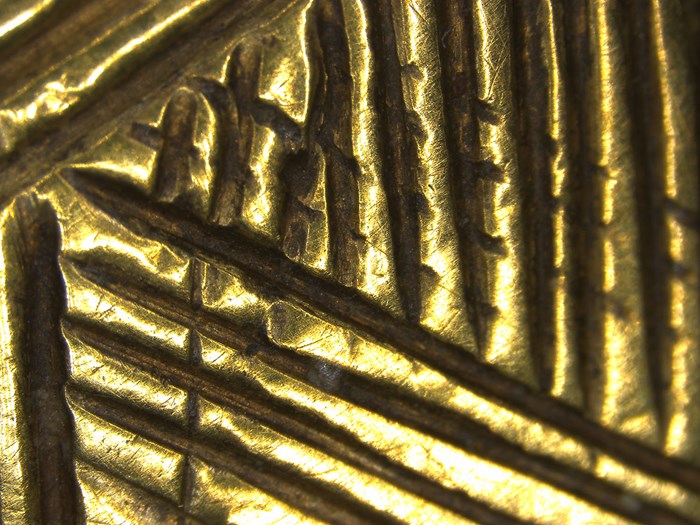 Detail of the Pyotdykes decoration, showing how a tool had been used to push the gold into the underlying design. There are also what look to be errors in the design: extra lines that don’t fit in with the overall pattern. Photo by Lore Troalen.

The composition of the gold on each of the spearheads was analysed by Dr Lore Troalen at National Museums Scotland using X-ray fluorescence spectrometry. The gold was found to be of high purity, with the Pyotdykes example being around 80% gold, around 10% copper and around 9% silver, for example. The Carnoustie gold was also analysed using lead isotope analysis at the NERC Isotope Geosciences Laboratory, Keyworth, and this showed that it could not have been made from Scottish gold. A source in Cornwall or possibly even southern Ireland seems likely.

While many Late Bronze Age spearheads have been found, and while a few have decoration on their sockets or blades, there are only five gold-bound spearheads known from Britain and Ireland. The others are from Harrogate in Yorkshire, Lough Gur, County Limerick in south-west Ireland, and an unrecorded location in Ireland. These would have been especially valuable personal possessions, used to signal status as much as to be used as thrusting weapons. (The Carnoustie example has nicks in its blade, and slight wear to the gold, that suggest that it had seen some use during its life.)

The Carnoustie and Pyotdykes spearheads were not found on their own, and the objects found with them are particularly interesting.

The Carnoustie spearhead was found in a pit, within the area occupied by a Late Bronze Age settlement. It was wrapped in sheepskin, with finely-woven woollen textile around its socket. Beside it was a bronze sword with a pommel made from an alloy of lead with tin, buried in a remarkably well-preserved scabbard made from thin strips of hazel wood, possibly held together by some other organic substance. The scabbard had a metal chape to protect its tip, and a decorative ring-shaped bronze ornament. There was also a ‘sunflower-headed’ dress pin, and traces of a coarser-woven woollen fabric that might have been used to wrap all the metal objects before they were buried. 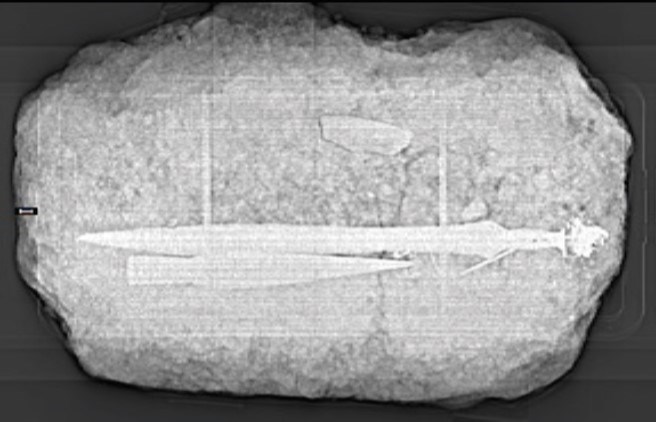 X-ray of the Carnoustie metalwork deposit after it was lifted intact in a soil block, and before it was excavated. The sword and spearhead can be seen clearly, while the broken shank of the pin can be seen below the hilt (handle) of the sword. The vertical lines are the ghostly traces of the plastic baker’s tray in which the block was stored. Image © GUARD Archaeology.

The Pyotdykes deposit had consisted of the spearhead along with two swords. One of the swords had been buried in a scabbard made from hazelwood, this time sandwiched between two layers of tanned cattle skin. Inside the socket of the spearhead was a ‘plug’ of woven textile, originally identified as linen (although we can’t rule out the possibility that it had been nettle-fibre fabric). The function of this ‘plug’ had probably been to help the wooden spear-shaft sit snugly in the socket when the spearhead was attached to its shaft. When buried, though, both the Pyotdykes and Carnoustie spearheads had had their shafts removed. 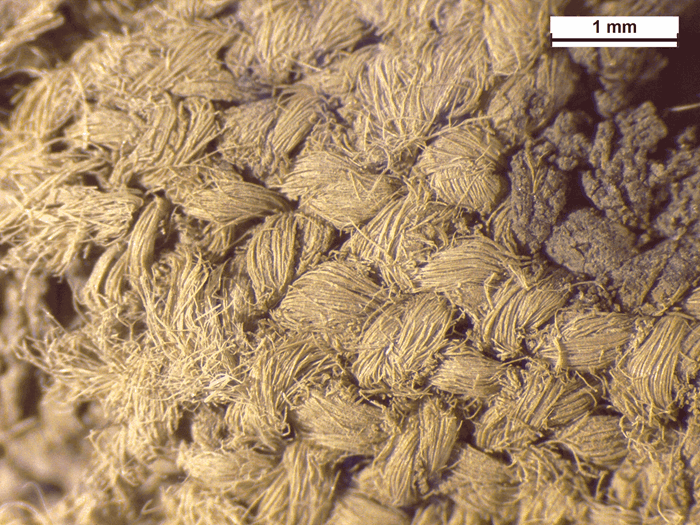 Microscope image of the woven fabric ‘plug’ found inside the socket of the Pyotdykes spearhead. Photo by Alison Sheridan.

Radiocarbon dates obtained for the scabbards from Carnoustie and Pyotdykes have shown that the Carnoustie deposit is the slightly earlier of the two, at 1120–920 BC, while Pyotdykes was deposited around 900–790 BC.

In each case, these deposits represent the wealth of an important, high-status person; we assume that these belonged to community leaders. Why these precious possessions were buried remains a slight mystery: was it to keep them safe? Or were they presented as gifts to the gods? The fact that the Carnoustie items were within a settlement may support the ‘safekeeping’ idea.

The forensic work that was done on the Carnoustie finds has revealed a wealth of additional fascinating details. You can read an interim report of the finds here.

We are grateful to Warren Bailie of GUARD Archaeology for permission to present these details of the Carnoustie find, and to Christina Donald of The McManus: Dundee’s Art Gallery and Museum, for permission to reproduce the photo of the Pyotdykes spearhead. Thanks, too, to Dr Susanna Harris, Glasgow University, for a discussion about the Pyotdykes fabric.