The kingdom of Benin

One of the most powerful kingdoms in west Africa, the kingdom of Benin, prospered from the 13th to the late 19th century in what is now Edo State, in the southeastern region of Nigeria.

The kingdom was founded in around the 10th century by the Ogiso, a ruling dynasty who consolidated power through a centralised administrative and political system. They also established the beginnings of Benin’s royal craft guilds, which led to the development of the kingdom’s unique artistic traditions in carved ivory, metalwork, and wood carving.

In c1200 CE, the Ogiso were replaced by a dynasty from the neighbouring kingdom of Ife. The new ruler, Eweka, took the title of Oba, as the highest political and ruling authority in Benin. Under the Oba, the kingdom, administered from the royal palace and with Benin City as its capital, grew and flourished

Guilds of specialist craftspeople, controlled by the palace, produced a wide range of highly accomplished works for the royal house. This art was central to court life and rituals. Craftspeople created works to mark rites of passage such as birth, marriage, and death; for the annual commemoration of historical and mythical events; to honour the ancestors; and to celebrate the coronation of a new Oba. As such, these objects record the history of this powerful empire.

The 15th and 16th centuries represent the period of Benin’s greatest territorial expansion through military conquest, north and southwards towards the coast. It is also the period when Benin made contact and began to trade with Europeans. New materials became available, first imported by Portuguese traders, including cloth, and coral beads which, with ivory, became symbols of power and prestige that were incorporated into the royal regalia of the Oba and his court officials.

Among the many objects created for the royal house, commemorative heads were especially important in court rituals. From around the 13th century, each new Oba would commission a new head, to legitimise his claim as heir, to consolidate his kingship and to honour and commemorate the royal ancestors. Cast in brass and topped with a large elephant ivory tusk, each head was richly carved with notable events and accomplishments from the life of the previous Oba. It was placed on an ancestral shrine inside the royal palace, accompanied by other ritual objects including rattle staffs, bells, relief panels and ceremonial swords.

In Benin culture, the head is associated with knowledge, intelligence, character, judgement, and family leadership. In this way, commemorative heads were powerful visual references to each ruler’s destiny, authority, wisdom, success, and happiness. Royal ceremonies were performed each year to strengthen the Oba’s head. 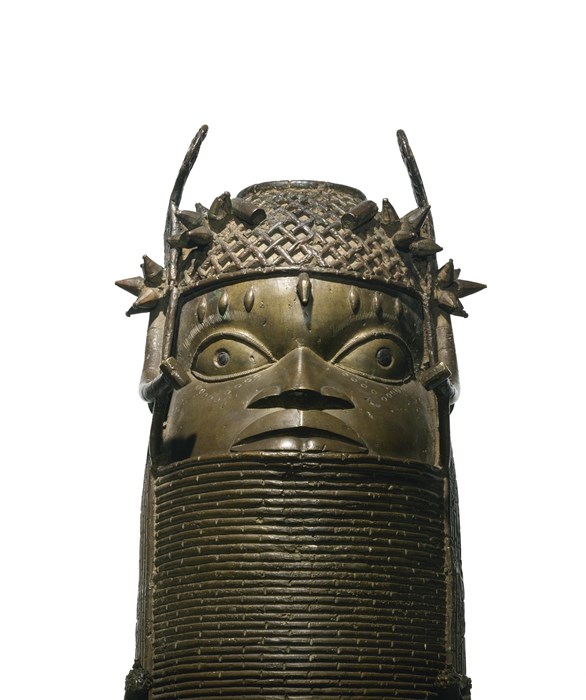 Commemorative head of an Oba (King), of cast brass/bronze, hollow with large opening in the top, decorated with elaborate winged headdress and coral beads on a base decorated with royal symbols of leopards and mudfish: West Africa, Nigeria, Edo State, Benin, 19th century (A.1898.381)

The style of the heads changed over time, and art historians have developed a timeline which recognises eight stylistic variations of heads dating from around 1400, with both constant and innovative design details. National Museums Scotland’s collections include a later commemorative head that dates stylistically from the 18th to 19th century. The head can be dated by the presence of winged elements on each side of the cap, and a flanged base richly decorated with royal symbols of leopard, mudfish, and the heads of sacrificial animals. Like the older style heads, details include multiple rows of coral beads around the neck and a coral bead cap, worn as symbols of kingship to the present.

During the second half of the 19th century, Benin began to lose its military, political and economic supremacy as family rivals fought for power and control of the throne. At the same time British imperial desire for control over west African goods and territory led to increased pressure on the Oba to open Benin territories for trade under British rule. The invasion of Benin by British troops in 1897 resulted in the removal and exile of the reigning Oba Ovonramwen, who was replaced by British indirect rule – a colonial system of governance which maintained control and administered Benin’s territories through local rulers and traditional political institutions.

Following the death of Ovonramwen in exile in 1914, his son was crowned Oba Eweka II, ruling under indirect rule until Nigerian Independence in 1960. Eweka II rebuilt the royal palace, restored the craft guilds, and set up the Benin Arts and Crafts Council to produce artworks for new external markets. Since then, the descendants of Benin’s ruling dynasty have preserved their title, status, and cultural traditions in Benin City where the monarchy remains a symbol of continuity and unity.

Find out more about the head and other objects that were looted from Benin during the British Punitive Expedition in 1897.